Motorola RAZR V3 – a look back 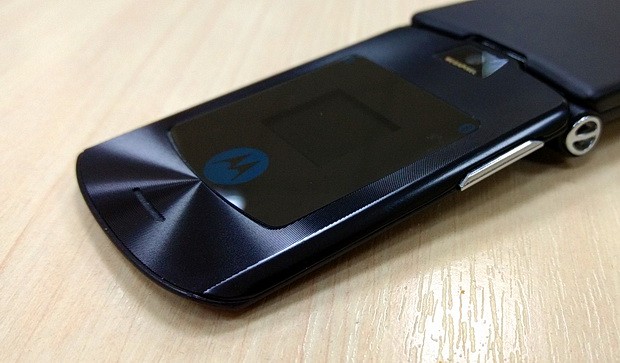 Today we go back a bit in the past and remember the phone that changed page in the history of mobile phones – the iconic Motorola RAZR V3. And compare it with the current flagship: Galaxy S8 iPhone 8 and the Xiaomi Mi6.

Many, if not most, mobile phone owners want to own this stylish, sophisticated design of the apparatus. And remember the Motorola RAZR V3і, with its metal buttons and an unearthly bluish light. It was a “status symbol” at that time, which today are the flagships of the leading manufacturers in the world.

The history of creation

Yes, there was such a stylish phone. And we would like to conduct such a comparison of some features of Motorola RAZR V3i, the flagship of the period, with today’s top phones. And victims of comparison will be the Galaxy S8 iPhone 8 and the Xiaomi Mi6. Well as victims — think about them a couple of times. 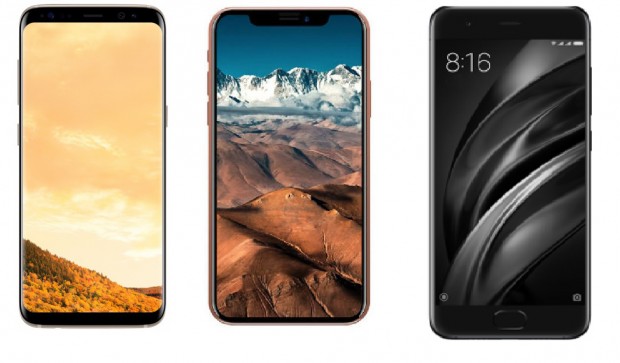 And first we will briefly remind you about the phone that changed the world of gamers. This device was one of “reference points” in the world of mobile phones, i.e. points after which there are drastic changes. As of 2003, Motorola was on “the edge” and to save her could only wonder. And this miracle was phone RAZR V3 with its incredibly beautiful design.

At the moment in the market dominated mobile phones in the form of a small block with a monochrome screen. 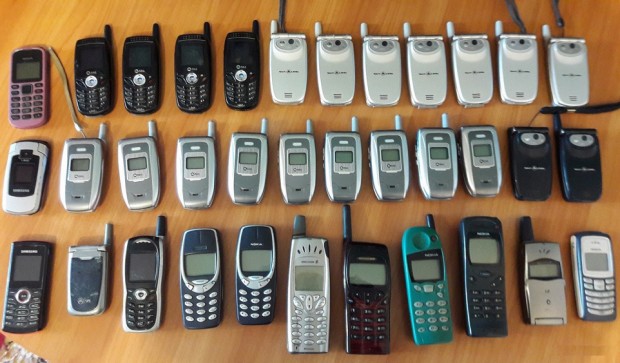 I would like to quote the chief designer of Motorola that period Jim weeks: “At that time, all the phones began to become such uhvatisty, without striking features, shapeless things. Because the idea of stepping outside was a very, very unusual, went against everything that the others have developed in the field of mobile devices”. Price segment of such cubes, as a rule, were low. RAZR V3 was completely different. 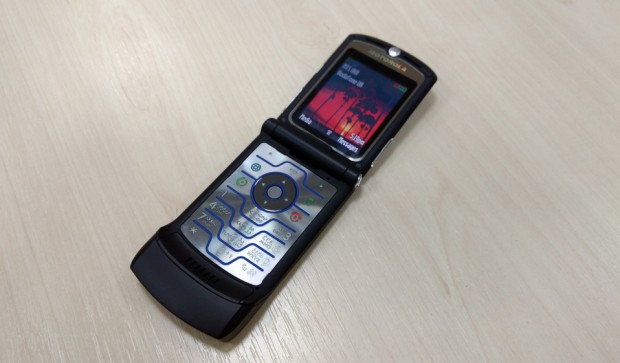 And in terms of design and in terms of price, with which he started, by the way, without the prior mass advertising in the media (the company simply did not have on it money). The cost model was a record at the time $550. Comparing with our flagships, we can say that at the same price level with our “engine” turned out to be only Xiaomi Mi6, and the remaining two flagship “float” in the neighborhood of $1000. Agree, a lot of money for a mobile phone.

Despite the high cost, the RAZR V3’s blowing off the shelves like “hot cakes”. Slim, stylish, metal – like blade. By the way, hence the name, in English RAZOR means “razor”. As for sounding “lost” the letter “O”. And again with the RAZR V3 to use enter the words with the prefix MOTO MOTOFOLIO, MOTOTECH, MOTOCHIC, MOTOMEDIA, MOTOLIFE.

READ  Two destinies, one person: the amazing story of a face transplant patient 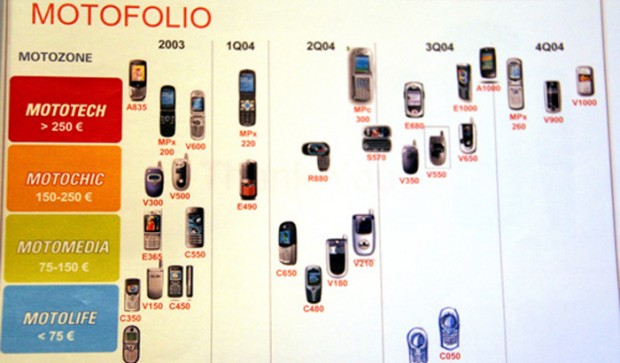 Undivided dominion RAZR V3 on the market lasted almost a year. None of the competitors could not reproduce anything like this- it was a real shock for all competitors. In General, the average “life” of the model was in good “hands”, not more than one year. 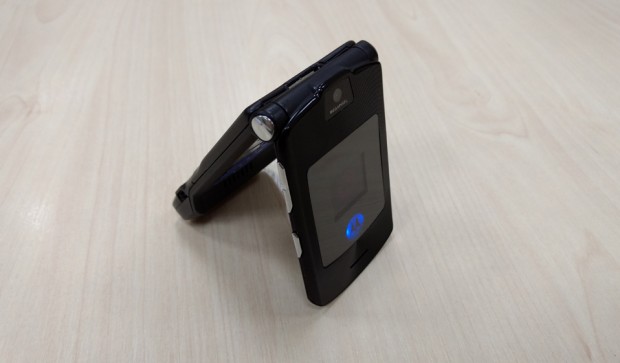 RAZR in its various modifications has existed on the market four! Tell me — who of brands can boast such a result? Yes, not one of them.
It is also worth mentioning the appearance of Motorola RAZR V3і in the set of gifts for actors and Directors at the 77th annual ceremony of the Academy award (“Oscar”). 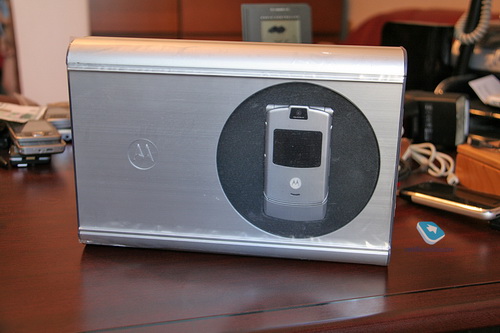 In the set, incidentally, was and Samsung A790, which nobody noticed. 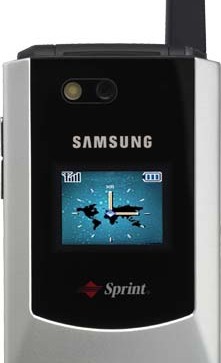 Yes, your Motorola RAZR V3і used Madonna, and she’s not the only one. And it was not easy to use and the deliberate use of the phone “in public.”

Touch appearance of this mobile phone. Almost the entire body was made of anodized aluminum. For complete tactile and visual satisfaction of the user from the use of a metal housing, Motorola used a mechanical engraving to obtain a kind of concentric pattern on the surface. 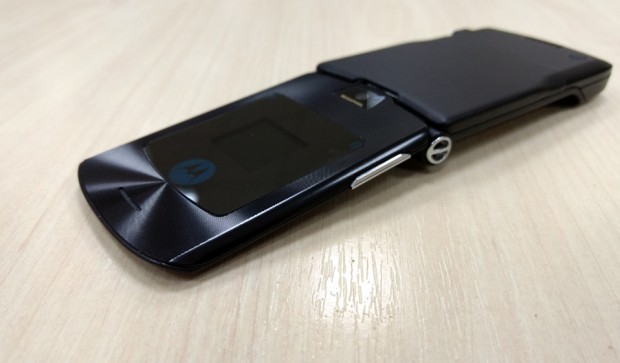 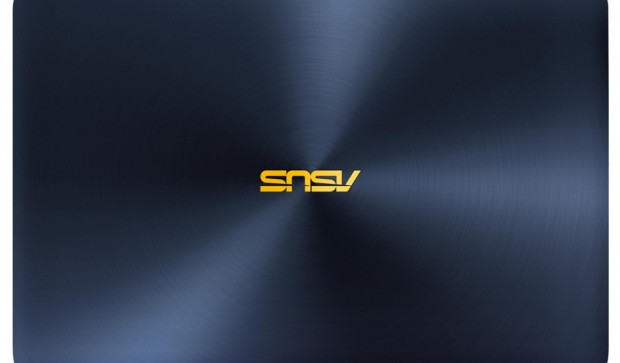 The screen on the outside of the housing is closed by tempered glass, which in itself was a novel idea. It later was intercepted by competitors. 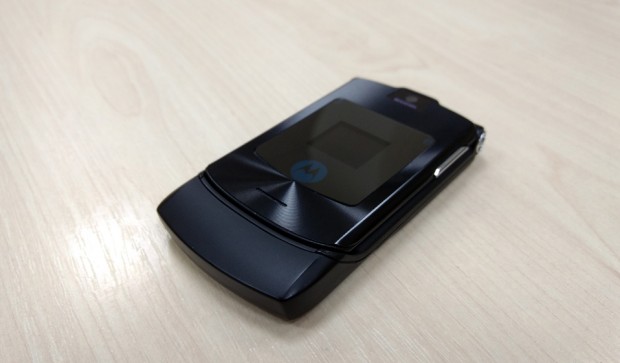 If you remember, before the era of smartphones our phones every year decreased in size – was a trend of “minimalism”. In every company there is a group responsible for the study of human anatomy. And recommendations from these specialists said that the best mobile phone width is 49 mm. now let’s look at the size of the “TV” through which we communicate with you today. Let’s start with the Galaxy S8 – its width is compared to 68.1 mm. Next, touch the revered iPhone 8 – width 67,3 mm. And, finally, the Xiaomi Mi6 – 70,5 mm. Do no good, that is ease of use with one hand — zero. Not that the RAZR V3 is its width 53 mm, almost ideal. If you touch the remaining dimensions of the phablet, it turns out much more sad result.

Yes, try to put your beloved smartphone in your jeans pocket and during the day to walk with him, sit with him a few times. And you will agree with me that it is not enough that is not convenient, and yet a constant thought – “not to break the fuck the repair will cost half the phone…”. Whether the case in question the model of Motorola. Sometimes we even had to Pat the pocket with the purpose of the audit was on the phone. 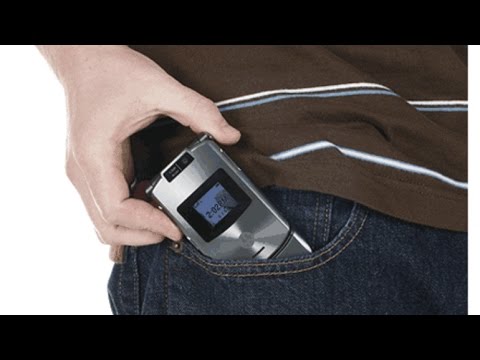 As the saying goes, “usula tabula”. Not until you call and I don’t know in which pocket the phone.

Touch keyboard RAZR V3. She could feel and even “in the blind” to dial a phone number. 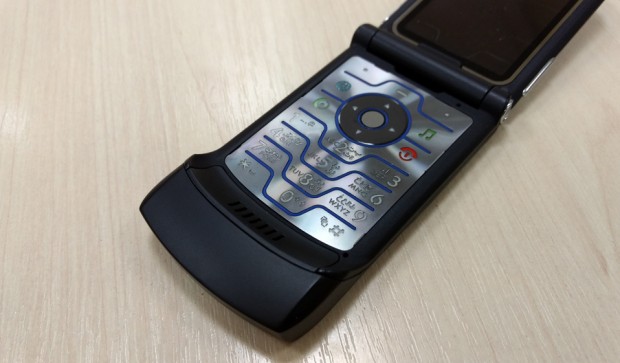 Now close your eyes and dial the number on the iPhone 8. You will be surprised where you call. And how surprised those whom you called. But on the metal keyboard raiser was a meaningful way to dial any number without looking. Although her appearance was made possible, unfortunately, not through the work of a well-knit team and travel to South Korea, where he was awarded a contract for the manufacture and supply of such a keyboard from the company that produces calculators. Then, due to the fact that Motorola was not the patentee, this innovation quickly spread to other brands, and the “highlight” was dissolved. And at that time it was something. This was not anybody. But today’s top smartphones in this plan all on one person.

The number of color offerings, case RAZR V3 with modifications, probably broke all – the phone had a palette of 12 colors. Can you imagine as many as 12 body colors – for every taste. What we see today – mostly two, three, well maybe four colors. And most of them are the standard set: white-black, some red or silver.
However, let’s be honest — one of the flagships almost caught up in the colors of the RAZR V3, it’s Xiaomi Mi6 – 11 colors. Apple decided that the iPhone 8 will need three colors, but Samsung “pull their socks up” and gave as much as five colors for Galaxy S8.

Let’s talk about the stability of the system. We are all familiar with various “bugs” on Android has been updated and here you are: not working camera, the phone discharged quickly, the memory card does not see much more to remember. See how smiled the iPhone stable iOS – do you want them to immediately recall the recent iOS update 11 — the device is discharged, it does not catch the network slows down, freezes. Not that stable in this respect the RAZR V3. 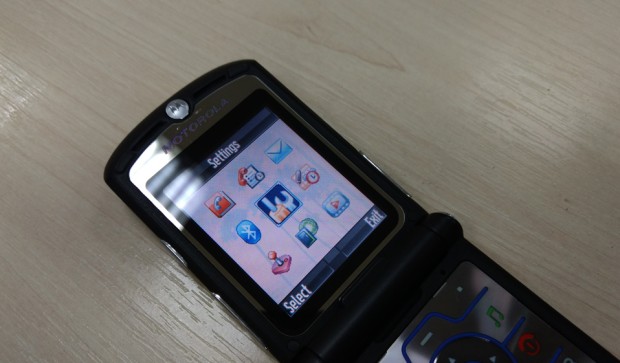 No you glitches, all necessary programs are running “smoothly”, “contacts”, but not flies. And for fun you have as many as three games!

Already at that time the RAZR V3 had the opportunity of voice control. In the phone there is a button for voice commands, that is, assigning a pre-defined menu of voice commands, you can control your phone with your voice. And voice commands are not dependent on the uttering, not required pre-workout. Also the phone present voice dialing. In case there were buttons activate the camera and a “rocker” sound.

RAZR V3 as a multimedia phone

What nowadays, in the 2000s, it was a novelty. Razer was one of the first multimedia phones. That is one of the first mobile phones, “bivshih nail in the coffin” of such direction as an MP3 player. And now attention, a quote from 2005 – “imagine V3i user, who will constantly use the MP3 player. This is not a typical feature for users of such devices”. Here is an opinion existed then. However, the RAZR V3 did not support direct connection of a 3.5 mm Jack. 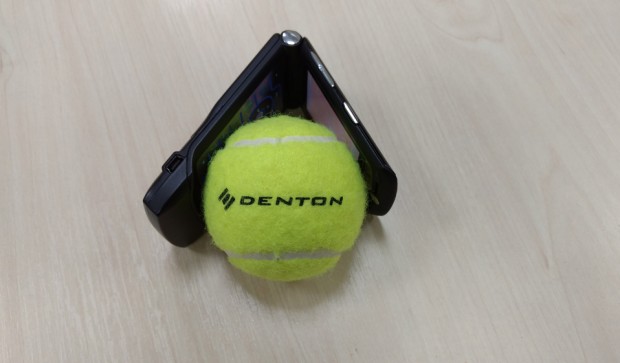 This required a special adapter. That was not very comfortable. In this solidarity with RAZR V3 Xiaomi Mi6 and iPhone 8, which for some reason refused from the popular connector. Can mow at Razer, and maybe just a regular “show off” — “not like everyone else.” But Samsung from 3.5 mm Jack refused. The appearance on the market raiser was a big step forward, which gave impetus for the development direction of music phones. And not only because the built-in MP3 player we should be thankful to the pioneers who developed this area.

There was another “trick” is the ability to take a selfie. Yes, you heard right, in the early 2000s, when it was not yet fashionable. For this you just need to turn on the camera, close the clamshell and voila – external information the screen turns into the camera viewfinder. You just select the view and click a button and your selfie in the memory. 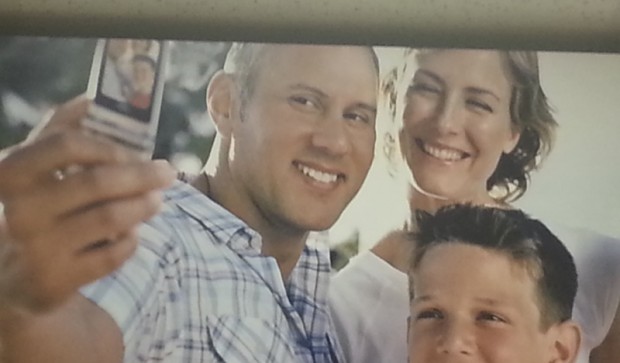 And now: started the camera, switched it to the front and shoot yourself as you like. Nothing new, though no — “screwed” flash on the front of the phone, especially for selfestem. And then “throw” yourself in Instagram, Twitter, and Viber want-om himself “went” to friends. And at that time your “all” is MMS.

Largely RAZR V3 with all modifications ahead of its time and memorable for its own uniqueness and originality. Phones bought not only because of the characteristics or brand — from a technical point of view, he was inferior to many of his competitors. But again, its bought. Users pay attention to appearance and how stylish it looks. Now it is also important, but significant differences in the design of the phone is almost none. Here’s one of you at a distance will be able to distinguish one brand from another phone. A few. And Motorola in those years there was the “rule of three meters.” That is, any established rule on this phone had to be recognized from a distance of not less than three meters.

Whatever you say, but in terms of design before doing the posh stuff. Not now — with the sameness of everything. The only difference in size. Now more and more are chasing performance. Not to say that it’s bad, but I would like more bright design solutions. 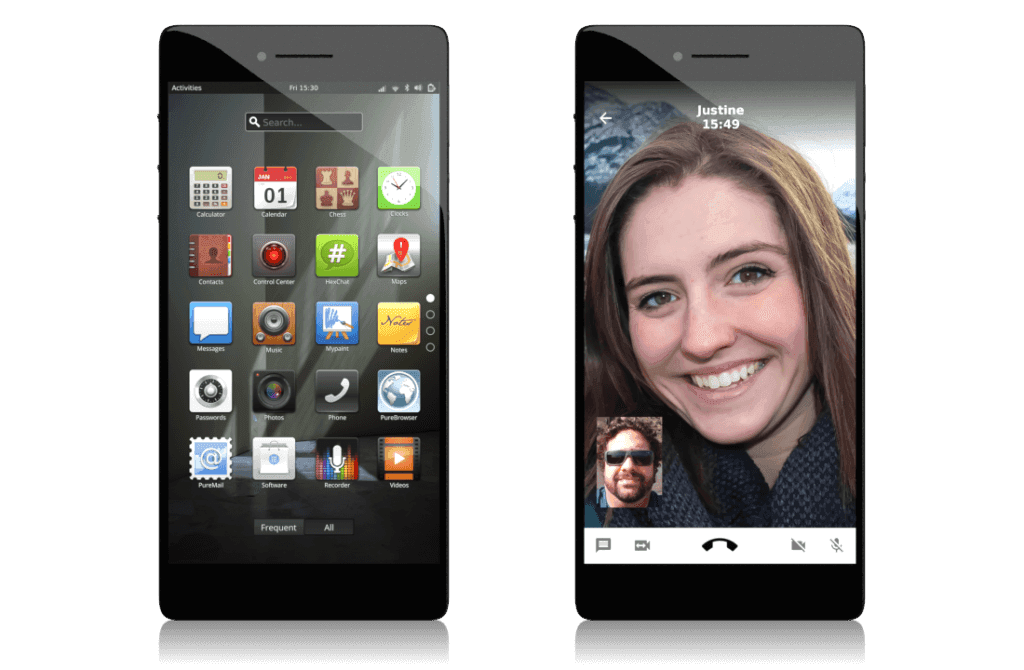 Librem 5 Delayed Due To Battery Bug, Shipping To Begin April 2019 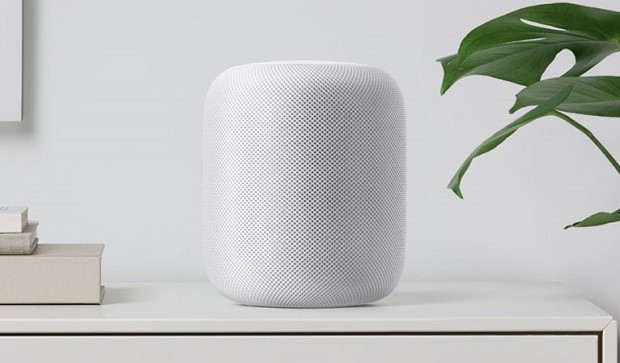 Apple introduced a competitor to Google Home, and Amazon Echo 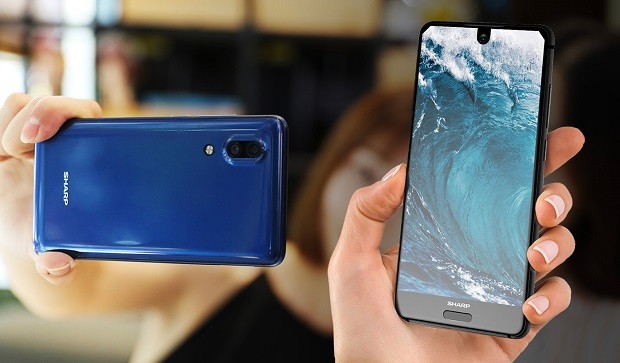