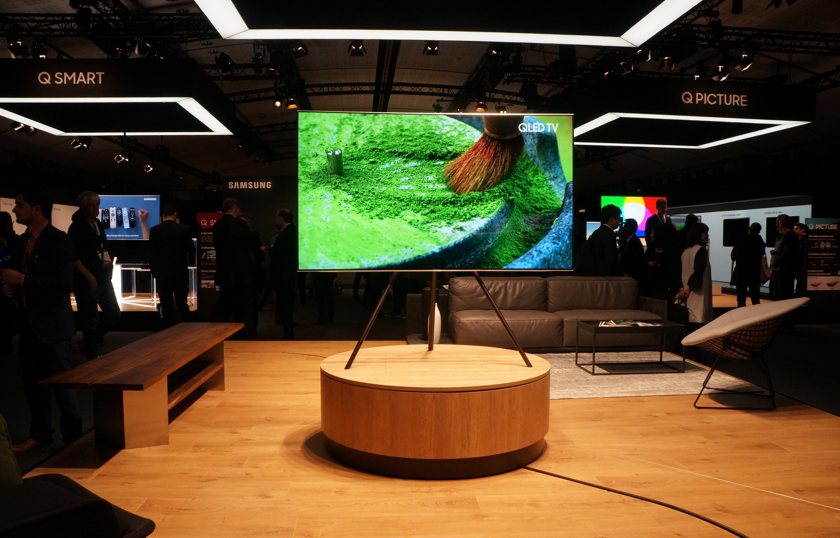 Premiere of the flagship line of Samsung TVs in 2017 took place during CES in January 2017. March 14, the TV was officially launched in Europe, where he was invited editorial gg. These TVs use the latest technology of quantum dots and was called QLED TVs, where the letter Q plays a significant role. First, it declares the new generation of TVs (just like a few years ago, we learned about LED TV sets in which lights were replaced with LEDs, which allowed to make a technological leap in brightness and reduction in the thickness of the TV). Secondly, the logo QLED comes into an irreconcilable struggle against OLED TV rivals and to signal to partners and customers: this uncompromising technology for those who want to buy an OLED TV. What are the advantages of the technology and features of the new line of QLED TVs in 2017, which consists of three series: Q7, Q8, and Q9 with diagonals from 49 to 88 inches?

We all have become accustomed to the format of presentations that use huge screen and alternating with the clear timing and the teleprompter speakers. But this time Samsung has surpassed itself in the visual picture. Backgrounds were replaced with kaleidoscopic rapidity, scene went the platform with the interiors of the apartments, and vivid picture of Paris, which hosted the presentation, conducted an unequivocal link between QLED TVs and works of art belonging to the world heritage list. In addition or am I behind the times, or the projector during the presentation gave so vivid a picture that the photographs projected backgrounds look real. Here are a few shots from the presentation itself, just to assess what is happening, try to guess what the backgrounds are real and which ones — only image.

As in TVs last year, Samsung uses a design approach in which the TV must look good even from the backside. With feet, giving the TV a view of the easel (again, by the way, the Association with a work of art, which is a TV) it looks interesting, although the functionality, of course, does not affect. But in the older models of TVs design have always played a major role for the target audience. 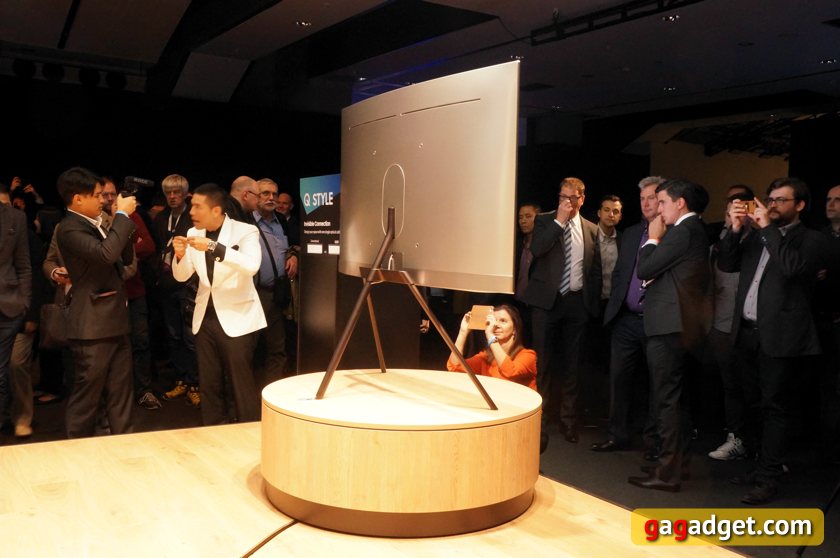 Speaking of legs — their three options, one in the shape of a cone is called the Gravity Stand (gravity). In Samsung say that the design is reminiscent of modern sculpture (and for sure it allows to swivel the TV around its own axis). 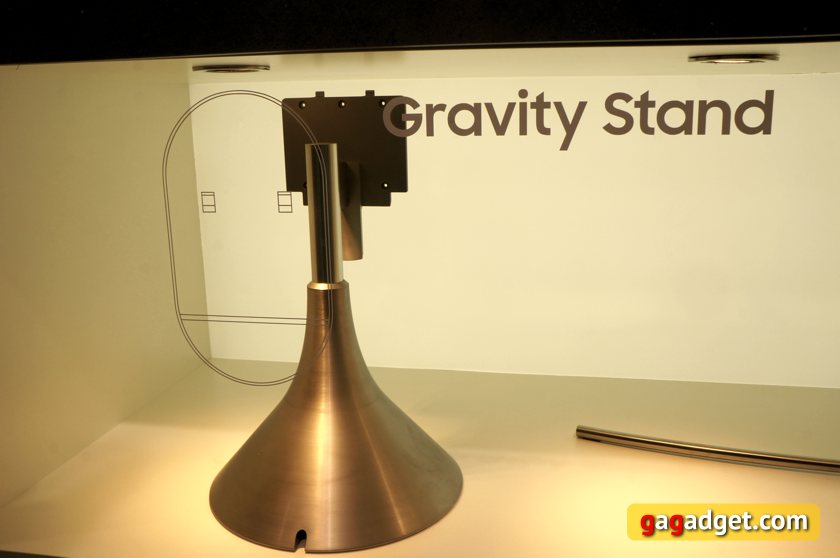 The legs are some species that theoretically, they can produce third-party manufacturers and design studios to order. 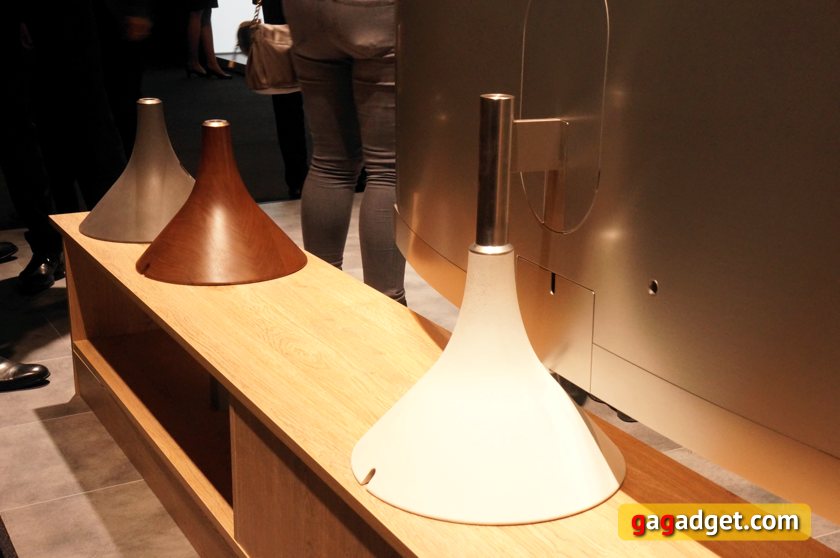 For TVs with curved screens are a stand Basic Stand that also have a bend. 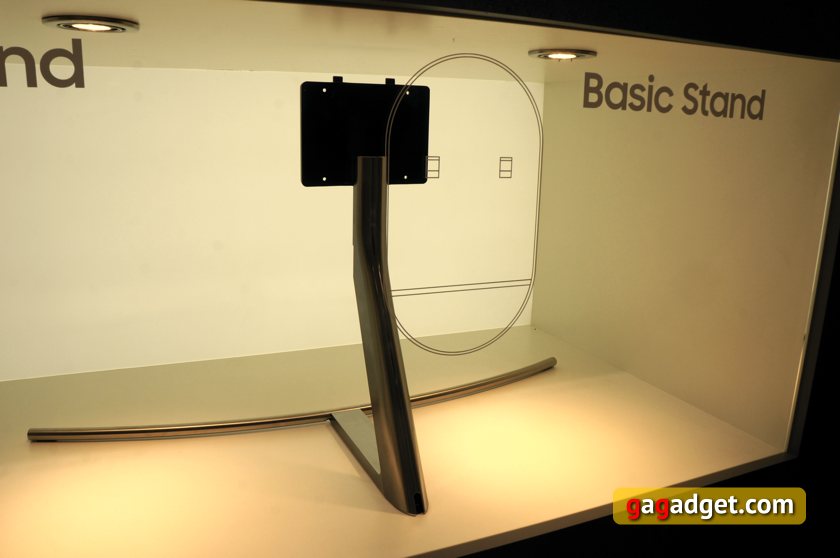 Finally, the legs of a Studio Stand, like I said, give design similarity with the easel. 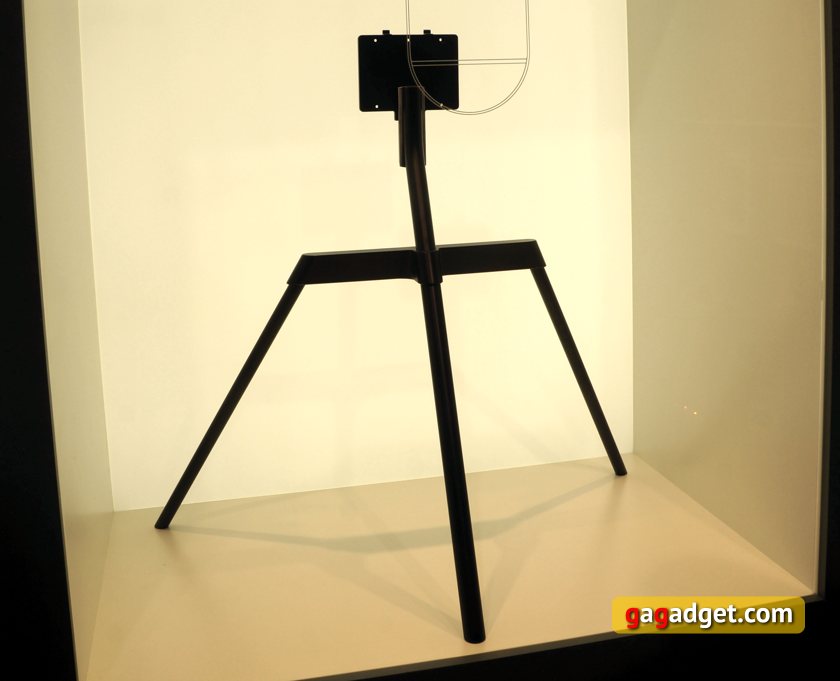 Here is a mount stand rear upon closer inspection: 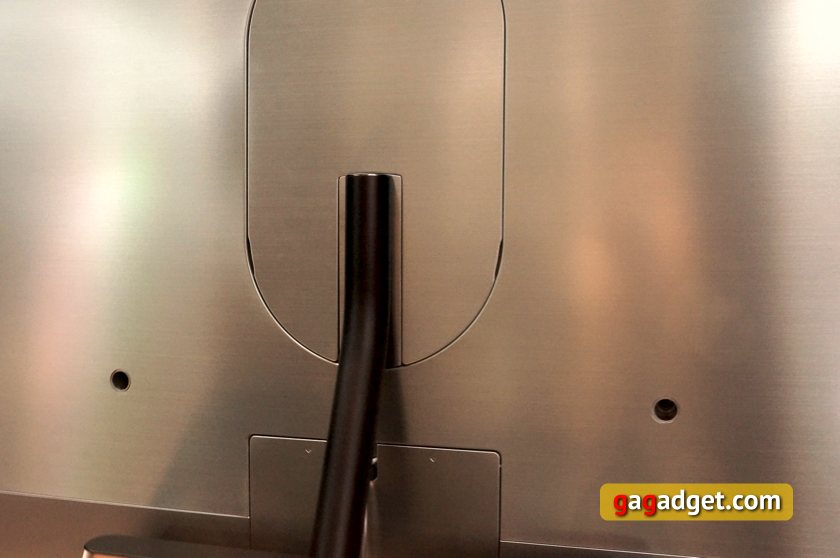 But the option of mounting the TV to the ceiling on a rod. The cable in this case was brought in through the bottom, but with the same success it was possible to have and top. 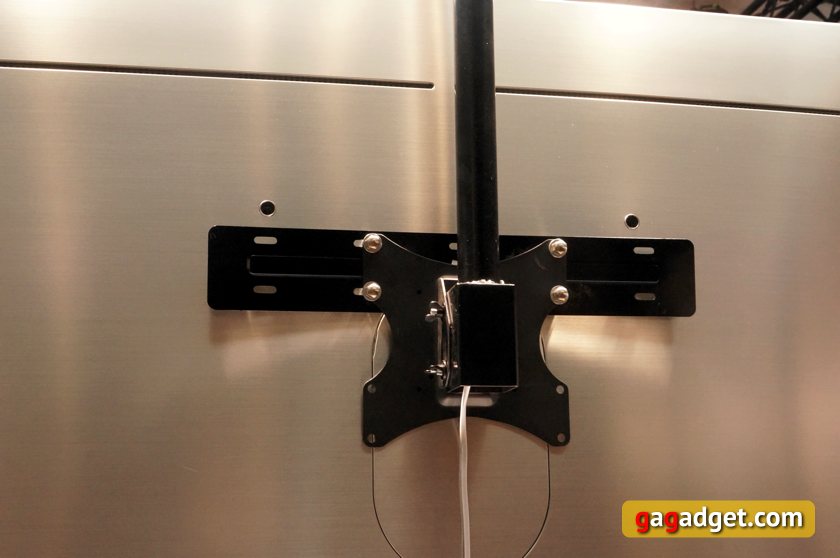 Another subject matter of engineering pride — mount for placing the TV on the wall. In Samsung call it a No Gap Wall-mount, i.e. “wall mount with no gap”. Between the wall and the TV is really a very small space, the account is already in millimeters.

Fasteners for wall mounting option TV on the rear panel: 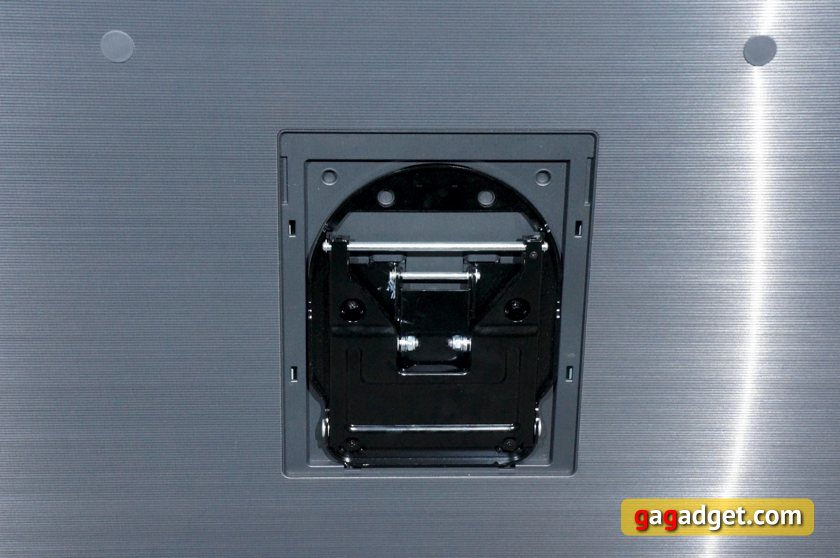 QLED TV is not only about quantum dots and about design. They, like the flagship of the line, a few eye-catching features, among which the so-called invisible cable (Invisible Connection). Of course, the wire is visible, but it is really less noticeable, so we are talking more about the marketing name for optics. 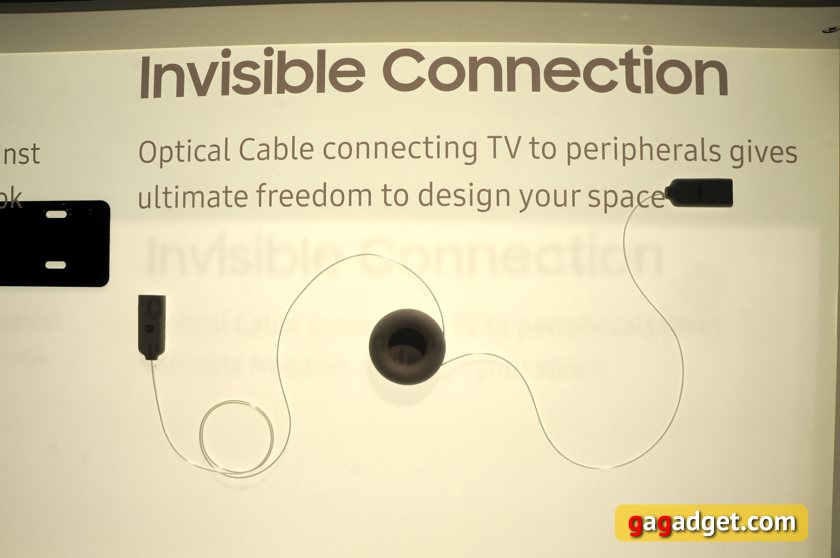 In fact it is the optical cable with a stated bandwidth of 7.5 gigabytes per second. With the help of the outdoor unit connections (they were handed Samsung a few years ago, after the TV is very large and very thin). Call it invisible — an obvious marketing exaggeration, especially since the power cord is still needed separately. And the filing of this feature QLED TVs looks weird — no one had never bothered to hide all the wires including the power cord inside the wall. In the end, do not buy a TV for 1-2 years, 5-10, and under it you still need to prepare the wall in the apartment or house. Samsung thinks so can be beautiful “get rid” of all cables connected to the TV devices: gaming console, a Blu-ray player and what else is connected? All this, however, does not negate the uniqueness of this solution — you’ve seen a lot of optical cables in TVs? And optics can transmit huge data flows that are ahead of us with development permits Ultra HD. 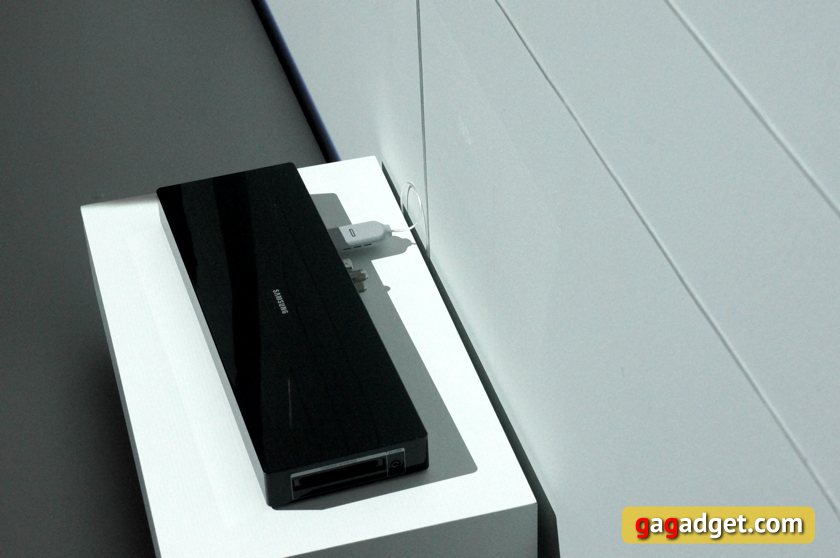 A separate discussion is the management of TV: Yes voice control, universal remote called One Remote Control and allow you to control all connected TV devices. And the Smart View app for Android and iOS. Voice control is improving every year and is still working in English, but they say that it’s now smarter and allows, for example, for the query “Comedy” or “action” to find even cable TV, which currently broadcasts the appropriate films. Not to mention the search inside video: YouTube, Netflix and so on. 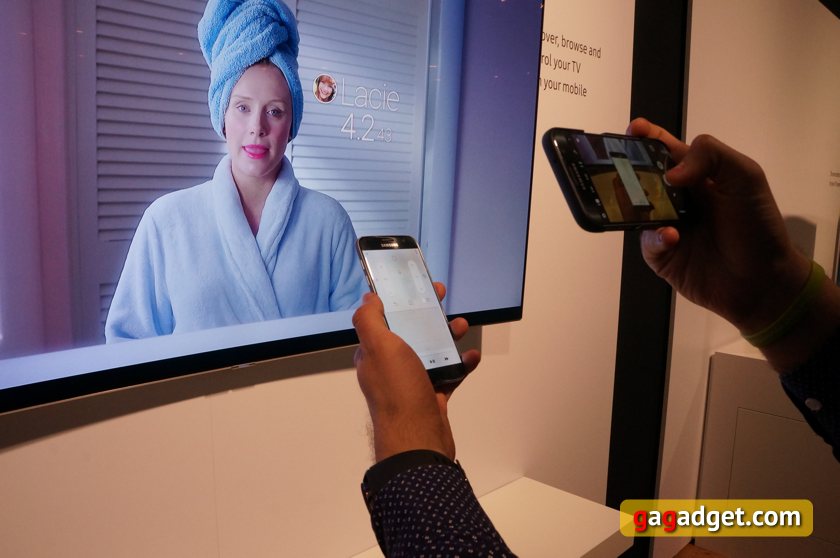 Another innovation this year is a separate designer line called The Frame, which the manufacturer generally makes a separate category of devices, so to speak, beyond (pun intended!) TVs. They allow you to use a specific designer frame that turns the device into a picture on the wall (and is featured in their spare time, patterns). The selection of frames is great and some of them even in the summer will be available in some volume in Ukraine. In most companies, of course, do not consider this segment of the mass market, but then you need to understand one simple thing — buyers of the most expensive models often tend to have things very different or even existing in a single copy. It’s very niche, but very attractive for producers and sellers of equipment market segment. Though, because these buyers are practically not sensitive to the price factor. Rather, for them, the more expensive the better. Well, and sales of such equipment are rather than through stores, the company specializing in the preparation of the premises and their equipment is the Hi-Fi. And sold as part of a comprehensive (including interior) solution. 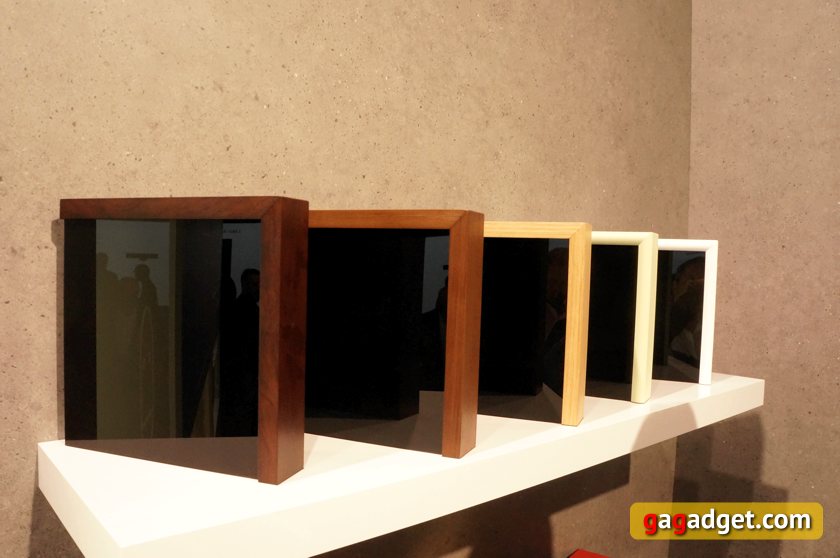 Here’s another frame options, converting the store into a small analogue of the framing: 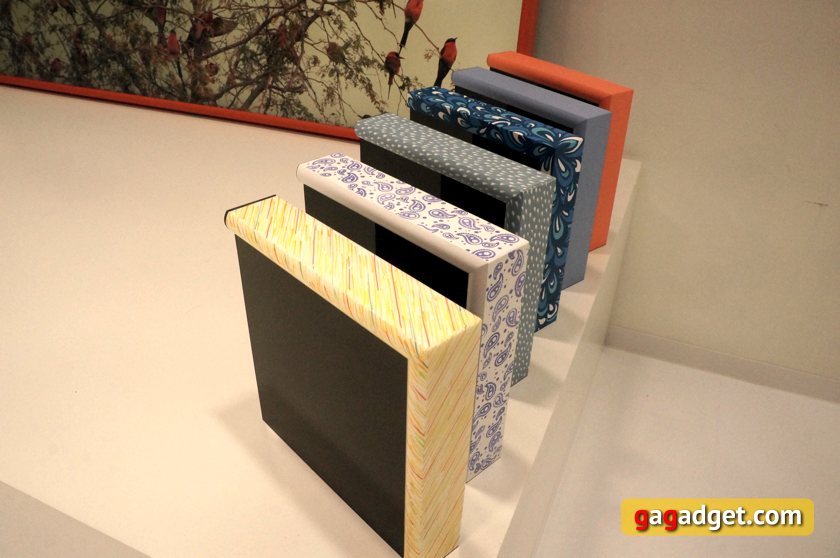 Another interesting concept with designer frame. It’s called Serif TV, but we will not be sold. 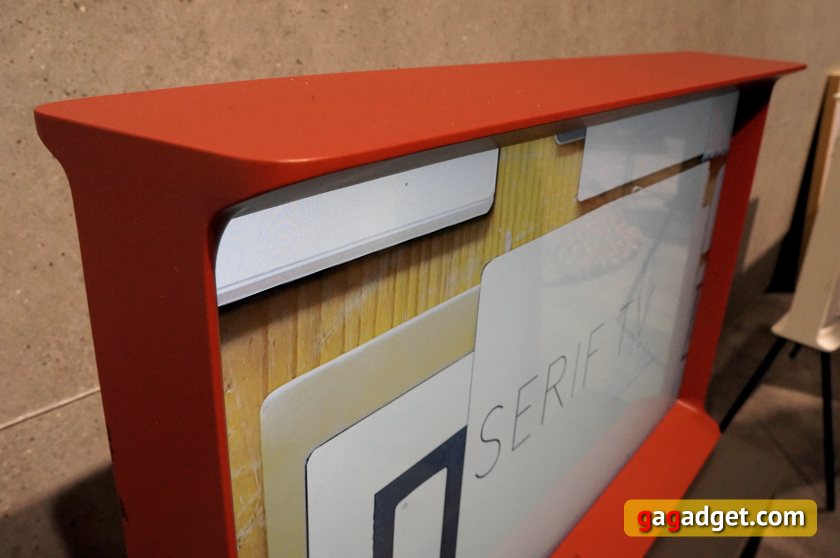 Instead of wood/plastic can be sheet metal: 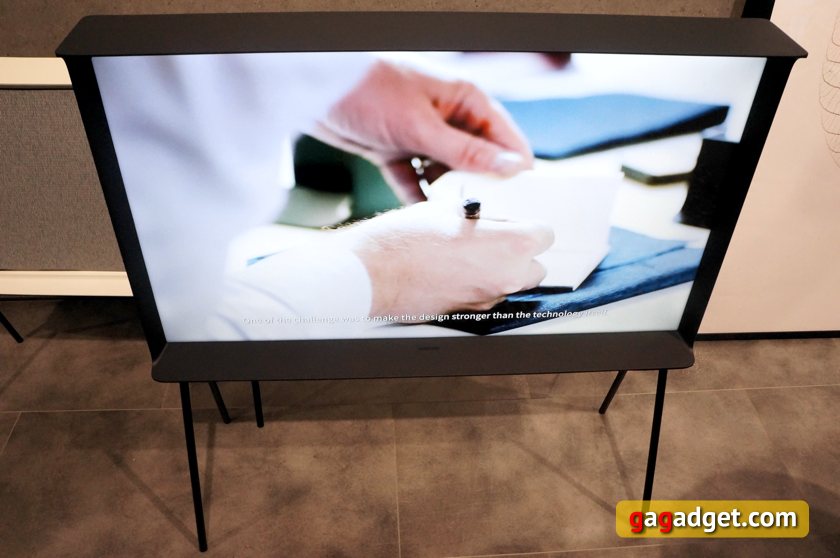 All ideology works of art was in the air. Especially if you remember that the presentation itself was held in trade exhibition center Carrousel du Louvre , two steps away from the Louvre. 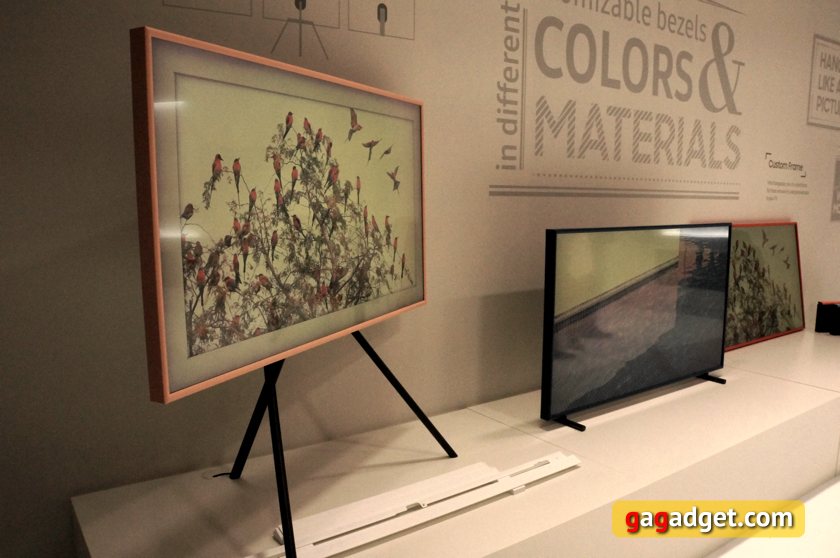 To further and more clearly to emphasize the idea with frames and paintings, the hall was equipped with a single wall. It was like a panel line, The Frame, and conventional paintings. The concept of The Frame allows to change the perception of television in the interior in the off state. In the “Art Mode” it the screen is not dimmed completely, and transmits one of the 100 images in 10 categories.

What is quantum dots?

In fact, quantum dots are an additional layer between a led and LCD matrix, consisting of a very thin film of liquid metal substance, inside of which are semiconductors (those “quantum dots”) the size from 3 to 7 nanometers, which is (and this is a key distinction) light sources. They are able to absorb light waves of the same length (this uses blue LEDs) and emit light of a different size depending on its size. Point generate more red points less green. Trillions of these quantum dots allow us to emit white light with the exact wavelength of red, blue and green that makes the picture more clear and vivid. In the TV series Q7 and Q8 light brightness 1500 NIT, TV series Q9 — 2000 nits. If just to simplify the explanation, the quantum dots signify two important characteristics of a TV picture — more light and more color. With the consequences of more black in the absence of light.

LED television sets were also used matrix illumination: located on the perimeter of the screen (thinner and cheap solution) or over the entire area of the screen (the more expensive the solution affects the thickness of the screen, but allows you to control the local dimming that gives a deeper black color). Quantum dots are also placed on the whole area of the screen, while they hardly affect the thickness of the TV, but allow you to achieve a brighter white and deeper black colors than traditional TVs. Moreover, unlike OLED TVs, they are not subject to the known effect of fading matrix with your life. 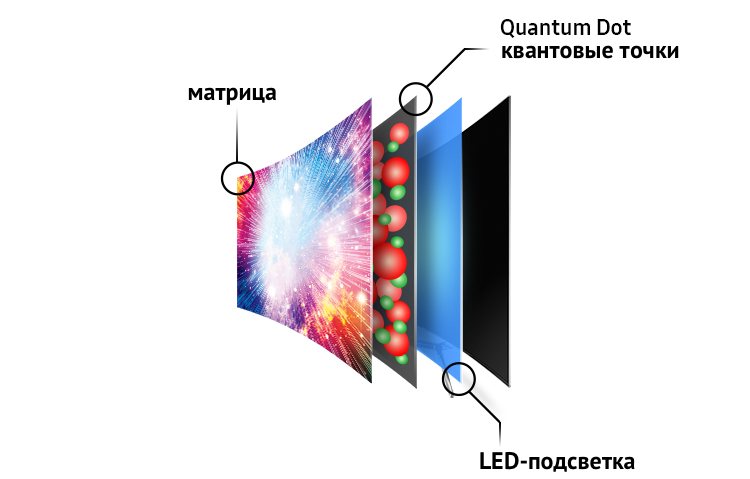 Five numbers that are worth remembering about QLED TVs Samsung 2017

Docking station Samsung for Galaxy S8 DeX will get active cooling
Russian announcement of the flagships from Huawei: what do we know about new 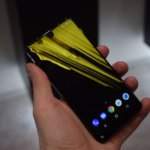 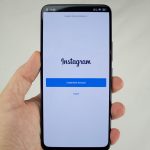 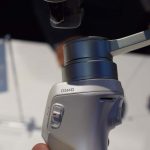