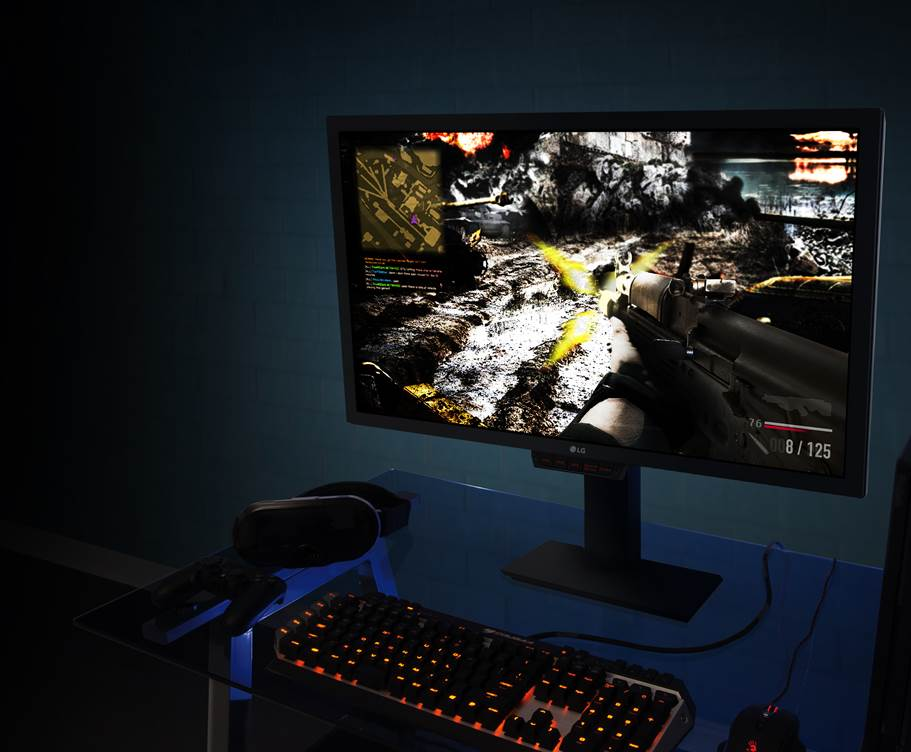 Game themes now become popular and most manufacturers of electronics in one way or another trying to join this trend. LG is no exception. The Korean company already has in its Arsenal a full range of gaming monitors with different set of capabilities for every size wallet. In the editorial gg already has been stuffed with a 34-inch curved IPS monitor LG 34UC79G with an aspect ratio of 21:9. Of course, the price tag there is very impressive and not everyone can afford. There are models and more modest, such as LG 24GM79G that we have just in the wording.

LG 24GM79G is the most affordable in the lineup of LG gaming monitor with a frequency of 144 Hz. It is equipped with a 24-inch monitor with standard aspect ratio of 16:9 and a resolution of 1920×1080. Use of the fast TN-matrix with anti-reflective coating, to connect a pair of HDMI, DisplayPort, USB hub and headphone Jack. 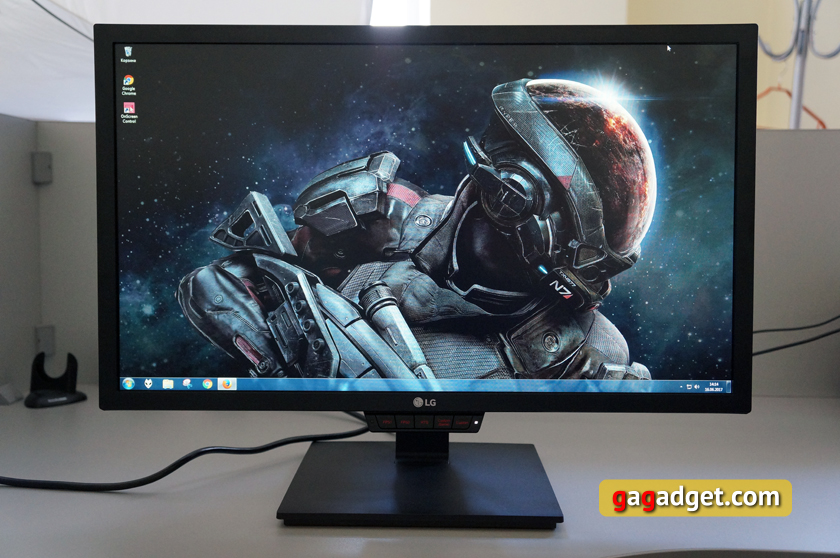 We’ve learned that most monitors are now used IPS-matrix because of better colour reproduction and maximum viewing angles. They do have their advantages, but some gaming models are specially manufactured with TN-matrices (as in the case of LG 24GM79G): they are faster than IPS, which is very important in dynamic games, and the cost is significantly lower. Of the features of the LG selects the maximum refresh rate of 144 Hz, which has already been mentioned just above, the support for AMD FreeSync to sync the framerate of your monitor and Radeon, 1 MS Motion Blur Reduction to prevent blurring of objects in dynamic scenes, Dynamic Action Sync to reduce input lag and stabilizer in black color for highlights in dark areas. All this we’ll talk in more detail below.

What’s in the kit? 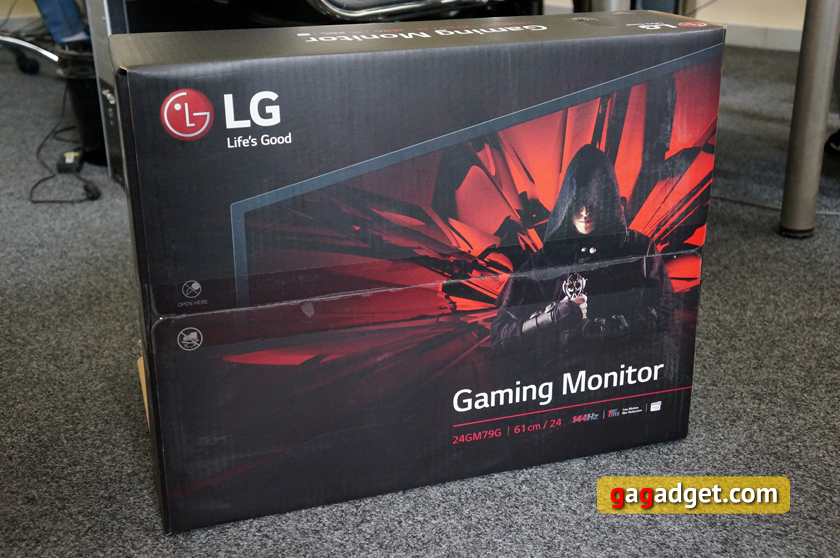 The monitor comes in a black box with a lot of printing and a brief description of the technology. Inside it is in a disassembled state, to collect the stand and tie it to the monitor. It does not cause any difficulties. Useful included is a removable locking of the rear cables, DisplayPort cable, by itself, power cable, CD with software and manual: 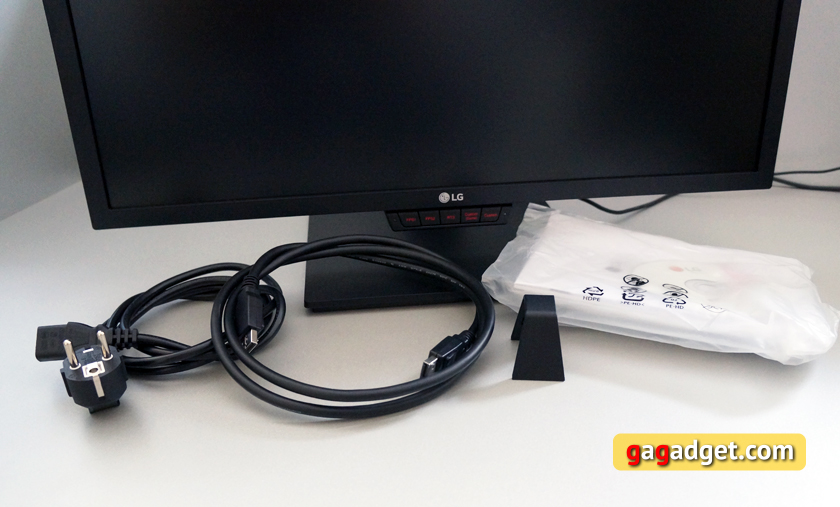 How does he look?

We’ve learned that the game models look aggressive and servigliano. None of this is observed in LG 24GM79G, it looks more like an office version. The case is made from a practical matte plastic, no design frills “type of bezremontnoy” (as it is now can) monitor no. Around the screen — the usual black frame. 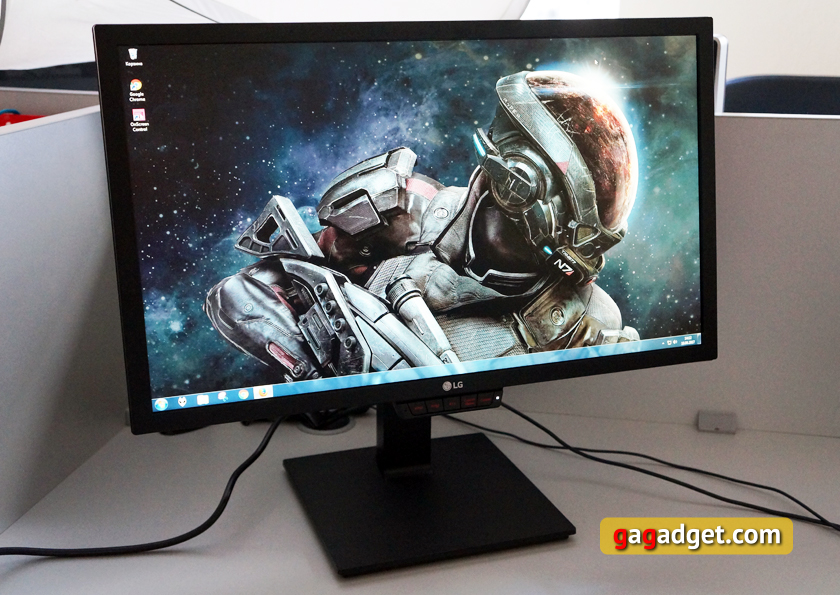 Below the screen is the LG logo and the block with LEDs and buttons to quickly switch to a different game presets “on the go”. For example, default modes, FPS1 and FPS2 is designed for lighter and darker maps in first person shooters and using the buttons you can turn on the desired mode immediately, without the need to go into the settings menu: 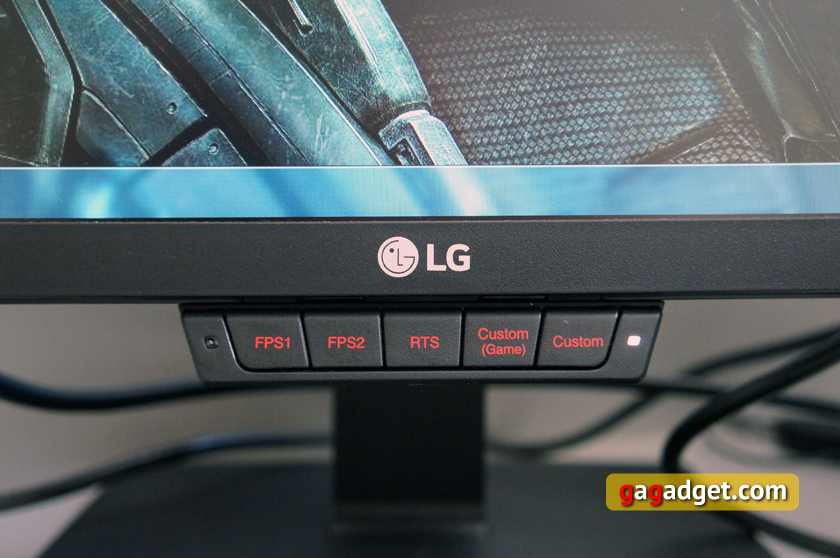 To configure the bottom provides a traditional for all current models of LG five-way joystick, but the devil is highlighting in this case: 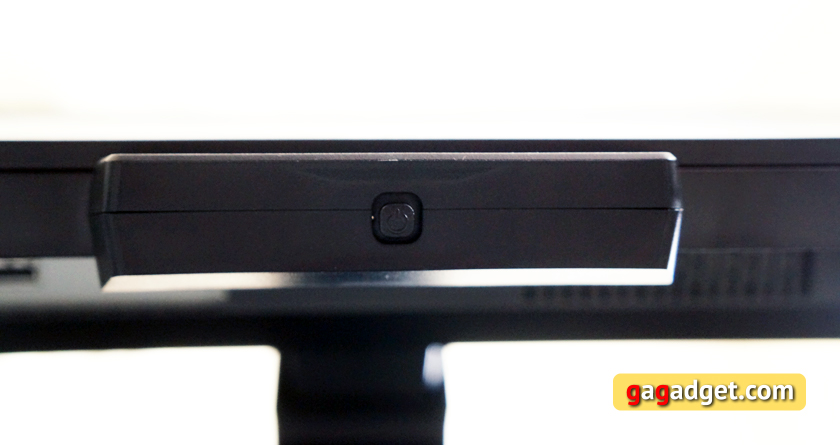 The stand is square shaped, black, with a matte finish. It is quite massive, so that the monitor stands securely on the table and tilting it very easy: 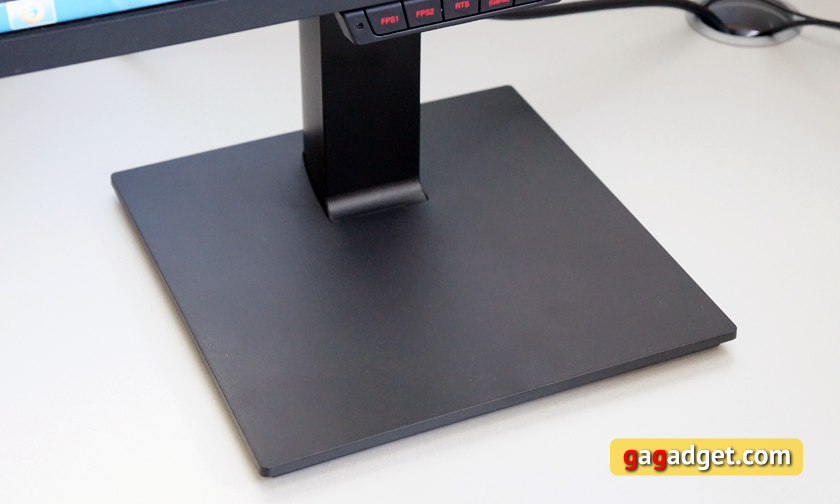 The leg is attached to the monitor using the site in a special niche and is fixed for reliability using four screws: 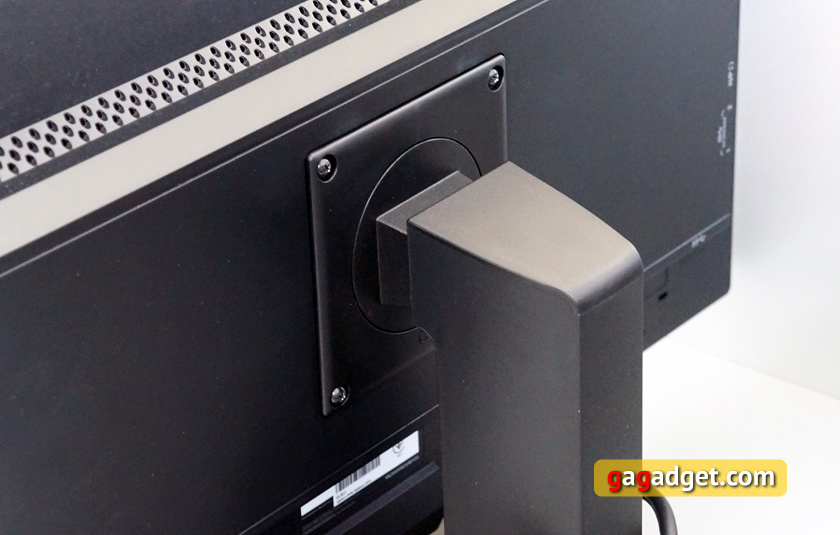 The rear of the monitor is also almost entirely made of black matte plastic. To the rear there is a large projecting square block shape. Inside Meno hiding all the electronics and power supply: 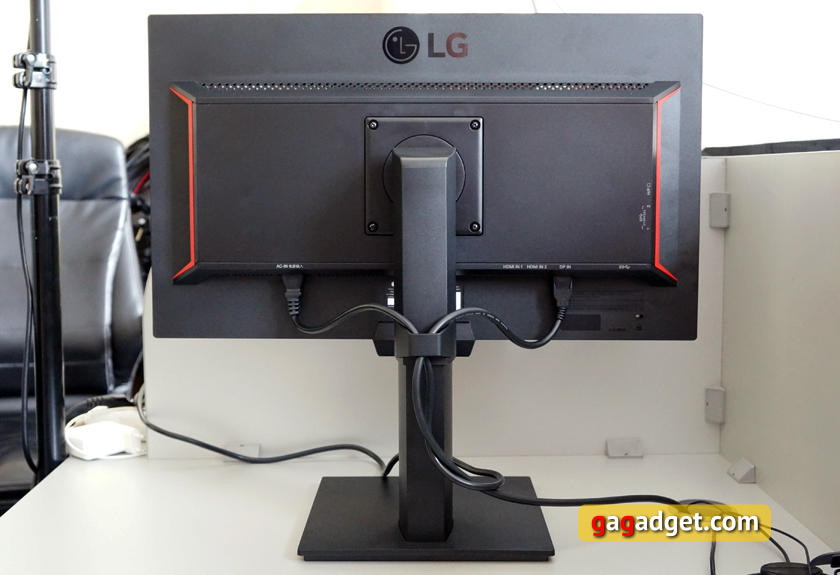 The only thing that in appearance hints at gaming focus is a red lattice on the sides of the rear of the unit. They are perforated for cooling of the insides of the monitor: 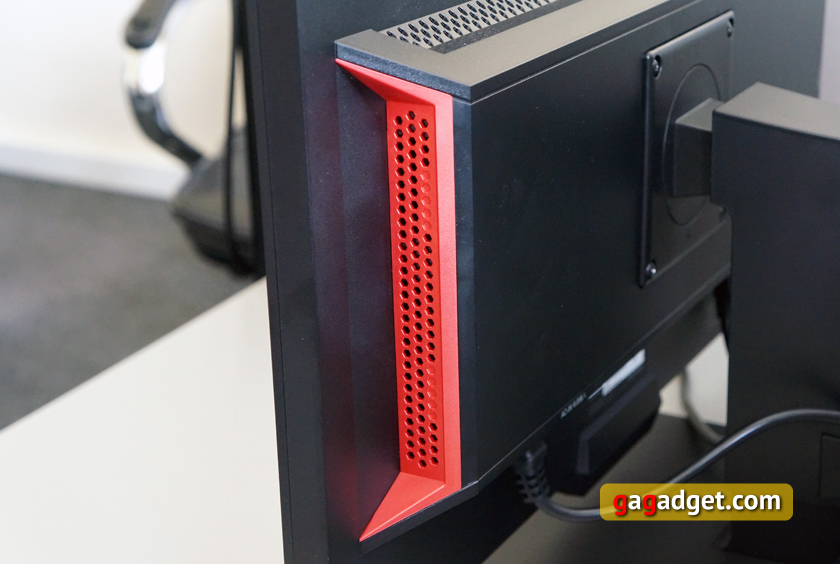 On the right side hosts two USB 3.0 port and headphone Jack: 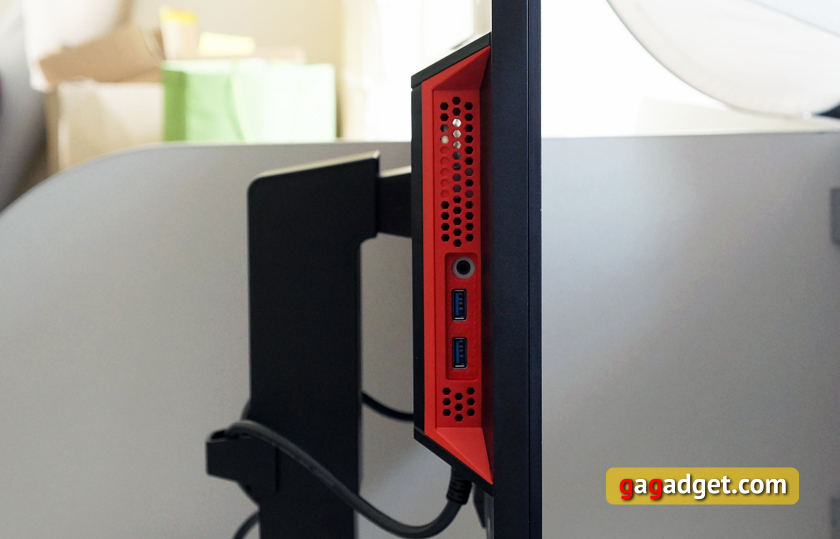 In the bottom part houses the connectors for input and USB 3.0 Type B to connect the USB hub: 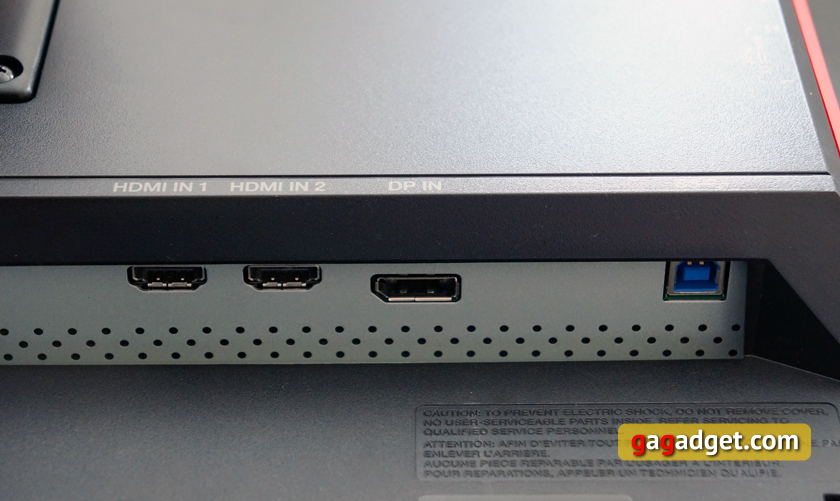 Monitor collected qualitatively, and made of practical materials. Despite its gaming orientation, looks very tidy and peaceful.

What about ease of use, adjustable and connectors? 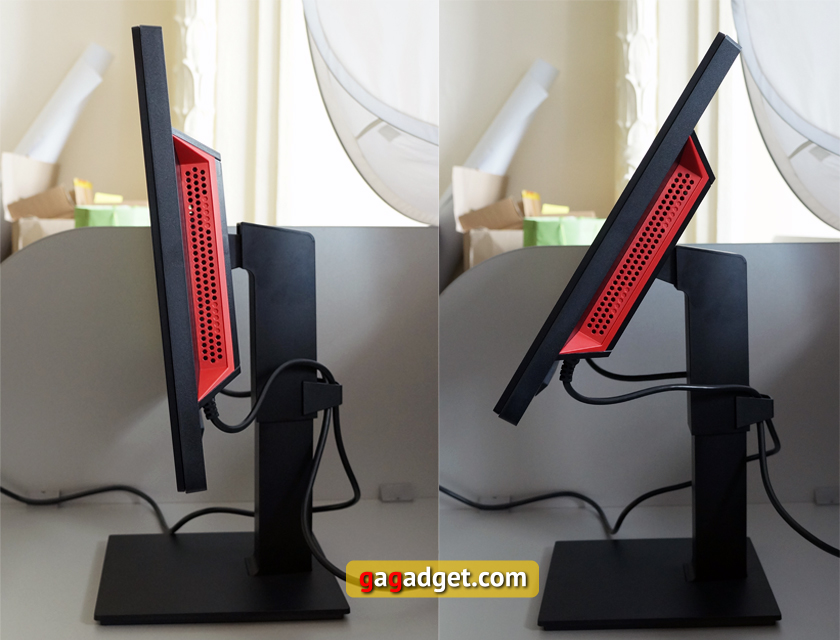 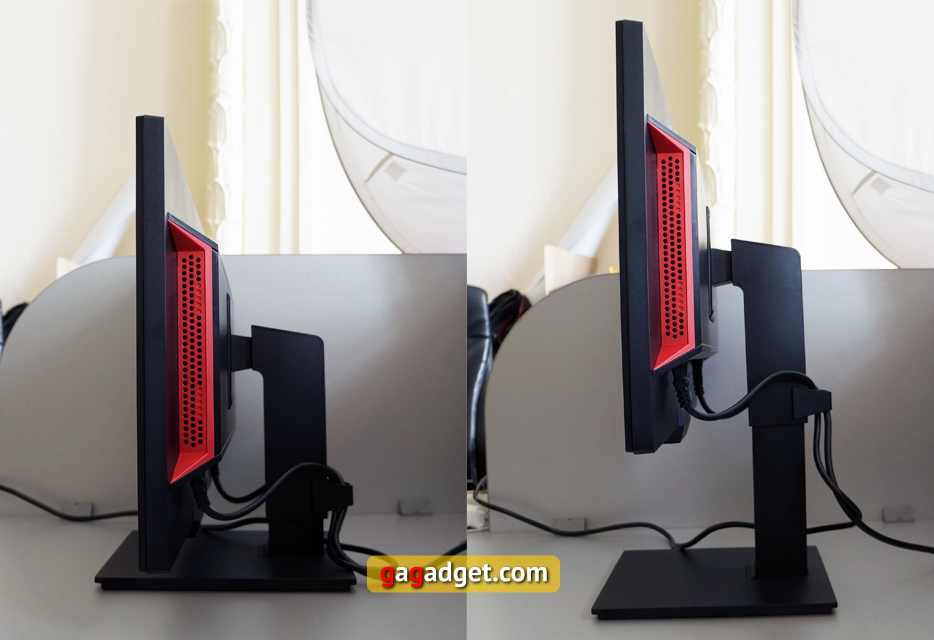 When used for business purposes may appreciate the ability to rotate 90° in portrait mode: 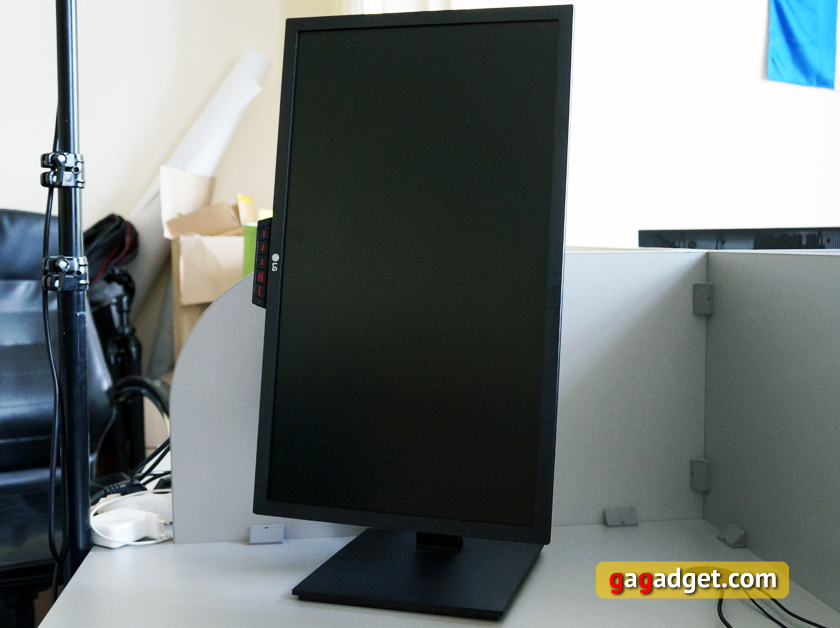 As for ports, the monitor is equipped with everything necessary: there are two HDMI ports version 2.0, one DisplayPort version 1.2, headphone Jack and USB hub with two ports USB 3.0: 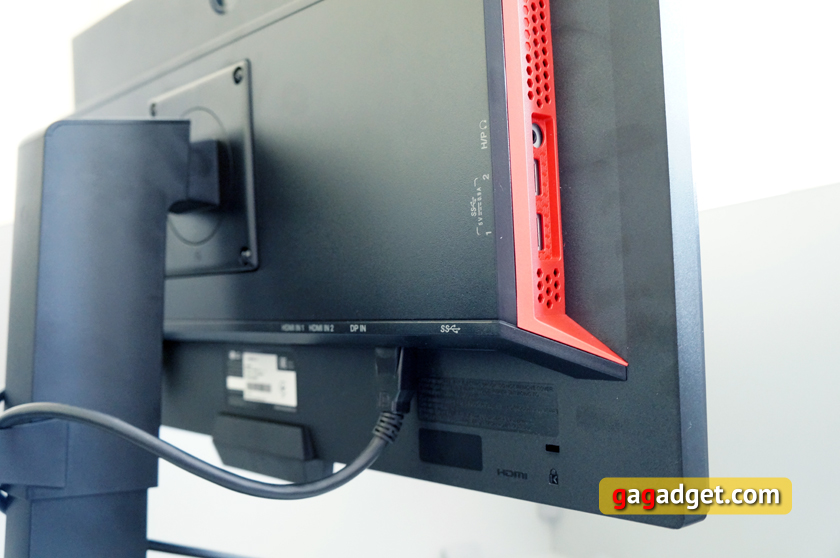 Provides a removable clip for cables in order to neatly organize all communications: 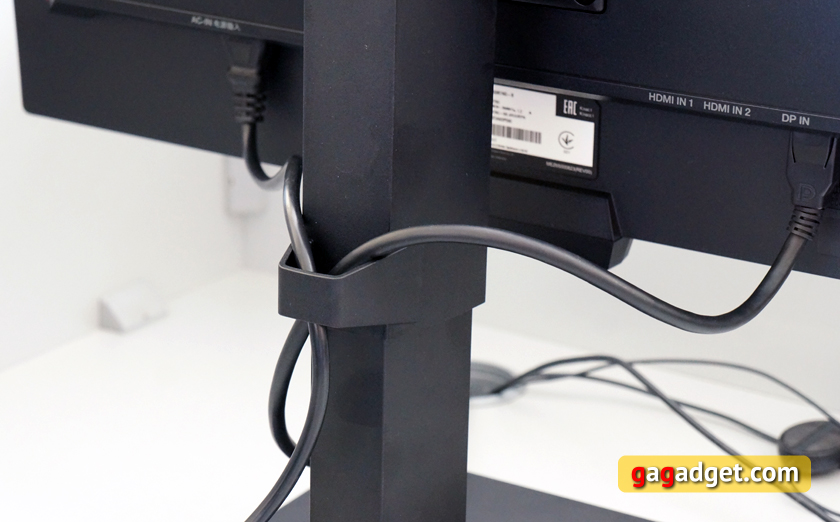 As for the menu and the organization of the settings, all is made similarly to the more expensive LG 27UD88 and 34UC79G that we had surveys. About quick buttons to switch modes we have mentioned above, everything else is configured using the joystick and on-screen menu. When you first click on the joystick (he is also the power button) onscreen quick settings menu the Quick Circle, which allows you to switch to game mode, select the source, turn off the monitor and go to the advanced settings menu. In the settings of game mode, you can select one of the predefined presets (there are two presets for first person shooters, one for strategies and one fully customizable), adjust stabilizer black, to enable FreeSync, 1 ms Motion Blur Reduction, to configure additional scope (the Crosshair function), Super Resolution+, and response time. In the advanced menu there are additional modes of images including Nightclubs, photos, videos, and custom settings:

Also supported by proprietary tool OnScreen Control is A duplicate setup on-screen menu: brightness, contrast, image modes, include FreeSync, plus you can configure presets to be automatically activated when you run certain applications to scale the text sizes and different variants of split screen (Split Screen):

And how at it with quality of pictures?

We all know the advantages and disadvantages of TN-matrices, but they are of varying quality. We have to admit that LG 24GM79G installed a really high quality TN-matrix, the horizontal viewing angles are good, although the specifics of the type of the matrix will not run away and the image just fade away yellowish shades: 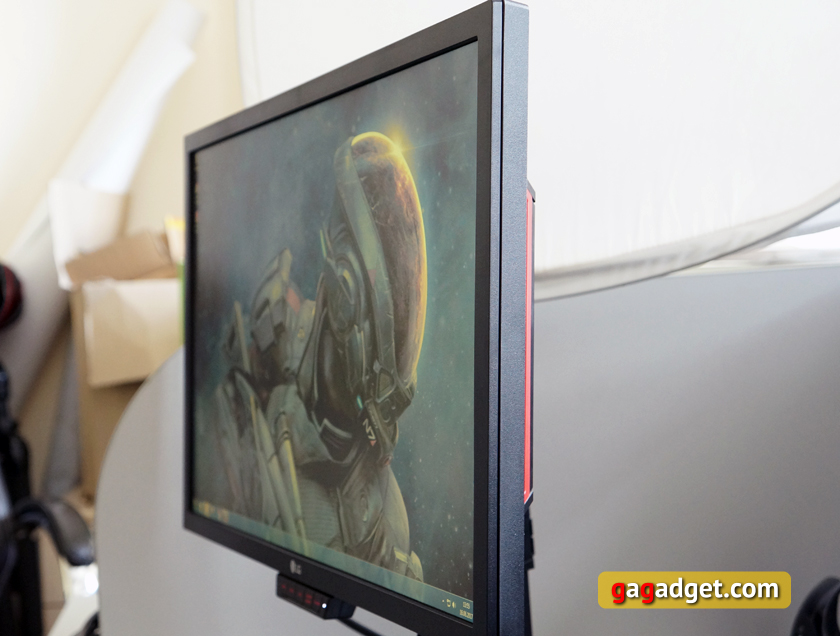 With a vertical case, of course, worse, the colors are inverted:

We measured the performance of brightness and colour reproduction of the monitor in different modes. In user mode showed the maximum brightness even more of the stated: 368.337 CD/m2, minimum — 0.915 CD/m2, and the index contrast is low (again, the specifics of TN-matrices as such) 403:1. The diagrams show that the gamma curve is not the same as from the benchmark so that distortions can not be avoided. Factory calibration is very pleased, red, blue and green components are very close to the standard, the color temperature varies from the reference 6500K to 7000K, and the error ΔE does not exceed the figure 4. The CIE-diagram shows that the color gamut is very close to standard sRGB:

In photo mode maximum brightness significantly lower 288.269 CD/m2, minimum — 0.924 CD/m2, and the rate of contrast — 312:1. Overall, the graphics are similar, but the gamma curve is not so radically different from the standard:

The disadvantages of the TN-matrix can not escape, for obvious technical reasons. But in its category matrix is really very sensible. Wide (by the standards of TN) viewing angles, especially horizontal and very good color rendition

See also  The list of Xiaomi smartphones that will upgrade to Android OS 7.0 Nougat

What are some game features and how the monitor shows itself in games? 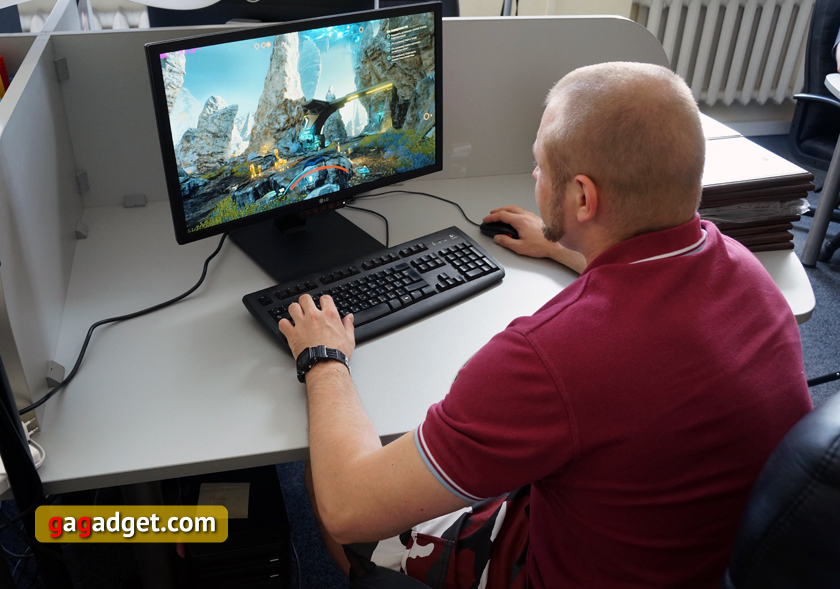 Monitor Packed with a bunch of extra games (not only playing) functions, which is to say a few words. Most of them we have already seen in LG 34UC79G, but for those who do not want to go into another review, remember what it was about. First matrix is used with a frame rate of 144 Hz, plus supports synchronizing the frame rate of AMD FreeSync to work with the Radeon. Feature allows you to eliminate the discontinuities of frames and hangs. What’s sad (to me, as the owner of the GeForce GTX1070), similar to the technology G-Sync for GeForce found in monitors much less frequently, however, their price tag is significantly higher than that of monitors with AMD FreeSync. 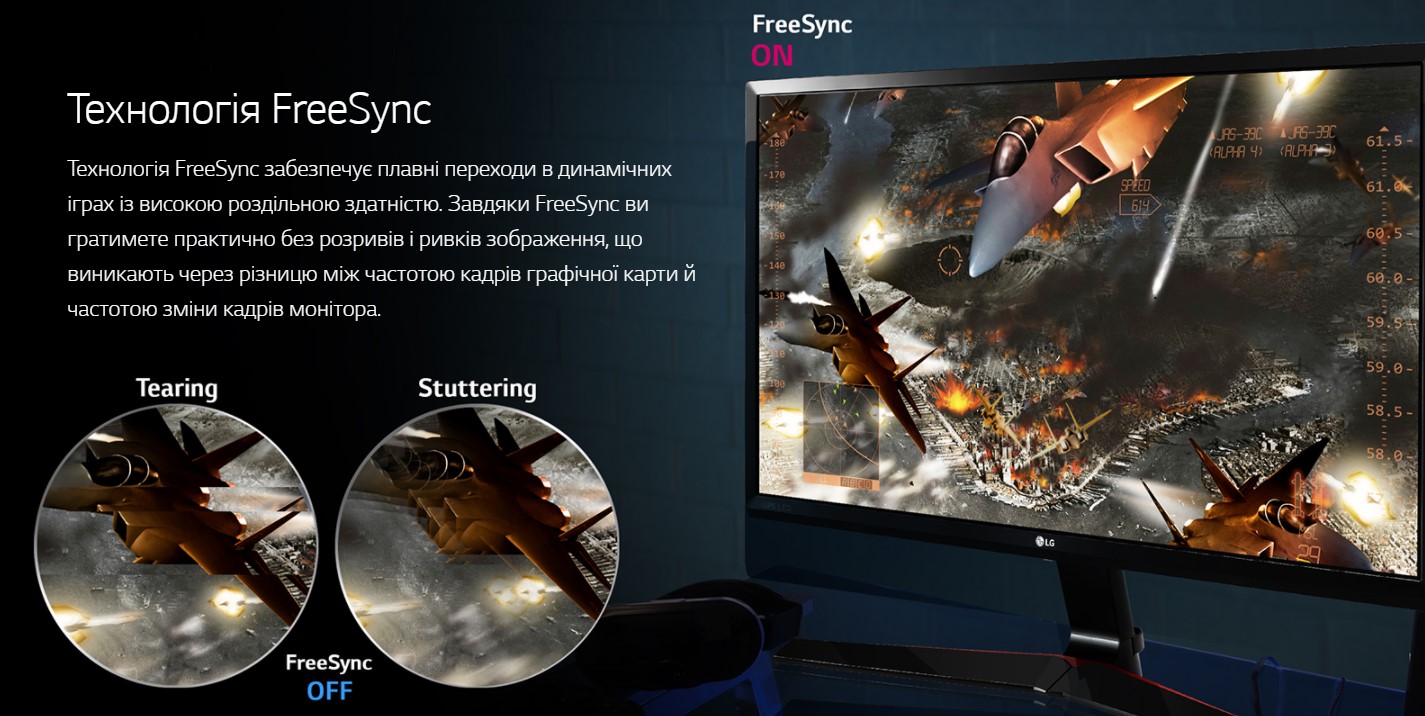 LG focuses on the function of the Motion Blur Reduction, when enabled, where the response time is 1 MS, the website clearly shows how it works. In fact, one inserts a black frame (short-term off the backlight), so removed the blur of the object. The function does not work simultaneously with AMD FreeSync and Dynamic Action Sync: 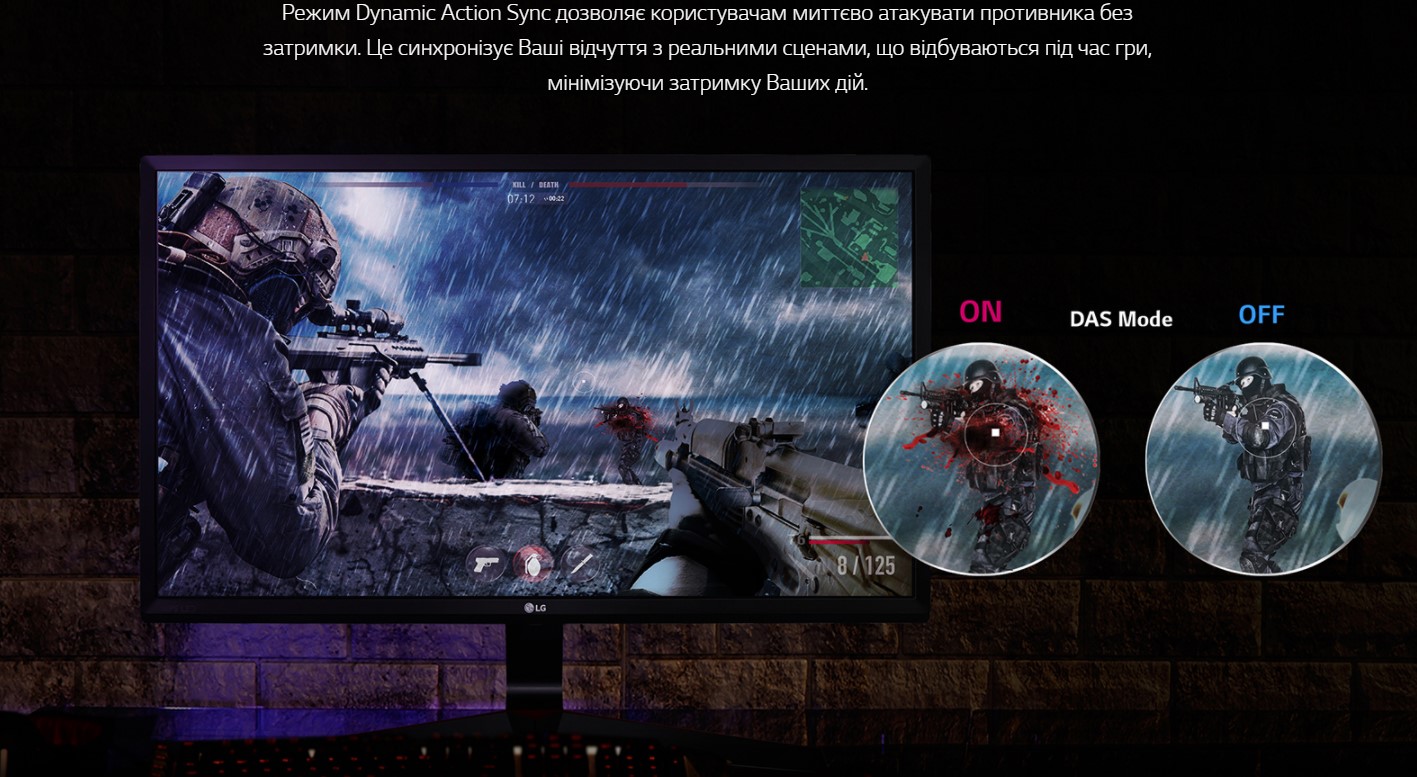 And the stabilizer in black color (Black Stabilizer), which makes the darkest areas of the picture lighter, which allows not to pass the enemy in a dark alley: 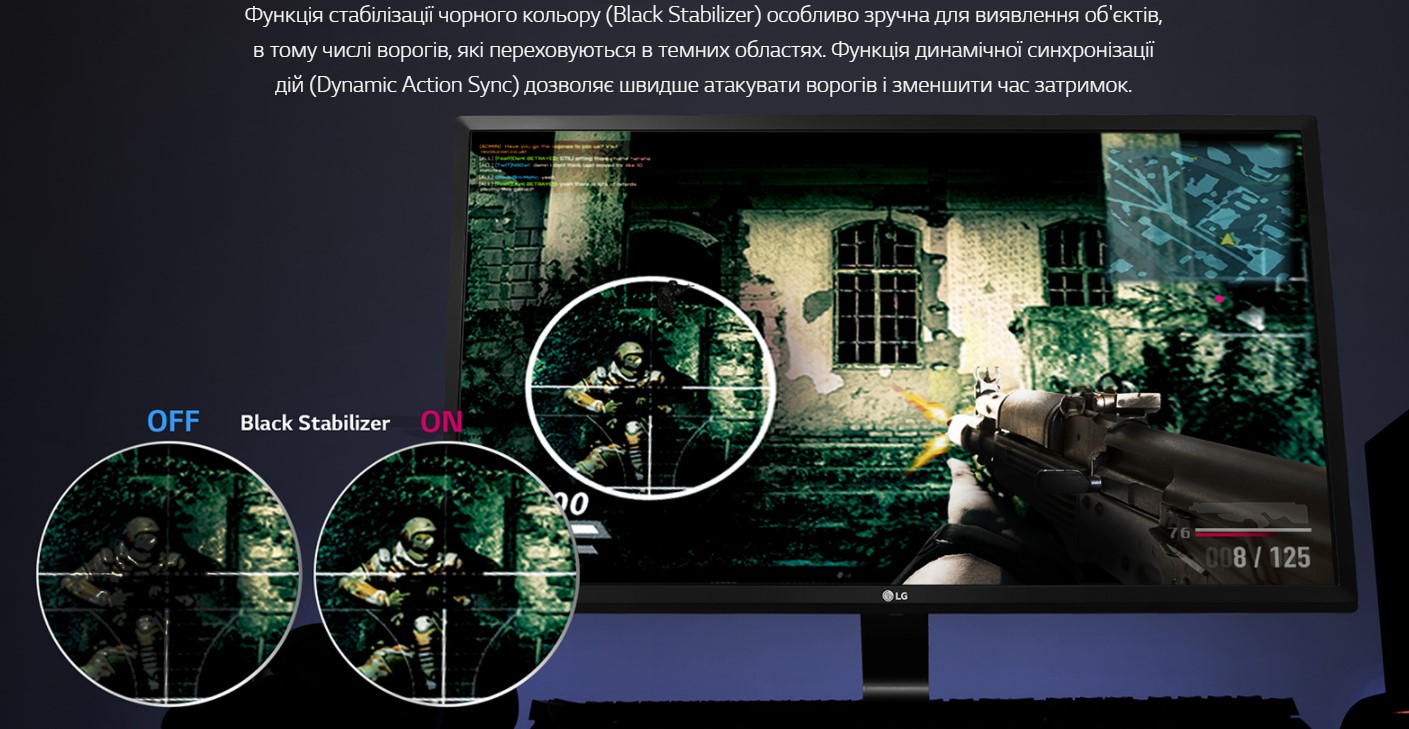 In addition, in the settings you can add display additional large scope, so it was easier to aim at the enemy (the Crosshair function) and you can activate a Super Resolution+, pack-a-punch that enhances detail and edge sharpness of the picture. Well, Yes, and enough, perhaps, to the theory and proprietary technologies. More important still, to evaluate the monitor in the case. I drove LG 24GM79G in the first place, shooters:CS: GO, Star Wars: Battlefront, Battlefield, DOOM plus shooter and RPG Mass Effect: Andromeda, The Division, GTAV, Watch Dogs, For Honor, Deus Ex: Mankind Divided, Dark Souls 3 and strategies for XCOM 2 and StarCraft II. The matrix is really very smart and with proper hardware the picture is very smooth and crisp. Support AMD FreeSync does not mean that the monitor is bad work GeForce my monitor perfectly GTX1070 friends. Each person has their own opportunities of view and really see an obvious difference except that between 30 and 60 frames per second, more — difficult. It would seem, why 144 Hz? The caveat is that monitors are not perfect and the same applied to the matrix signal of 60 Hz should not be equated with FPS and smoothness of the picture. A pixel is the time that it takes the desired color, resulting in dynamic scenes obtained footage of artifacts and trails. Modern gaming monitors with fast matrixes sharpened to maximum speed “tanning” of the pixel in the desired color, which reduces the blur effect and loops. As a result, the eye of 144 Hz and a response time of 1 MS is really doing a dynamic picture more clear. Subjectively, to play on LG 24GM79G really comfortable. As for the additional chips, lightening dark areas (Black Stabilizer) is useful in shooters on dark maps where there are secluded places where the enemy could hide. Function overlay crosshair CrossHair can be useful in cases where the “native” sight there. For example, in Battlefield “hardcore” (and removed the sight and the map and number of rounds), PayDay 2 or Metro at high levels of complexity.

LG 24GM79G is an interesting monitor for the most hardcore gamers who want to get the fastest matrix with a minimum response time of the matrix for reasonable money. Judging by the offers in online stores, at this point, it is very nearly the most affordable monitor with a frequency of 144 Hz, a minimum response time of 1 MS and time synchronization support AMD FreeSync. Yes, miracles do not happen and the monitor installed, though very high quality, but TN-matrix with all the consequences. The monitor is very practical from the point of view of materials and designs, there are plenty of opportunities for adjustment. Plus has all the modern connections, hub with USB 3.0 and headphone Jack. 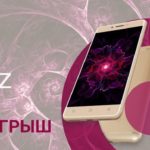 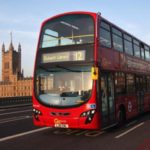