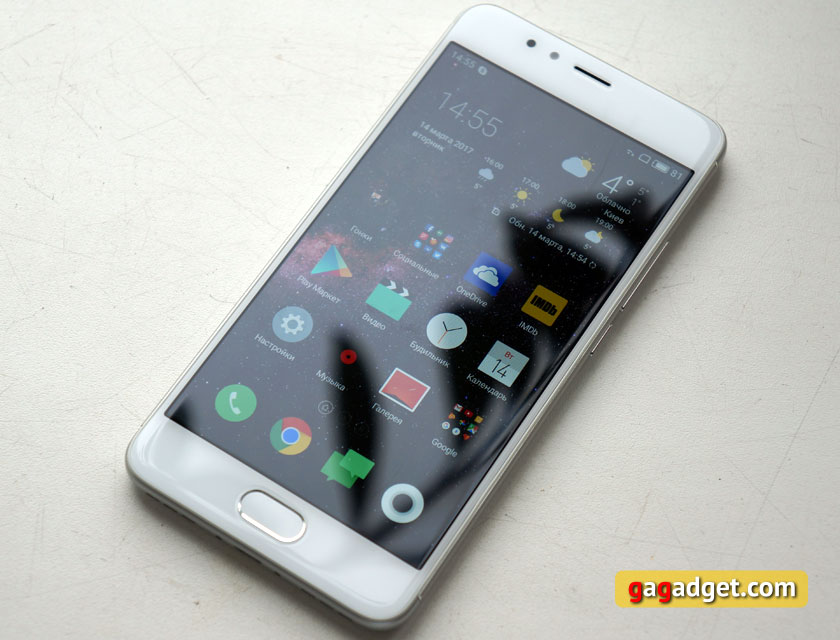 In the summer of last year, Meizu has released a budget smartphone M3s, which was very popular because of good performance, compact metal chassis and a tempting price tag. It is logical to wait for continuation. First, the company has released a plastic state Meizu M5, and recently was announced metal M5s. The company decided not to invent something radically new smartphone looks like a smaller version of the 5.5-inch Meizu Note M5 with more modest performance.

In the current lineup of state employees, the company decided to slightly increase the screen diagonal is now 5.2 inches, the resolution remains the same: 1280×720. A thumbprint scanner is still under the screen, the body remained metal, but the shape has changed slightly compared to the Meizu M3s. The RAM is now 3GB, even in the basic model, but, as strange as it seemed, the processor in the new budget are more modest. Meizu M5s installed cosmedent MediaTek MT6753 (instead of the MediaTek MT6750), more details we at this moment stay in the appropriate section. The main camera in the smartphone is of 13 megapixels with phase detect autofocus and dual led flash. The battery has a capacity of 3000 mAh, supported with quick charge.

The front panel of the smartphone looks exactly the same as any other current smartphone Meizu and there’s nothing wrong there. The front panel is covered protected by glass with rounded edges 2.5 d Type of glass not specified, most likely DragonTrail. Frame on the sides is relatively small (especially considering belonging to the available solutions): 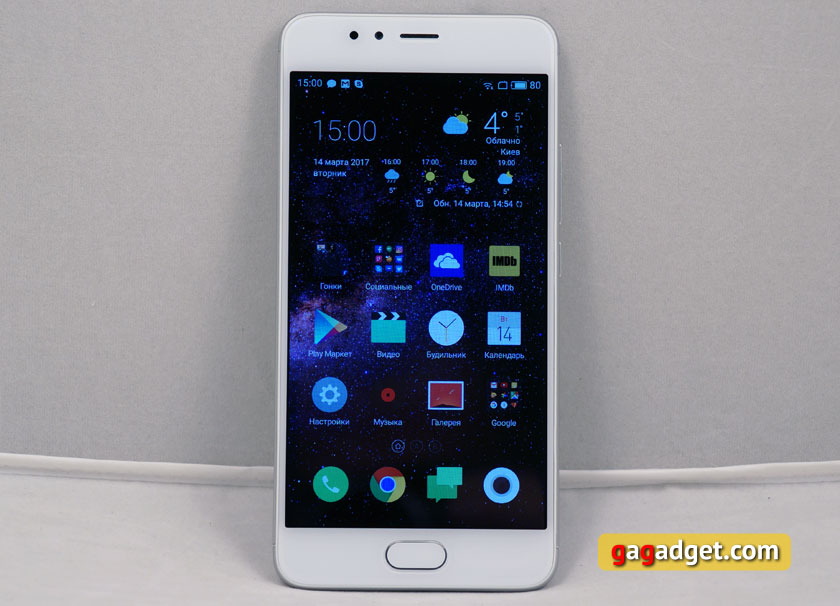 Under the screen is traditional for Meizu mTouch mechanical button with a metal frame. It is slightly recessed. Its functionality is familiar: in addition to the fingerprint scanner, it is responsible for the backward one level at the touch and returns to the home screen when pressed: 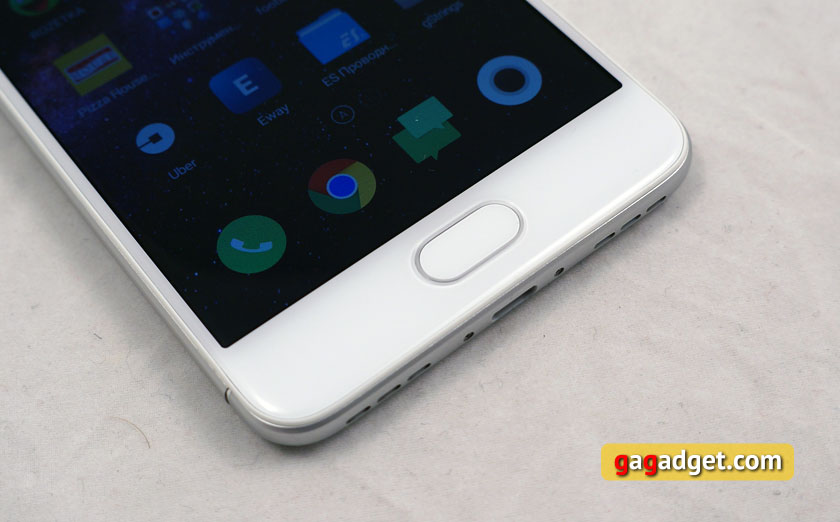 Above the screen is the earpiece mesh, front camera, light sensor, proximity sensor and led notification light. The location has changed slightly compared to the M3s, although the work is not in any way affected by: 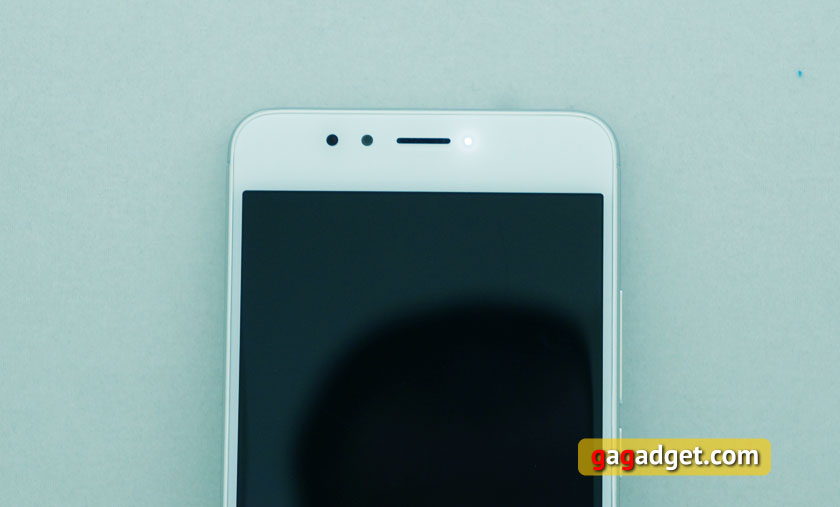 Differences from the predecessor are already visible looking at the edge of the smartphone. By itself, the hull shape became less rounded, appeared more pronounced corners. On the bottom all the same set: MicroUSB, on the sides of which two symmetrical screw and the oblong holes three on each side. As you can guess, underneath them placed external speaker and the microphone. The upper and lower ends are still made of painted plastic for normal operation of the antennas:

On the left side — a tray for SIM-card and MicroSD:

Tray hybrid, you can install either two SIM-card format nano, or one plus a MicroSD: 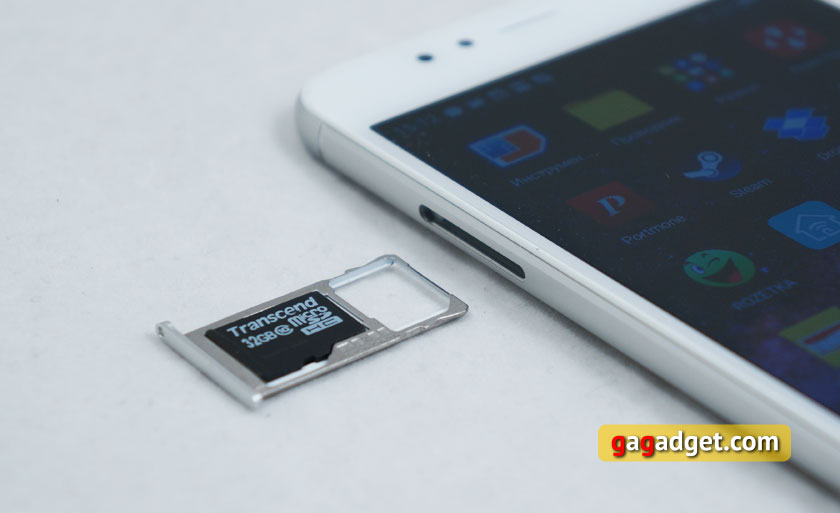 Standard headphone Jack is placed on top of the smartphone:

The paired volume buttons and power button — on the right side. They are housed in small shared deepening, as well as all the latest models of Meizu:

Almost the entire heel is made of metal, logo, camera and dual-led flash placed in the usual company. Top and bottom plastic inserts. They are painted in close to the body color, but the minimum difference is still visible: 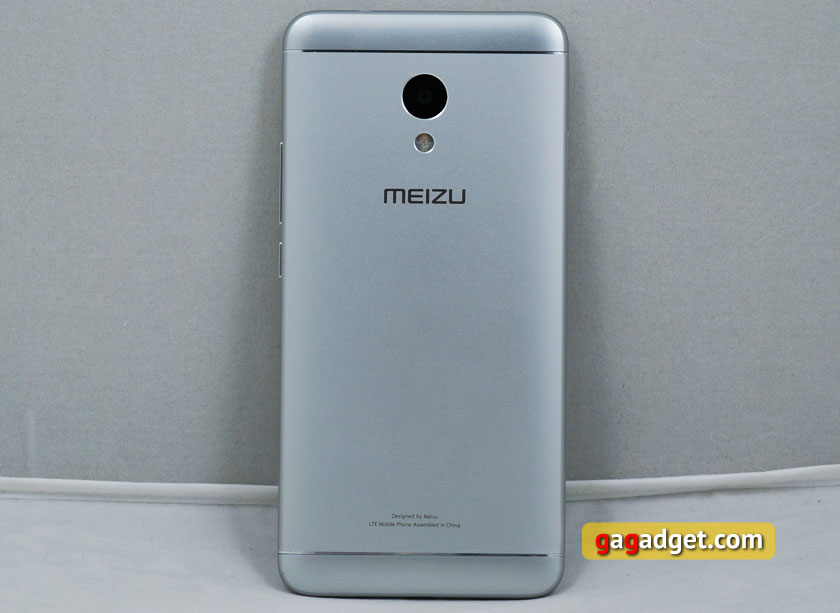 In top models plastic inserts implemented thin trim strips between the metal ends and the main part of the body. In the budget models (and Meizu M5s in particular) remains between the plastic and the metal there is a small but noticeable deepening: 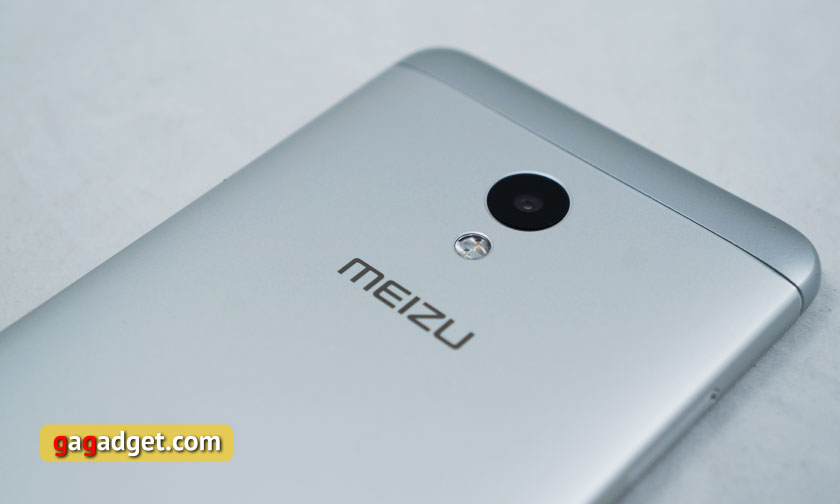 Some radical innovations not, but it seems that the company is gradually trying to improve ergonomics. On personal impressions, the Meizu M5s better in the hand than the M3s. The length of M5s significantly more, the width is only 2.6 mm.

The screen size increased to 5.2 inches, the resolution remained the same: 1280×720, accordingly, the pixel density was a little less: 282 ppi. My sad vision is to see the individual pixels has failed. Used IPS-matrix technology GFF full lamination without air gap. The other declared characteristics similar Meizu M3s: the maximum brightness of 380 CD/m2 and a contrast of 1000:1. There is the oleophobic coating, if it’s better than its predecessor. Some final conclusions difficult to do: on the review I had engineering samples. M3s — early without any markings on the case and the screen is slightly “Zeleni”, which is not in the samples M5s. The screen material claims “the eye,” no, the colors, the reserve of brightness and viewing angles at a good level, especially considering affiliation to the budget segment, a deeper look using a colorimeter: 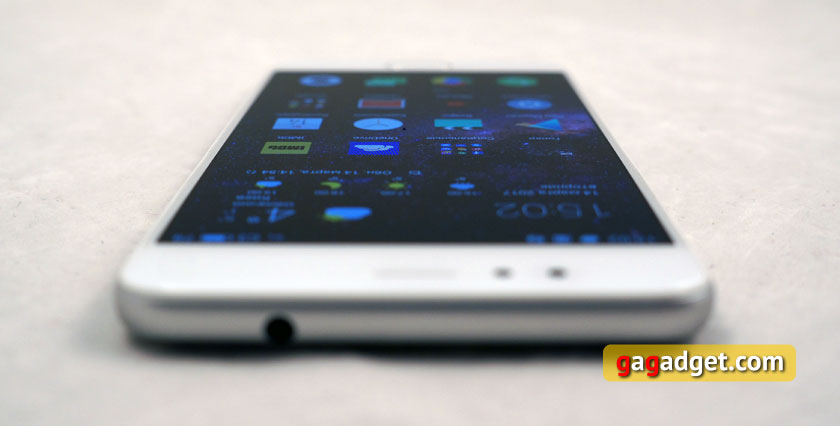 Maximum brightness is sufficient to ensure that the information remains readable in the bright summer sun, this is no problem. 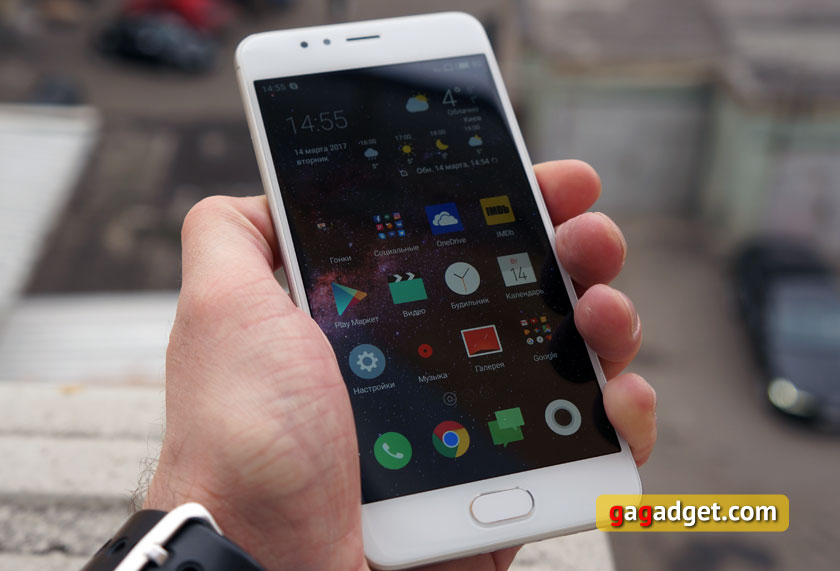 The results of measurements with a colorimeter showed that the real features of the smartphone screen is almost consistent with the stated maximum brightness: 384.419 CD/m2, brightness of the black field 0.413 CD/m2, contrast ratio of 931:1. Indicators better than its predecessor (especially contrast). Calibrated screen is not the best way, just to correct you utility: 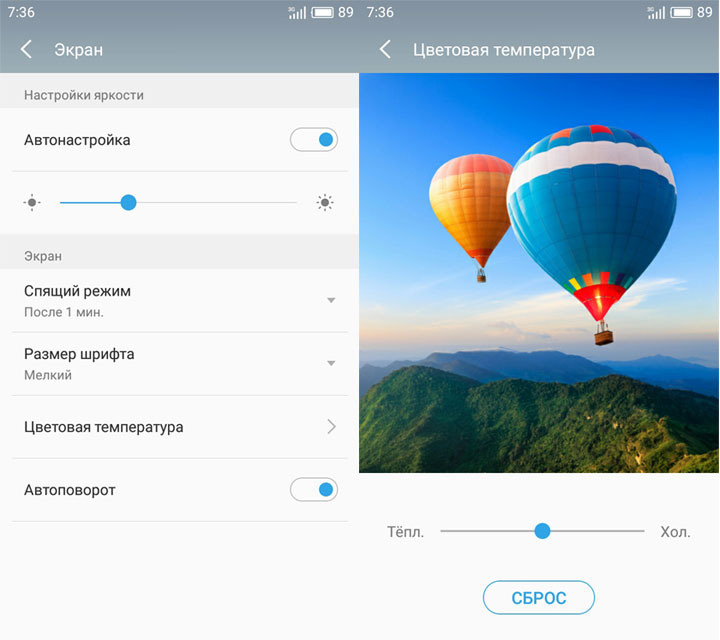 As you can see in the below graph, there is a significant overabundance of blue and the commensurate lack of red, the picture cold. Heat temperature is about 9450K in the standard 6500K:

Meizu is sometimes quite strange about the selection of “hardware” with the release of new smartphones. Meizu M2 Note was set weaker processor than the M1 Note. History repeats itself and Meizu MediaTek MT6753 M5s installed at 1.3 GHz, which (despite the greater number) has a more modest performance than MediaTek MT6750 in plastic M3s and M5. In this case it is not fatal, but very strange. There is a suspicion that the company was trying to reduce the cost of production or reduce the consumption of your smartphone (or both). In any case, with the resolution of the screen, the shell works smoothly and the smartphone is “pulled” GTA: Vice City, MKX and NFS: No Limits:

The same standard for Flyme operation modes power Saving, Balanced and Productive (in the new version of Flyme 6 is arranged slightly differently): 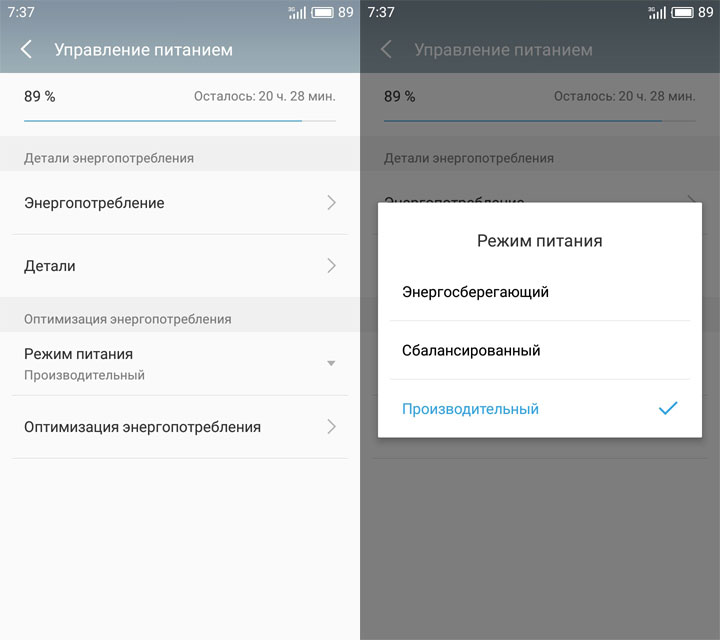 The smartphone is available in variants with 16 or 32 GB of internal memory, operative in any case 3 GB instead of one of the SIM card install the MicroSD. Immediately upon selection should take into account the fact that the shell Flyme 5 does not support move apps to the card of the regular methods (for the 4th this possibility was 6th while in my hands was not, I can’t say anything about it), so if apps and games will be a lot, it’s worth taking the option of 32 GB.

Back to the innards of the smartphone. The GPS module works without problems, satellites catches quickly: 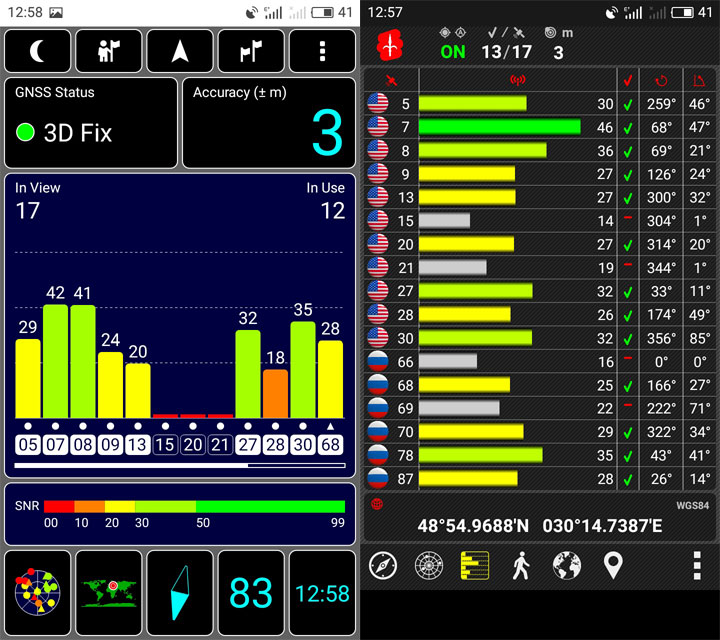 The smartphone has dual-band Wi-Fi 802.11 a/b/g/n and Bluetooth 4.0, NFC and infrared are missing. Sound quality and dynamics and headphones to say nothing special, all average, no worse and no better than competitors in its class. The battery is not removable, its capacity is 3000 mAh. The smartphone supports 18-watt quick charging mCharge, allowing (according to the manufacturer) charge the battery at 3000 mAh to 56% in just 30 minutes, a very nice bonus for state employees. In practice, this test has failed: we had the smartphone without the kit. As for battery life, in a moderate mode, the phone lives a day and a half. If squeeze the full, until late evening, so staying with a dead smartphone away from an outlet will be difficult. The video turns a little more than 10 hours.

I already wrote above, M3s and M5 are working on MT6750 MediaTek with eight cores in two clusters: 4хARM Cortex-A53 at 1.5 GHz and 4хARM Cortex-A53 1.0 GHz and graphics ARM Mali-T860. In the new Meizu MediaTek MT6753 M5s installed with the same configuration of the nuclei, but decreased to 1.3 GHz maximum clock speed and a more modest graphics accelerator Mali-T720 GPU, so the performance in games and synthetic benchmarks will be lower than its predecessor. RAM — 3GB LPDDR3 uses. We have to review was the test sample with Daily-firmware which does not allow regular methods to set most of the benchmarks so thoroughly evaluate the performance failed:

What firmware and UI?

Test pattern runs on the Android 6.0 Marshmallow with shell Flyme, daily version 5.6.11.7 with the limits for setting benchmarks. With the start of sales is likely to already be available Flyme 6 (which already appears on the promotional materials of the smartphone). In General terms, remember that can 5th version of Flyme, a detailed understanding of it will make sense with the release of Flyme 6. 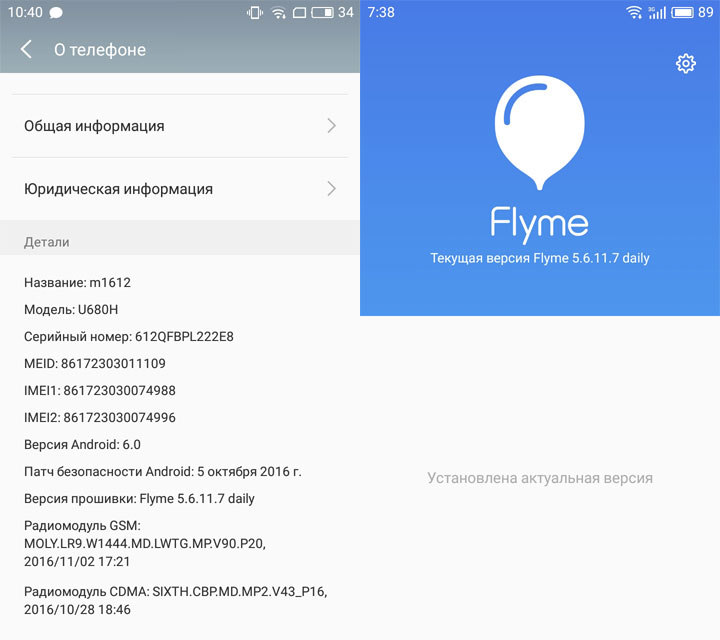 Desktops with folders, shortcuts and widgets, and a separate app menu is still there: 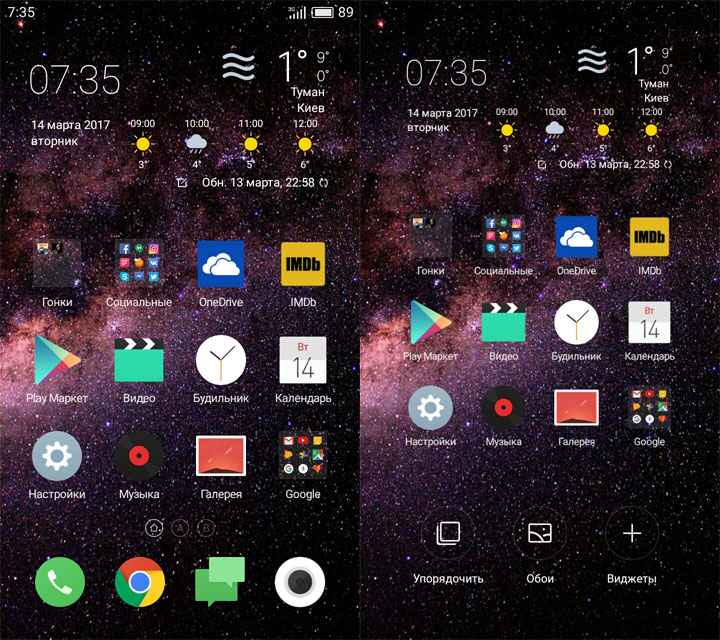 The upper shutter, the switches can be dragged to the desired location after a long press: 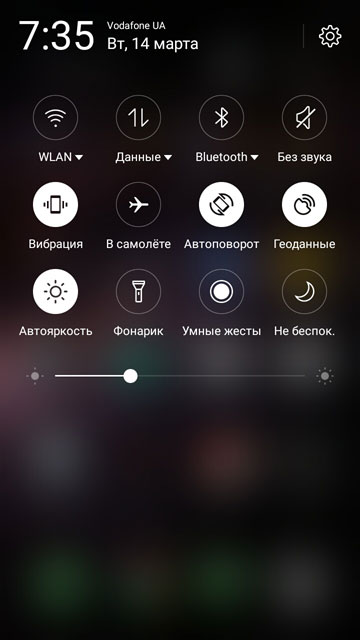 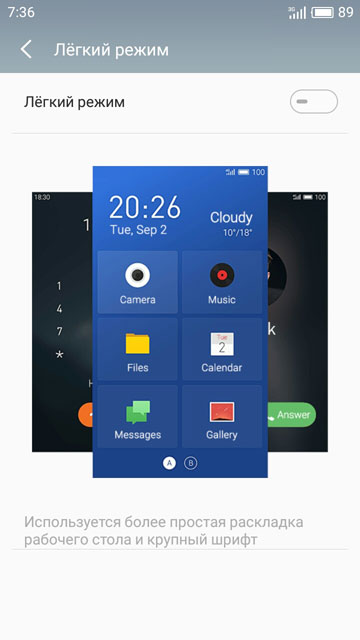 Security options and a fingerprint scanner. Traditionally up to 5 prints. The scanner works quickly, from any angle: 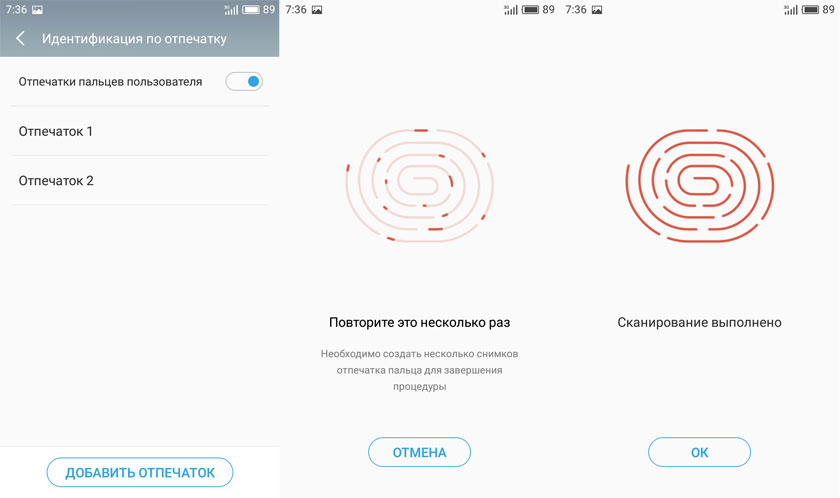 Fast Wake up and launch apps with gestures: 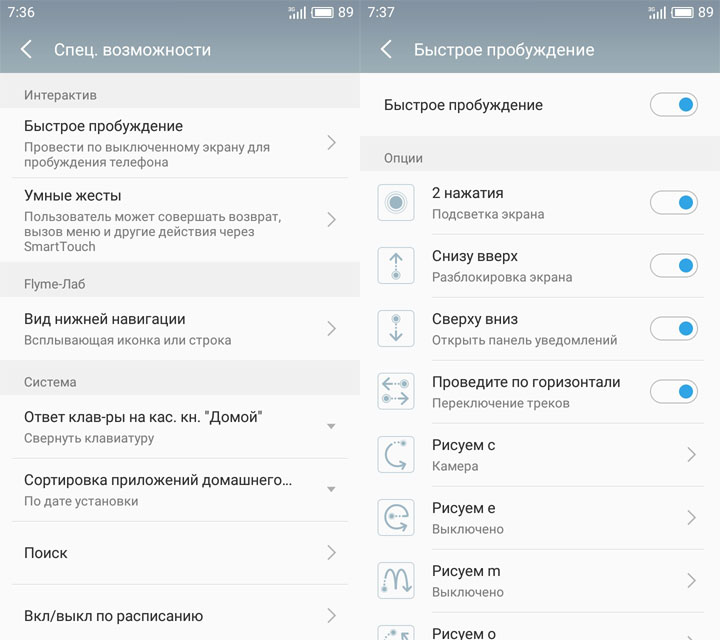 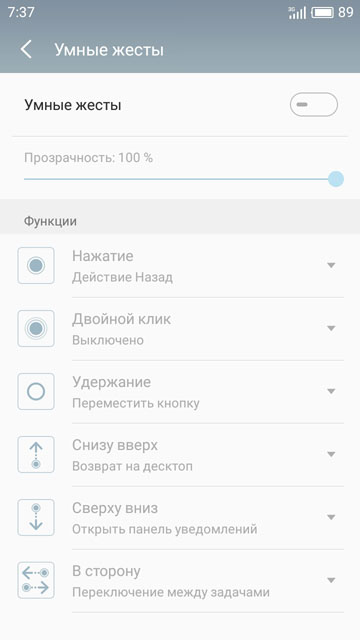 The ability to customize the bottom navigation bar. In the 6th version of Flyme much more options, for different applications: 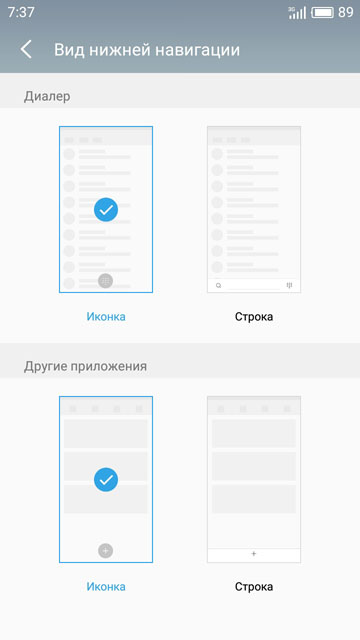 A pack of screenshots:

How are things going with the camera?

The main and front camera technical characteristics have remained unchanged. The main camera has a resolution of 13 MP, phase detection autofocus, five-element optics with f/2.2 aperture and dual-LED flash. Front camera: 5 MP, f/2.0. The interface is the same, it remains unchanged for a year and a half since the release of the fifth version of the shell. He significantly modified in the 6th (in particular HDR rendered on the main screen):

In good light the pictures get a very decent quality. In the dark — with difficulty, but it is worth remembering that we are in the hands of the public sector:

Last year, Meizu M3s became very popular because of the extremely tempting balance of price and performance. There is a suspicion that the current Meizu M5s can repeat his success. The background to this is: the body is made of metal, while they became more comfortable the screen (subjective impressions) was of a better quality battery and battery life is very good, for this class of devices, and added a very useful bonus in the form of support for fast charging. Of course, Meizu made some compromises in order to preserve the affordable price tag. In the first place as a budget chipset, which performance (the graphics primarily) more modest than its predecessor and expected a mediocre camera. The smartphone is about to appear on sale, the price tags will be 3900 UAH for the 16 GB and 4400 UAH for the 32GB, so competition for him will be is that compatriots. And brands have nothing to oppose.

5 reasons to buy the Meizu M5s:

2 reasons not to buy Meizu M5s:

Eye was the first iPhone case with built-in Android smartphone
Comma.ai will be giving out the equipment for autopilots for free in exchange for data 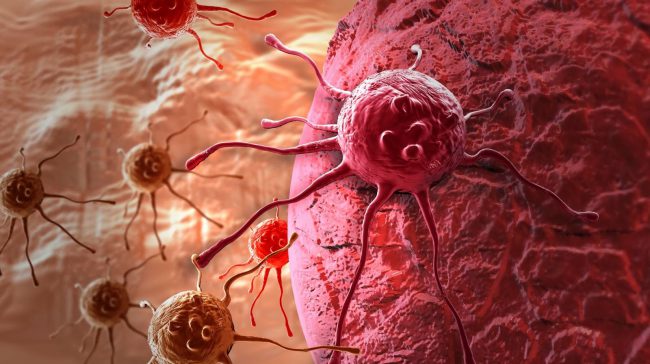 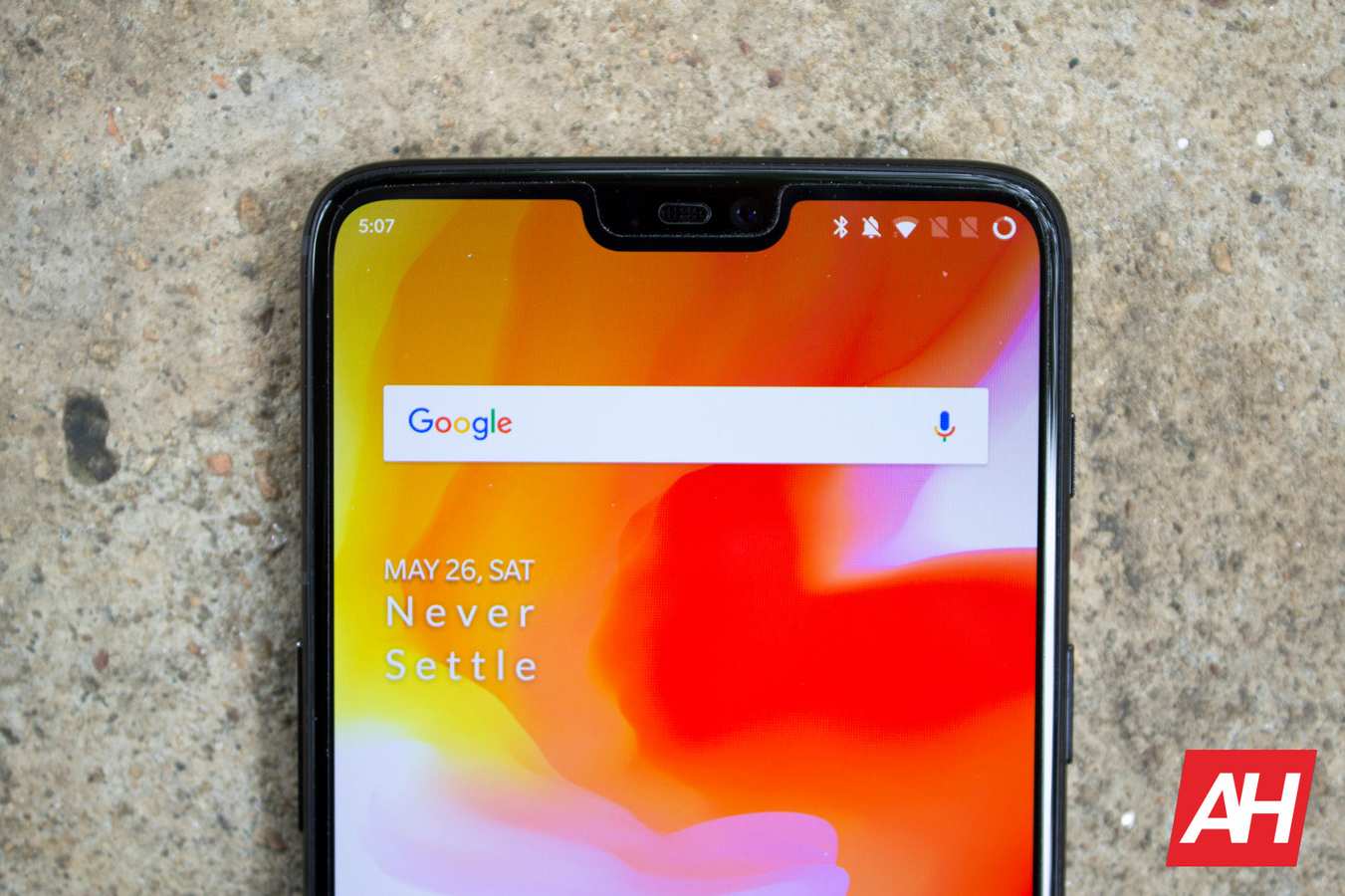 Don’t Expect The OnePlus 7 To Come With Wireless Charging. It Won’t 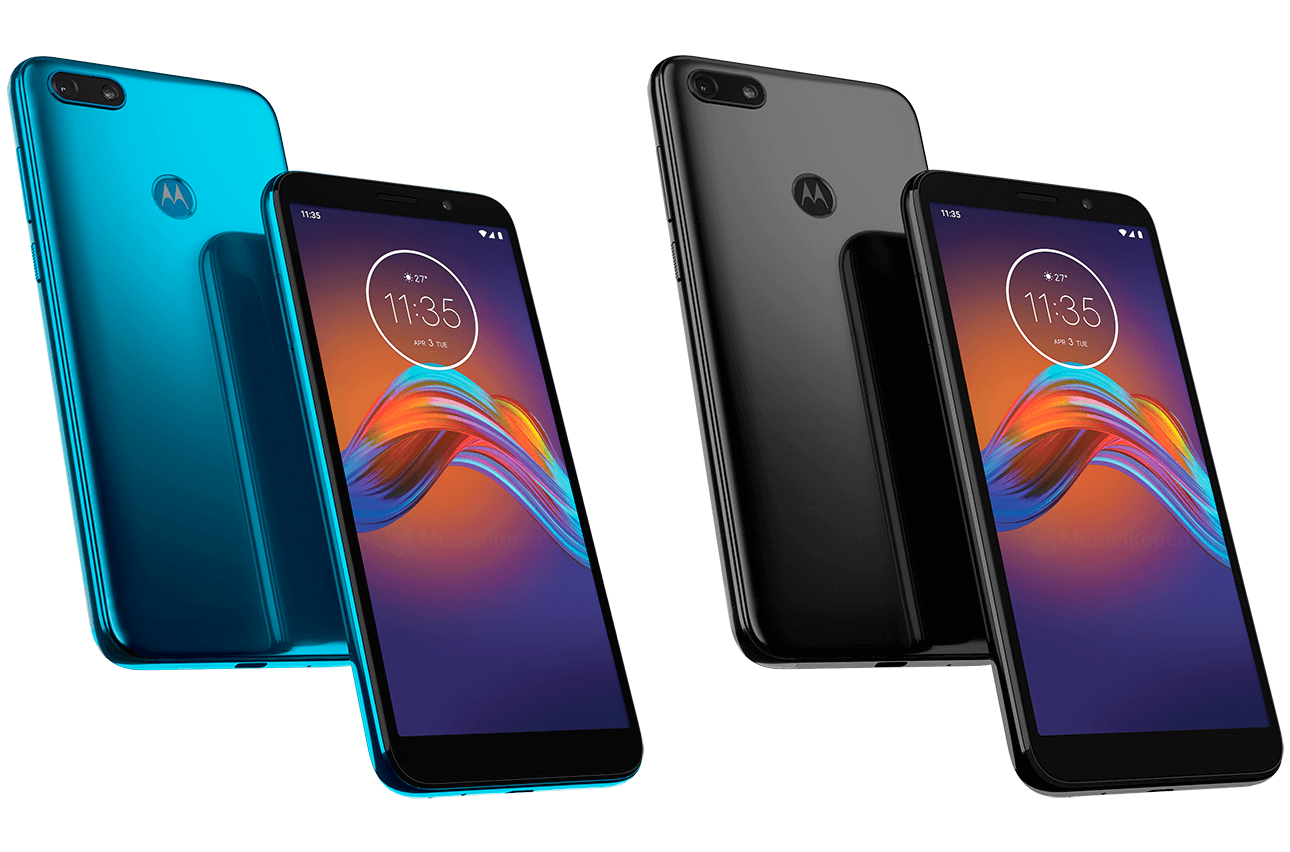