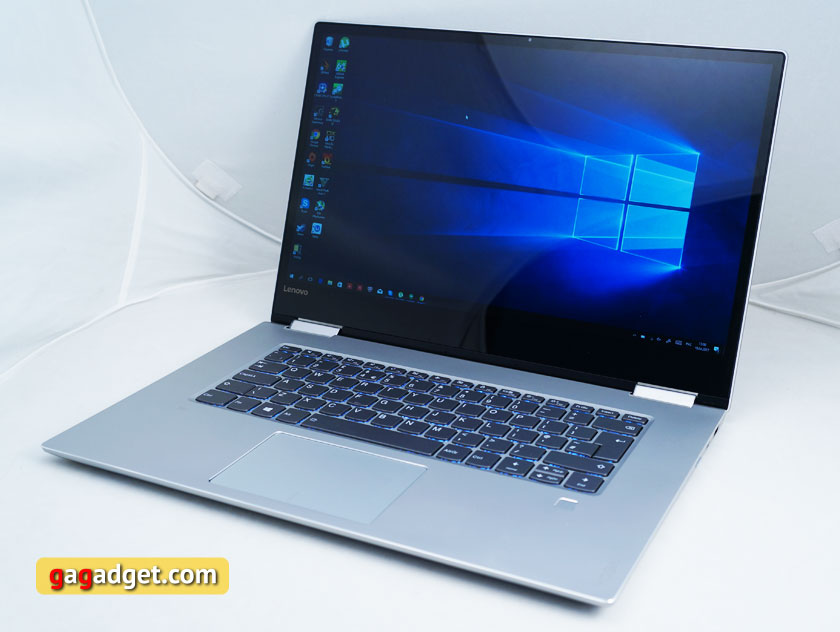 What associations with the phrase “convertible notebook”? Something compact, lightweight, 360° rotatable touchscreen and a modest filling, which is suitable for office work, but certainly not serious loads. Despite this, there are exceptions. Lenovo continues to experiment with large-scale transformers and one of them — Lenovo YOGA 720-15 with a large 15.6-inch and discrete graphics.

What’s in the box? 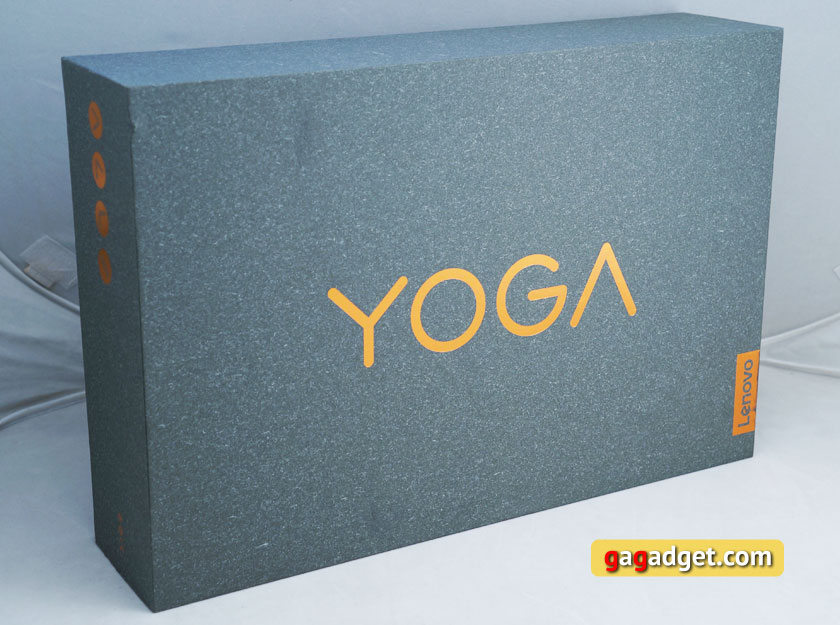 The laptop comes in a box of gray cardboard with a large gold-tone logo YOGA. The package is minimal. In fact, the laptop, power cable and power supply. Dimensions in comparison with PD from MacBook: 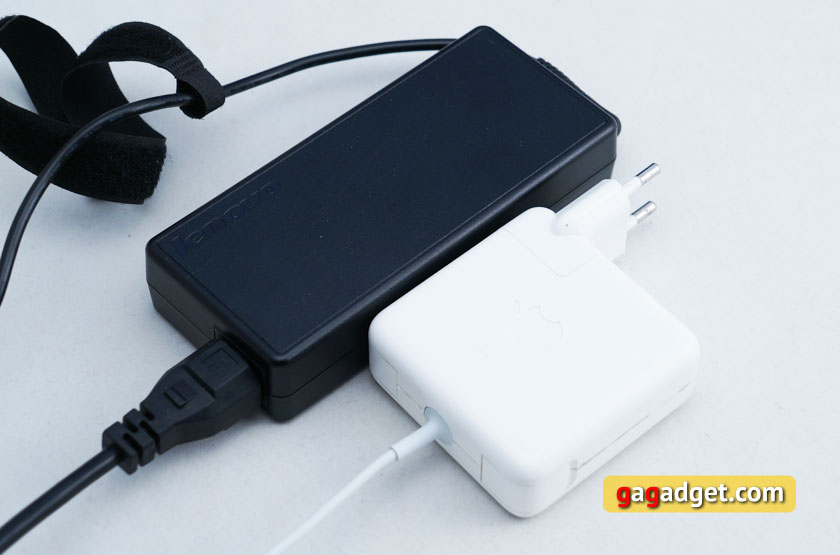 What about the appearance and design? 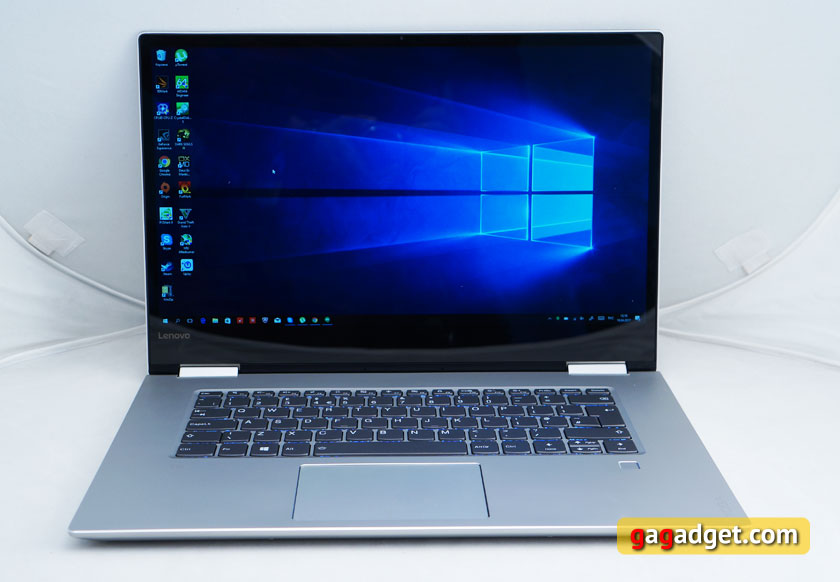 Case Lenovo YOGA 720-15 entirely made of metal. Though it is not a monolithic Unibody version, but too bad. The laptop is silver in color, except for dark gray buttons and a black screen panel. It is completely covered with protective glass, the top and side frames thin, the bottom — more. On the metal cover — only YOGA logo in the upper left corner: 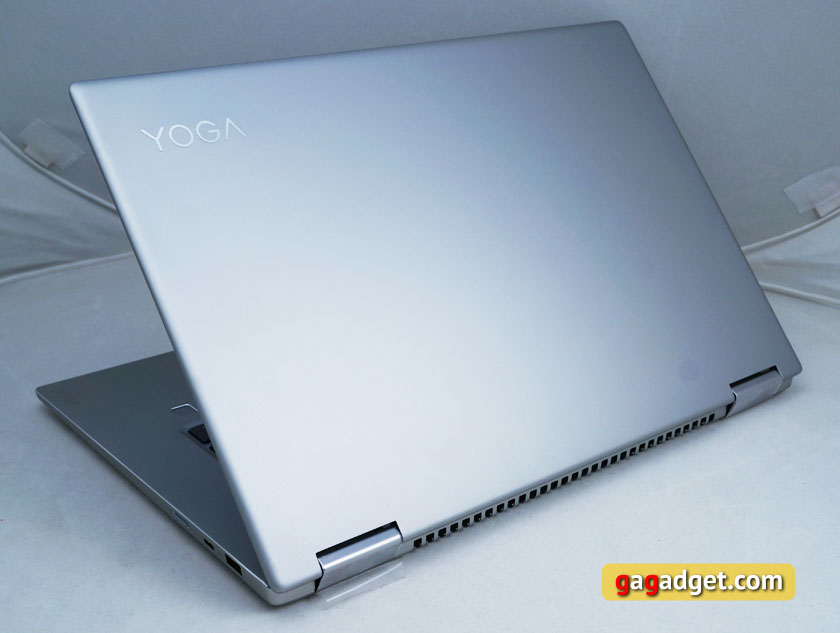 On the back side of a large grate for blowing hot air and two hinges. By design, they are typical of such convertible notebooks. A more advanced brand hinges of metal links Lenovo only installs top-end ultrabooks 900-series:

On the left side of the laptop is placed connector to connect power supply with led indicator, USB 3.0 port, combo Jack for headphones and microphone, and a hole with a reset button to factory settings:

Hinges allow to use laptop in presentation mode, tablet and “tent” (the keypad is automatically locked), cover with screen can be rotated 360° and is securely locked, but the hinges seemed too tight. About how to open the laptop with one hand and not talking:

READ  When waiting for the 10-nm Intel?

Above the screen is the web camera, around the perimeter there is a thin rubber strip to protect the screen: 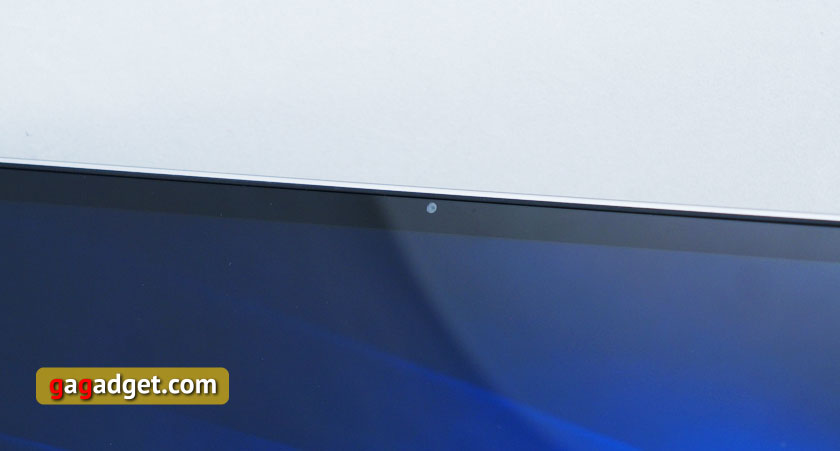 On the bottom of the hull — large grille for air intake cooling system and stereo speakers, which were developed jointly with JBL. They sound very good, but it is understood that this is a laptop and there are no miracles. The back is one solid elastic band, front are two rubberized feet, thanks to the laptop stand confidently on the table and does not slip. Itself bottom cover screwed by screws with the Torx drives. Visually, 10 of them (likely true), but there have been cases when a few screws are hidden under glued on rubber feet. Judging by the fact that the site says “Up to 16GB of DDR4 2133 MHz (Onboard)”, then change or add RAM will not work, so there is only access FROM and internal drive: 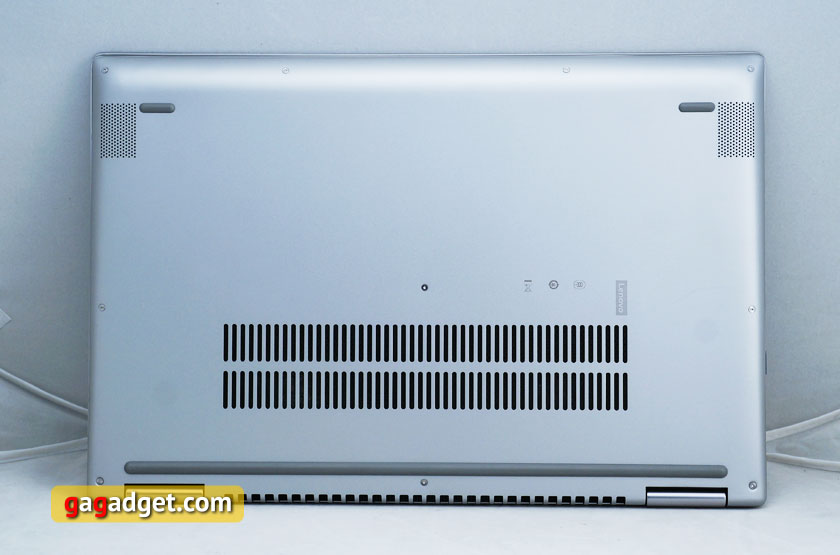 The laptop is quite large and heavy (2 kg), due to a 15.6-inch screen, powerful processor and discrete graphics card. Assembled very well, especially considering that housing is not monolithic. Looks Lenovo YOGA 720-15 soundly, but restrained.

How easy is the keyboard and touchpad? 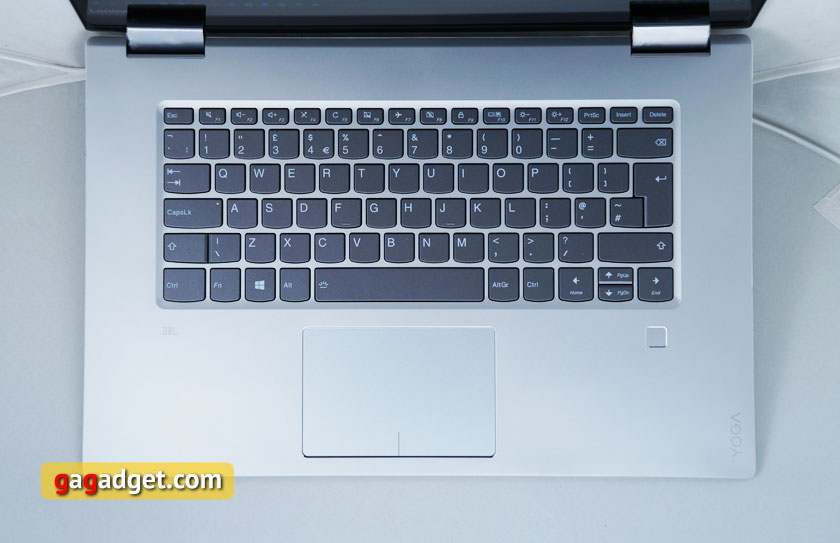 The whole working surface is made of metal, the keypad is traditionally placed in a small cavity. The fingerprint scanner is placed separately, it works fine. No complaints: fast and right the first time. The issue is the layout of the keyboard, Lenovo continues to some strange experiments, and next we see in YOGA 720-15. The top row of buttons has a reduced height, a common solution. The up and down arrows too small, with left and right — full. The block of arrows combined with Home, End, PgUp and PgDn. Long right Shift and the left for some reason decided to shorten and paste between it and the “Z” button “\”, I occasionally it fell instead of Shift. Another strange point — two-storied but narrow Enter, which is tightly inserted a “tilde”, to this point, too, need to get used to. We had a sample without Cyrillic symbols (therefore not for our market). It is possible that the layout in the commercial models will differ.

By themselves, the buttons are easy. They are a comfortable size, with sufficient mikeposner distance, you can easily move and response. There is a white backlight with two brightness levels: 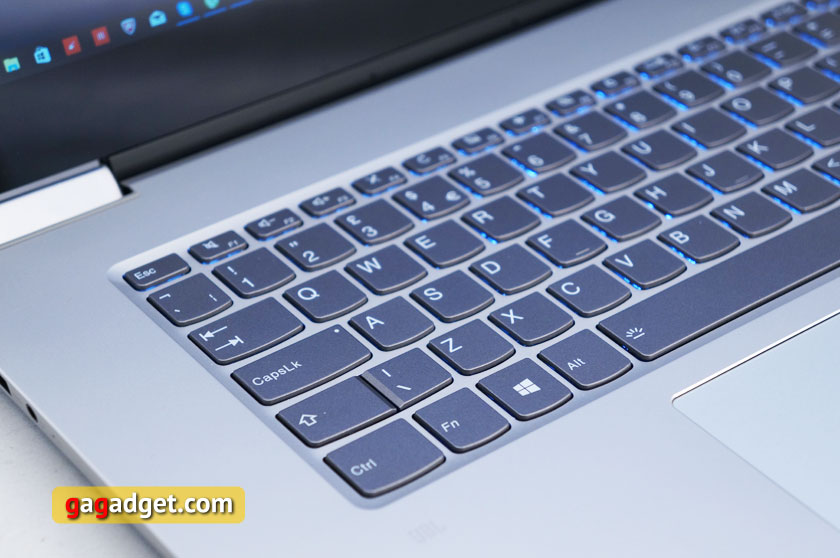 The touchpad is medium sized with good sensitivity and multitouch support. In operating mode it is completely quite and the mouse can’t connect. During use, I connected the mouse only for games: 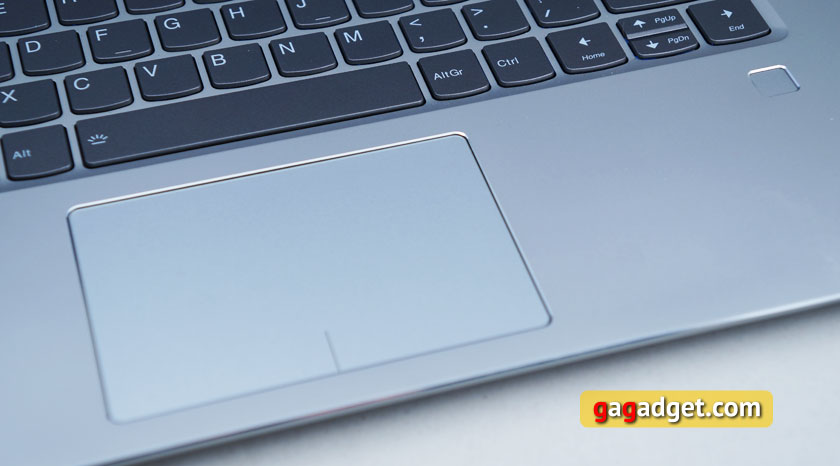 Lenovo YOGA 720-15 installed a 15.6-inch IPS screen with a resolution of 1920×1080, supporting pen input and multi-touch up to 10 touches. Optional will be configured with 4K Ultra HD (3840×2160). The screen is covered with protective glass, this means that glare will. The maximum viewing angles, the picture is very pleasant visually, but stock brightness is enough for comfortable work in the room. Outdoors in bright sun did not try, and not sure if this is necessary. Still, it’s not small and light ultrabook that you can carry with you all the time:

The colorimeter showed a rather modest maximum brightness 266.865 CD/m2, though for a laptop is not as critical as it is for smartphones. The brightness of the black field — 0.33 CD/m2 and contrast ratio of 809:1. Pleasantly pleased with the factory screen calibration: no significant distortions on colors no, the error ΔE is not more than 8, and color temperature throughout the range is very close to the reference 6500K. Color gamut is close to sRGB:

The performance and battery life? 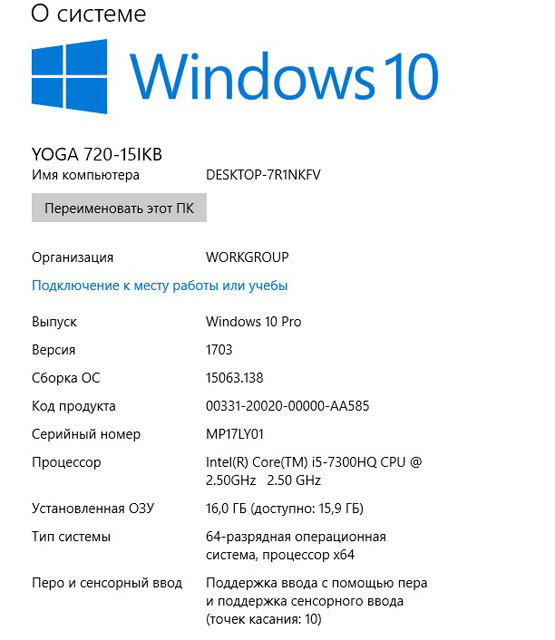 In the laptop installed Quad-core “adult” Intel Core i5-7300HQ on the architecture of Kaby Lake, the 13-inch models are equipped with a more modest ultramodnye processor U-series. Will be and the more efficient configuration with i7-7700HQ as in game models. Core i5-7300HQ — 14-nanometer processor with four cores with the standard frequency of 2.5 GHz (3.5 GHz mode Turbo Boost), Hyper-Threading is not supported. 6 MB cache L3, TDP is 45 watts. Integrated video card — HD Graphics 630, as in the older i7 7700HQ, but the maximum frequency just below: 1000 MHz (vs 1100 MHz). The amount of RAM in our sample, 16 GB (DDR4-2133), it is apparently soldered to the motherboard and replace it yourself will not work. The graphics is NVIDIA ® GeForce ® GTX 1050 with Pascal architecture, video memory — 2GB GDDR5. It contains 640 CUDA cores, base clock frequency is 1354 MHz, in Boost mode — 1493 MHz. This is the most modest laptop graphics card in the actual 10th line of NVIDIA, but it’s enough to play most modern games. Wireless modules in the laptop are represented Wi-Fi 802.11 ac and Bluetooth 4.1. 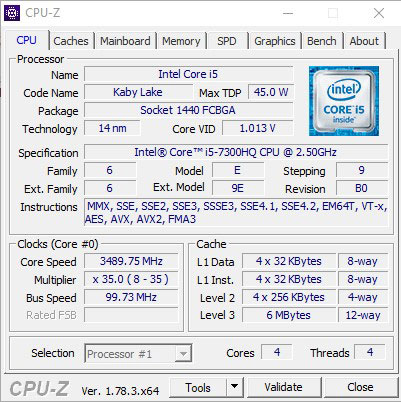 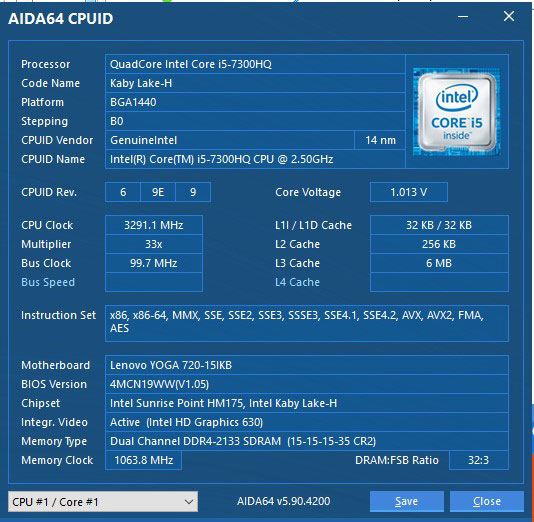 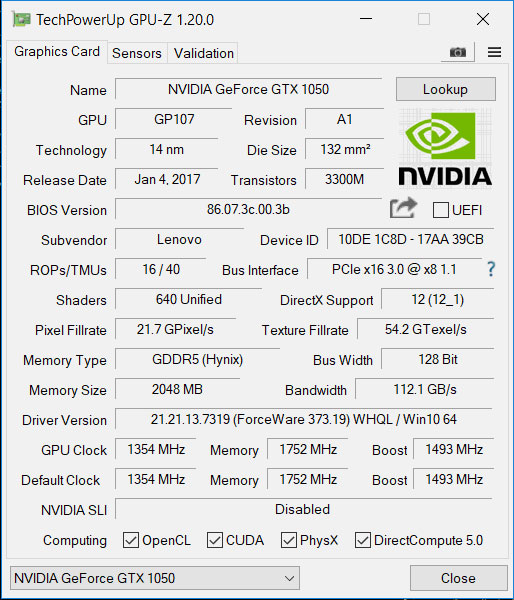 In PCMark the notebook shows quite good results in gaming tests is modest, but too bad:

Furmark was able to heat the graphics card up to 84°, then the temperature was raised, this is not to say that the cooling system was noisy stronger some comfortable limits: 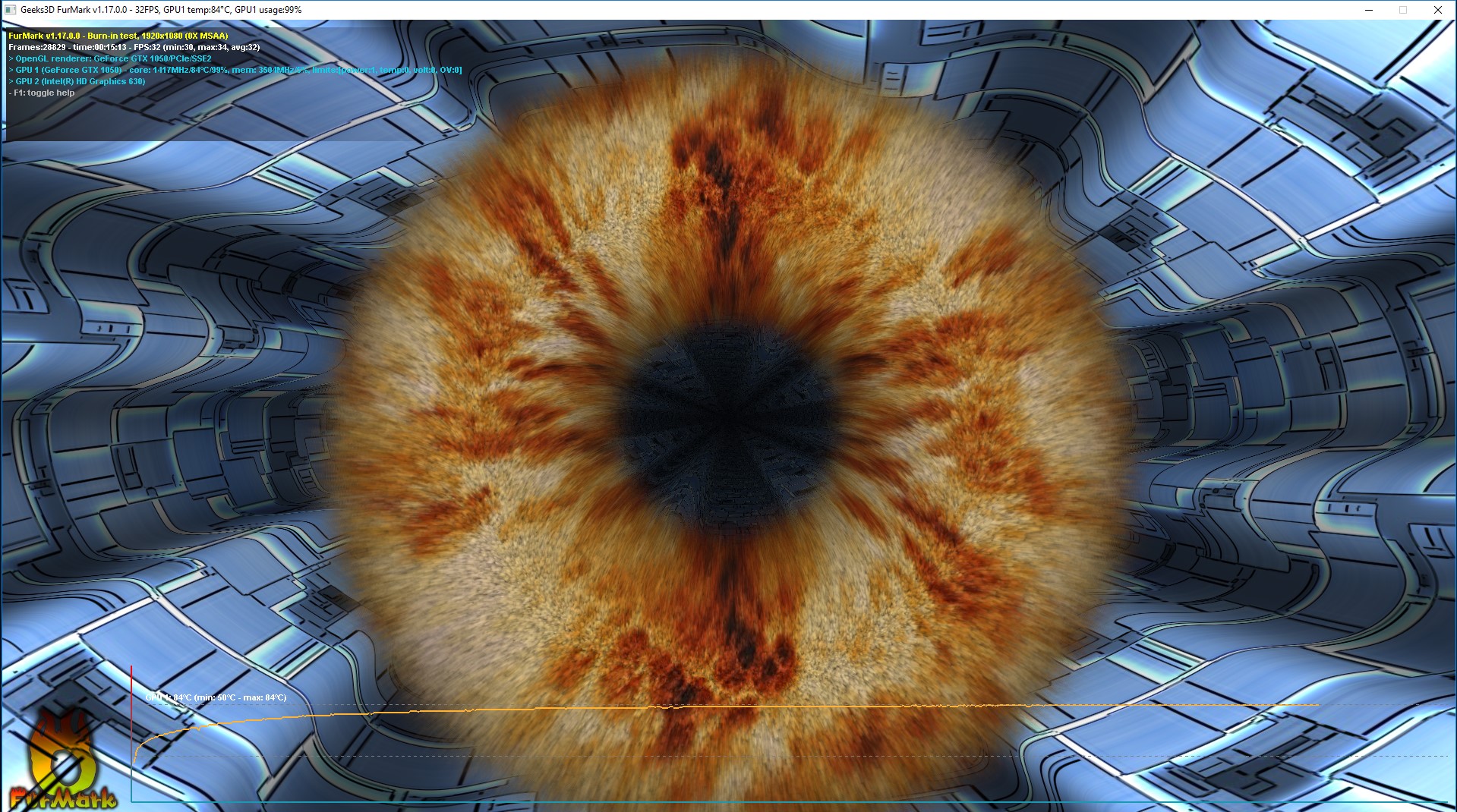 A stress test in AIDA64 showed that the processor, even after prolonged maximum load not warmed up more than 62°. By itself, no throttle there is no question: 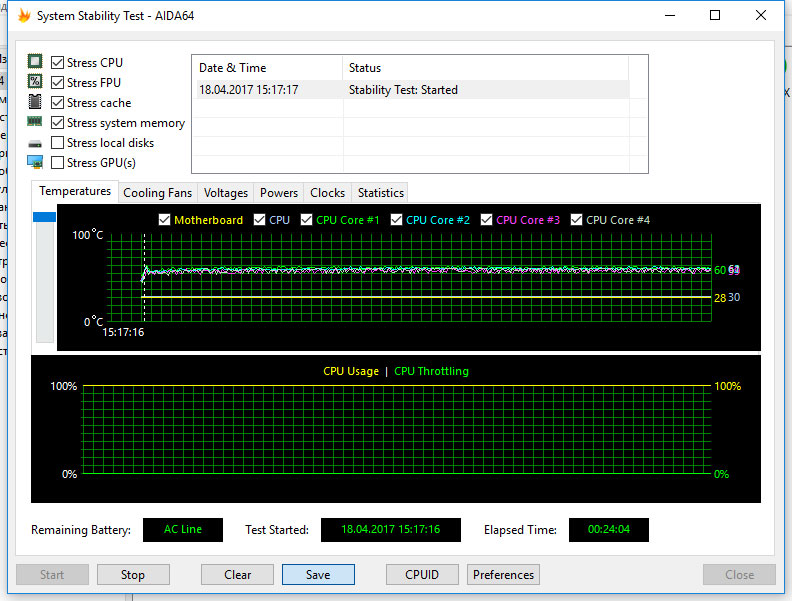 The laptop, installed the SSD Samsung MZVLW1T0 format NVMe M. 2 with a capacity of 1 TB. This is the top variant:

This model is an SSD we are already familiar for gaming laptop Lenovo Legion Y720. The drive shows a very high speed. In this case — a little over 2900 MB/s when reading and more than 1750 MB/s write:

READ  Technology in business: five products for geeks that will help earn

Despite the fact that Lenovo YOGA 720-15 not positioned as a gaming model, comfortable to play modern games quite real. Yes, the laptop does not give 60 frames per second, but below 25 fps frame rate in Dark Souls III and Deus Ex: Mankind Divided has never fallen:

The laptop uses lithium-ion battery 72 WHr, promise up to 9 hours version with FullHD screen (as in our survey), in what mode and with what level of brightness is not specified. In maximum performance mode with maximum brightness, the laptop lasted in Battery Eater: 2 hours 20 minutes. In the normal operating mode with web surfing, online video and minimal editing photos in Photoshop laptop lives just over 6 hours: 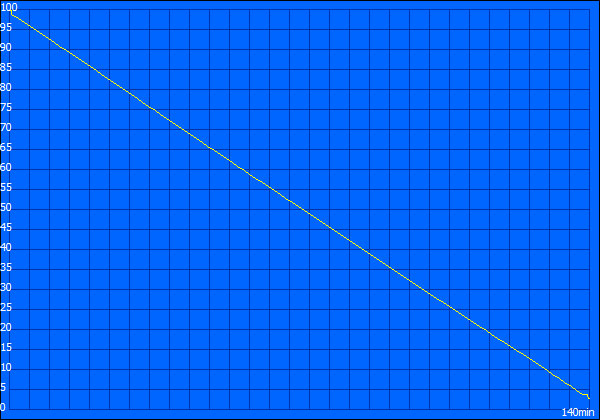 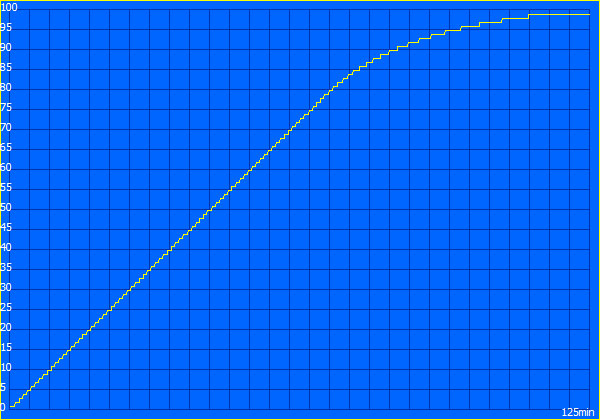 15-inch transformers — quite a specific and narrow niche of devices, as evidenced by the availability of only a few actual similar models. Lenovo YOGA 720-15 looks like their background is very interesting due to the use of efficient processor, not ultrasuoni line U and the discrete graphics current nVidia lineup. So filling enough for an everyday work tasks, but for video editing, and to play at desire it is possible to fresh game. The obvious advantages of a laptop is to add a well-calibrated IPS screen and very fast, high-capacity storage. The touch screen and the ability to use different modes can be stored in the pros the laptop (at least for those who are looking for exactly that), but now we are approaching the first downside: the joints. They are tight, and the absence of any notch or recess for the fingers further complicate the discovery process. Another controversial point is the unusual keyboard layout and the frequent false depression because of this.

READ  Students of MIT, NASA presented the project space of the hotel

Robert Saversky, HMD: “We are the only manufacturer which offers a 100% “pure” Android”
DJI Goggles: goggles to fly drones in first-person 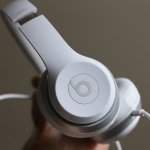 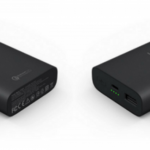 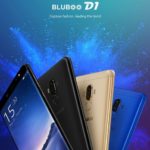