Explore the Universe with Friends in Star Trek: Discovery – Away Mission

Star Trek: Bridge Crew remains one of the coolest ways to experience both the Star Trek universe and VR, and part of the magic is working together with friends about the USS Aegis to complete missions and venture out into the stars. Sandbox VR, a company that builds fully-immersive interactive experiences designed for groups of people, has developed a brand new co-operative Star Trek experience built around Star Trek: Discovery, aptly titled the Away Mission.

This free-roaming adventure takes place within the walls of a Sandbox VR facility in either Hong Kong or San Francisco when it launches in 2020, and seems to feature a similar setup to other existing Sandbox VR titles. Players start off in the middle of a large, square room with their own backpack PC, VR HMD, and controller that’s specific to the experience. For example, in another Sandbox VR experience, Deadwood Mansion, players each have a large rifle-sized weapon that feels authentically real when in VR; a big tactile change from pretending to hold a gun with two VR motion controllers.

In Star Trek: Discovery – Away Mission, players will use a tricorder, fire a phaser rifle, be transported to an alien planet, and go to warp on the U.S.S. Discovery together, all while cooperating with each other in a wholly unique experience. Think of it as an escape room in VR, with aliens and weapons in addition to the logic puzzles you would expect out of a Star Trek experience, plus some extra bonus concepts thrown in that can only be achieved in a virtual world.

Sandbox VR is currently only available in San Francisco in the US but is working on additional locations later this year in Los Angeles and San Diego, New York City, Austin, and Chicago. The trailer for the experience seems a bit vague at times since there’s no actual gameplay or video of people playing, but other trailers for Sandbox VR experiences will give you an idea of what to expect.

The idea behind Sandbox VR’s experiences is to transport players to another world through a virtual experience, but it’s more than can be done at home. VR at home is immersive and transportive, but there’s still some part of the experience that feels less authentic simply because the virtual world doesn’t always translate perfectly to what’s happening in the real world.

Co-operative experiences with friends have become a rather popular outing, from the rise of escape rooms to virtual experiences that are being powered by new technology that enables new experiences.

In Silicon valley a growing number of people-cyborgs (6 photos) 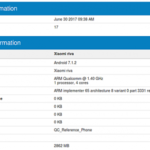 Xiaomi is preparing a smartphone based on latest version of Android

Here Are The Holiday Shipping & Return Policies For Major Retailers