The Samsung Galaxy Z Fold 3 and Z Flip 3 will likely be launching in July. Some rumors suggested it may happen in June, or sooner, but those rumors were inaccurate, it seems.

This information comes from Ice Universe, one of the best-known tipsters around. He did not flat out confirm it, but based on the information he has at the moment, that’s what’s going to happen.

This is a rather odd timeframe to announce both phones, if that’s what’s about to happen. Why? Well, the Z Flip’s successor will be considerably late to the show, while the Galaxy Z Fold 3 will be early, in a way.

Things may change moving forward, though

Do take this timeframe with a grain of salt, though, as nothing has been confirmed yet. Ice Universe does have the information, but he doesn’t seem fully convinced it’s the right one, at least not yet.

The Galaxy Z Fold 3 will be the very first device in the series to sport an S Pen. It will come with a dock, and it will essentially replace the Galaxy Note series altogether. The device is also expected to offer displays of a similar size to the Galaxy Z Fold 2’s, and more.

The Galaxy Z Flip 3, on the other hand, will likely have slightly larger displays, and will also be upgraded in many other ways. Not many specific details surfaced just yet, so we’ll have to wait a bit longer. 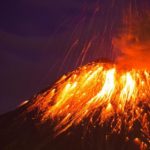 Scientists have “lost” a huge volcano

T-Mobile, Sprint Merger Could Be Put On Hold By The CPUC