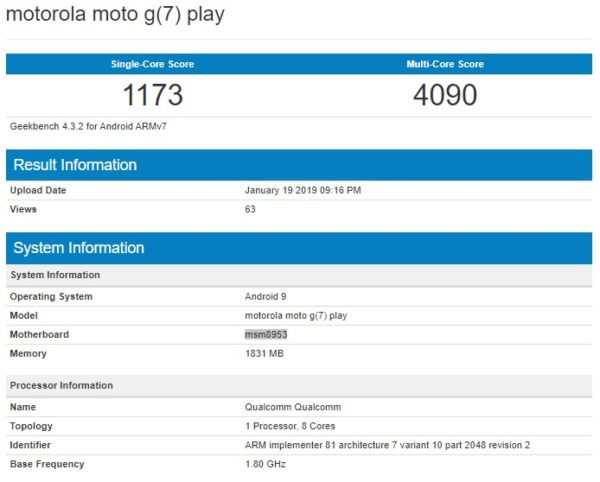 Motorola To Use Ancient Chip For Moto G7 Play: Report

A recently discovered Geekbench listing appears to be describing a variant of the Moto G7 Play that features the Snapdragon 625 chipset, identify it as the “moto g(7) play” suggesting Lenovo’s subsidiary will once again be making use of Qualcomm’s popular mid-range SoC that will be celebrating its third launch anniversary next month. The silicon uses an octa-core ARM Cortex A53 CPU running at a maximum clock speed of 2.0GHz and the Adreno 506 GPU. The same benchmark result shows that the Moto G7 Play will have 2GB of RAM and ship with Android 9 Pie.

Background: Recent rumors indicate the Moto G7 Play will be the cheapest of the four different models of the Moto G7 series. Aside from the G7 Play, Motorola will also release the G7 Power, the standard G7, and the G7 Plus. The low price of the handset will inevitably result in the device sporting weaker internal hardware compared to its more expensive counterparts. However, this information contradicts with the images submitted by Motorola to the Federal Communications Commission late last year, which shows that the device will sport the Snapdragon 632 chipset and a 3,000mAh battery. Furthermore, if the information in the benchmark result is correct, the G7 Play will sport a chipset that was first unveiled by Qualcomm almost three years ago.

Earlier leaks also included device renders that detailed the design of the Moto G7 lineup. The cheaper Moto G7 handsets, the G7 Play and the G7 Power, sports a different handset design compared to the more expensive smartphones in Motorola’s mid-range product lineup. The Moto G7 Play will feature an elongated notch above the handset’s display, and this notch will house the device’s front-facing camera, earpiece, and additional sensors. The circular camera bump at the back of the handset features a single rear shooter and an LED flash, while users may find the rear fingerprint sensor below the smartphone’s imaging setup. The right side of the device contains the power button and the volume rocker, while the bottom of the display houses the USB Type-C port, the 3.5-millimeter headphone jack, and the bottom-firing loudspeaker. In contrast, the more expensive G7 and the G7 Plus will feature a waterdrop-shaped notch above the screen and two horizontally-arranged cameras at the back of the device.

Previous reports also provided information about the pricing of the Moto G7 lineup. According to recent rumors, Motorola will price the Moto G7 Play at around $170, while the Moto G7 Power will ship with a price tag upwards of $210. On the other hand, the G7 and the G7 Plus will likely have higher prices than the two devices. Recent reports also state that the Moto G7 Play will be available in Gold and Blue color variants in Europe and FCC test documents also show that the Motorola may also sell the smartphone in solid black color.

Impact: If the newly emerged rumor is correct, the inclusion of a three-year-old chipset Moto G7 Play variant is an interesting decision on Motorola’s part, to say the least. Such an unconventional decision may illustrate just how desperate Motorola is to cut costs and make the most of its Android handset business that’s still largely hit-and-miss across product categories, as has been the case for many years now. 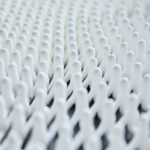 “Liquid” 3D printing and any sizes