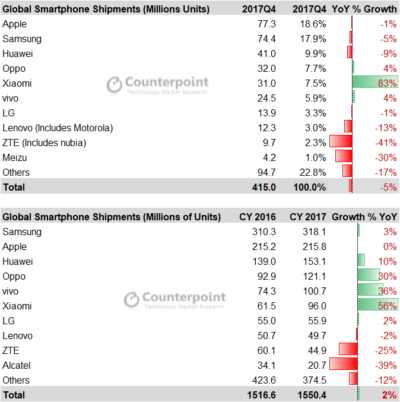 Samsung lost its title of the world’s largest smartphone vendor by shipments over the fourth quarter of 2017, having once again been surpassed by Apple, according to a new study from Counterpoint Research. While global smartphone shipments for the entire 2017 reached a new annual high of 1.55 billion, the final quarter of the year brought a slight decline, with original equipment manufacturers recording 415 million shipments in total, five-percent down year-on-year. The three largest smartphone vendors on the planet all had their shipment numbers reduced compared to the same period last year, with Apple being the least affected party with a decline of just a single percentage point, shipping 77.3 million iPhones in total. Samsung’s numbers fell by five-percent to 74.4 million units, with Huawei remaining third on the list but shipping “only” 41 million smartphones, nine-percent fewer than in Q4 2016.

Out of the top ten largest OEMs in the world, ZTE experienced the most significant decline in shipments, with its business shrinking 41-percent and leading to just 9.7 million mobile devices being sent to retailers. BBK Electronics-owned OPPO and Vivo both grew their operations by four-percent over the three-month period and were the only ones to do so along with Xiaomi, by far the fastest-growing OEM in the industry in Q4 2017. The Beijing-based consumer electronics maker shipped 31 million handsets during the quarter, 83-percent up year-on-year, with its growth primarily being attributed to its surge in India where it’s presently challenging Samsung for the title of the largest local smartphone company. Some industry trackers are claiming Xiaomi already surpassed Samsung in that regard, though the Korean firm is quick to deny that possibility by claiming it’s still leading the market in sales. Xiaomi’s dominance in shipments that Counterpoint also noted is likely a result of its offline strategy that’s been growing increasingly aggressive in recent times, involving subsidies and other benefits for retailers who agree to prominently feature the firm’s products as preferred partners.

Counterpoint also noted BBK’s two mobile companies managed to surpass Apple’s full-year shipments for the first time ever, delivering over 221 million devices as opposed to 215 million iPhones. Samsung was still the busiest OEM over the entire 2017, shipping more than 318 million smartphones, much more than the second-placed iPhone maker. It’s presently unclear whether the global smartphone market will continue growing at this incremental pace due to serious signs of saturation in the West, though India’s demand for mobile devices is still expected to continue rising in the coming years.

What Is Xbox Live Gold? Everything You Need To Know 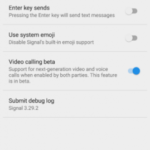