Speak of electric vehicles and the first name that pops up in our head is Tesla. Being run by Elon Musk who has been compared to Iron Man of our times more often than not, Tesla lately topped the charts by becoming the most valuable automotive company in the world. One thing that Tesla’s success proves is that the world still values innovation. Inspired by Tesla’s habit of pushing the envelope, the product designers can’t stay far behind in their conceptual designs and the collection showcased here tells the same story. Each angular, edgy and innovative design inspired by Tesla is designed to take the automotive world by storm!

Named after the very man who pioneered the edgy, angular, low-poly aesthetic, the Brubaker Box by Samir Sadikhov is a minivan inspired by the designs of Curt Brubaker – whose work also directly influenced the design of the Tesla Cybertruck. The Brubaker Box is essentially designed for families who want to adopt the Cybertruck aesthetic without necessarily buying a pickup. Made possibly for edgy soccer moms, the minivan comes with a slightly softer low-poly design that’s more approachable and friendly (after all, you want to look more like a family person and less like you’re Mad Max-ing your way through life).

If any company had to build something as outlandish as a pod system with a fixed electric powertrain platform and an interchangeable upper pod based on use, it would probably be Tesla. Designed as a part of his thesis project, Fábio Martins’ conceptual Tesla Pod system is pretty intriguing and especially makes sense, given that Musk is launching the Boring Tunnel project that will only work with a handful of cars that are compatible with the underground travel system. The idea for the Pod is simple. The electric powertrain base is common to all modes of transport, while the upper part alternates between three different pods that serve three different purposes… one for public transport, one for private transport, and one for commercial transport.

Designed with sheer attention to detail, the pickup is envisioned as a part of Tesla’s Model P series, by Istanbul-based designer, Emre Husmen. The conceptual Model P (let’s just call it that for now) is a brilliant exercise in brand and form semantics… that’s a fancy-design-jargon way of saying that it looks exactly like something Tesla would launch. With the beautiful razor-thin headlamps and taillamps, the absence of a radiator-grille on the front (thanks to its electric build), and aesthetic features and detailing that are just innately Tesla, the conceptual pickup truck looks both fast and dominating together. It comes with a four-door setup and a pretty high ground clearance. An off-road Tesla? I’d quite like to see that, Mr. Musk.

The Tesla x SpaceX x BTTF combination comes from the mind of Charlie Nghiem, a maverick automotive designer who’s even made a Tesla x Rimowa concept collab. This holy-trinity mashup features both of Elon Musk’s current ventures, electric automobile company Tesla, and space exploration venture SpaceX, along with an unlikely third, the DeLorean from Back To The Future (Musk is a Rick and Morty fan, so maybe he loves BTTF too?) The car looks like a pimped out Tesla Roadster complete with all the trims and the massive afterburners from the BTTF automobile. The car’s even got a hoverboard casually resting against its side, and features a SpaceX logo at the base of the C pillar, because where they’re going, they don’t need roads.

Created by automotive designer Alex Baldini Imnadze, the SpaceTruck is a concept created as a dream collaboration between Tesla and SpaceX. Unlike Tesla’s original semi-truck, the SpaceTruck is more situation-specific, designed to transport rocket parts and the Dragon crew around and between facilities. Citing Syd Mead as his primary source of inspiration, Baldini says the SpaceTruck was created as an effort to embrace ‘Astro-design’, creating a vehicle that visually represented the space-age we’re currently in. The SpaceTruck’s design language mimics the Dragon Crew Capsule, with a similar white and black color combination. Needless to say, the truck is entirely powered by an electric drive-train and features a cockpit that sits above all the machinery, jutting out too, to slightly resemble the SpaceX astronaut helmet.

There’s an obvious lack of two-wheelers in Tesla’s product portfolio, and James Gawley took it upon himself to fill that void, at least with a concept. Meet the Tesla Model M… designed to make electric bikes more of the status quo, the Model M comes with a unique aesthetic that deliberately chooses to create a negative space in its design where the fuel-tank would be, almost poking fun at its fuel-guzzling ancestors. The bike’s curvy outer body harks to the curvilinear design-language of its sedans like the Model X and Model S, and a massive dashboard occupies a significant amount of space where you’d expect the fuel tank’s inlet – giving you a whole host of data from your speed and battery level to the bike’s performance and even a detailed map to help you navigate.

Powered by the kind of AI you’d find in autonomous vehicles (with 4K cameras and sensors that can accurately identify objects in her path), the Toadi is practically the Tesla of lawnmowers. Designed to work less like a robot and more like a living organism, the Toadi reinvents a category that hasn’t seen a significant-tech upgrade… and yes, Toadi is a ‘her’. The Toadi uses 4K cameras to ‘see’ the way humans do. She accurately differentiates between grass, gravel, cemented paths, and even identifies and avoids objects like animals, toys, flower-beds, and fences. Using a sensing and tracking system that’s much more superior to the LiDAR sensors and GPS chips found in home-cleaning robots, the Toadi effortlessly moves around the lawn on her own, mowing in straight lines, crossing over to other parts of the lawn if need be, avoiding flower-beds, objects, or pets (and other garden animals), and staying clear off fences.

If Elon tweeted the Cybertruck design as a cool designer-made concept, I’d definitely appreciate it for its game-changing design. That being said, the Cybertruck has also sparked its fair share of design concepts created using the low-poly design language as inspiration… and I’ll be honest. Some of them are pretty dope. Take for instance the Rimac 2080 Hyper Cyber, a concept by 3Dmente Digital. Designed as a part of Rimac’s Design Challenge on Instagram, the Hyper Cyber is an edgy, retro-techno-punkish bike with a low-poly body in the signature metallic finish. The bike sports an unusual seat design that’s molded in a single piece, with negative spaces that give it a cushioning effect, and quite like the Cybertruck, it’s missing rearview mirrors too.

Antonio Paglia sure seems to think the Tesla Helicopter is well on its way. Built in a time where Tesla’s batteries will be able to power large manned airborne vehicles, the Tesla Helicopter carries the company’s DNA, both physically and spiritually. Designed for efficiency and speed, the Helicopter would do well in departments like safety and patrol, allowing the administration to effectively patrol the skies and ground while even in some cases offer assistance in an emergency. Thoughts, Mr. Musk?

Designed for the Cybertruck patron, Tesla enthusiast, and lover of all-things-electric, the Cybunker by Lars Büro is literally styled on the polarizing polygonal design of the pickup truck which launched a month ago. Made to work off the grid, the bunker comes with a roof of solar panels that power its interiors, even providing juice to the two cars that can fit into its garage, accessible by the two folding gates that open just like the Cybertruck’s ‘vault’. The 1800 sq.ft. possesses the ability to double up as an apartment, shelter, storage, or space for commercial activities. Under it lies its infrastructural ‘motherboard’ which houses all of the unit’s utilities and computer systems, as well as the battery bank that stores all the energy generated by the roof. 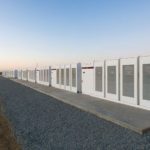