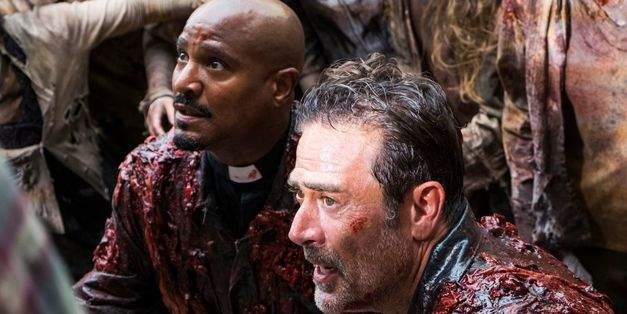 ‘The Walking Dead’: How Zombie Blood Could Help Negan Win ‘All Out War’

SPOILER ALERT: This post contains spoilers from Season 8, Episode 11 of The Walking Dead, entitled “Dead or Alive Or.” Proceed with caution.

Negan’s plan, outlined at the end of Episode 11 — “Dead or Alive Or” — was like a lightbulb moment for the The Walking Dead villain. An idea sparked by something Eugene said about terrorising their enemies with walker parts catapulted over the walls led Negan to formulate a new plan of attack. They’ll smear their weapons with zombie blood and wage biological warfare.

In theory, a simple scratch caused by Negan’s barbed wire-wrapped baseball bat, Lucille, or a graze on the leg from a knife, would be enough to pass a death sentence to whoever is on the receiving end. At the same time as solving their lack of ammo issue. The biggest puzzler about this, however, is that we haven’t seen the effects of zombie blood entering the body through wounds before. So how can Negan be sure it will work?

Up to now, we’ve only seen people turn by dying, or through the infection being passed on via a walker bite. There was a theory that Father Gabriel’s recent sickness was the slow onset of the infection caused by wearing walker guts as he and Negan escaped from the hut that was surrounded at the Sanctuary. But in Episode 11, following the discovery of some antibiotics, Gabriel started to take a turn for the better. Which suggests that his sickness was some other infection — no doubt caused by the decaying matter he’d covered himself in. That stuff is nothing if not unsanitary.

On TWD aftershow, Talking Dead, series producer Denise Huth suggested that Gabriel has been suffering from septic shock — defined as a dangerous drop in blood pressure following an infection, resulting in failing organs due to a lack of blood and oxygen.

“The science we never really know, we’re not really understanding how the zombies occurred in the first place in this world, but it makes sense,” she said. Which supports the notion that Gabriel’s infection is not the same as the one that zombifies you, but that it was caused by the gut-smothering incident. Either way, without the antibiotics he and Dr Carson found, Gabriel would certainly have died from his illness. Which makes Negan’s plan one that could work.

Huth went on to hint that Negan has experienced the effects of smothering yourself in zombie guts before.

“It’s interesting,” she said. “I always loved in that episode back in 8×05 where Negan says to [Gabriel] when they start to do it: ‘Haven’t any of your people ever gotten sick doing this?’ So that was sort of an indication that Negan had seen that happen.”

She underlined the fact that we don’t yet know how getting zombie blood into the body via an opening might affect a person: “It’s a question mark”.

While we know that getting bitten is a sure-fire route to dying and turning (unless the bite is on a limb and it’s removed in time to prevent the spread of infection), Huth says we’re still asking: “What happens when those guts get in your eyes or mouth?”

Incidents Past Are Inconclusive

The question of exactly how the infection is transmitted is something that’s been asked in The Walking Dead before, but it’s never been conclusively answered or explored in great depth. Back in Season 2, Episode 4 — called “Cherokee Rose” — introduced the well walker, a zombie that had fallen into a well. With worries around it infecting the water supply, Rick’s group tried to find a way to extract it without killing it in situ — using Glenn as live bait — lest its guts fall into the drinking water. They failed and had to seal off the well. But we never saw the effects of anyone drinking the water.

Then, in Season 5, Episode 3 — called “Four Walls and a Roof” — Bob revealed to Gareth, who had been chowing down on his amputated leg, that he’d been bitten. “Tainted meat!” he cried, laughing. The suggestion was that eating infected meat would lead to infection. Or, at least, that they worried it might. Unfortunately, Gareth was killed by Rick before we could find out the effect eating Bob’s infected leg would have on him. Other Terminants who ate the meat didn’t seem to be affected. It’s worth pointing out that the meat was cooked which could have made a difference.

There’s also the matter, in Season 7, of the people at the Kingdom feeding the pigs they supplied to the Saviors on walker guts. We’ve never seen if this had an effect on any of Negan’s people, but we’re guessing it didn’t. Possibly because any meat they ate would have been cooked, and also possibly because the infection doesn’t spread to animals. Otherwise, there would likely have been an epidemic of unexplained walker transformations at the Sanctuary that would certainly have caused a stir worthy of showing.

While this latest turn of events finally offers a plausible explanation as to why Rick and co. don’t smear themselves in walker blood and guts more often, it does throw up problems for another chapter in the Walking Dead saga. If they’re to introduce the Whisperers, a villainous group from the comic-books about whose entry into the TV series there’s been speculation for some time, it could spell complications. Should Negan’s plan prove effective, it renders the Whisperers’ habit of wearing the skins of walkers extremely challenging, to say the least… 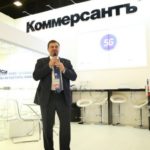 Set a new speed record for mobile Internet in Russia 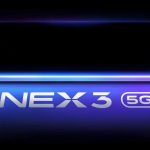