Samsung, the global leader in smartphone innovation, could be working on yet another interesting smartphone form factor. While camera upgrades and bigger batteries have been the major focus for OEMs lately, with pretty much everything else reaching a tipping point as far as the hardware is concerned, the Korean behemoth may have a niche idea to set its Galaxy smartphones apart from the competition.

A recently discovered patent application from Samsung reveals that the company is exploring a smartphone design with a speaker resonance chamber. Yes, the No. 1 smartphone vendor in the world wants to offer pro-grade sound quality on a smartphone.

Samsung had applied for this patent with the WIPO (World Intellectual Property Office) earlier in February this year. WIPO published the patent titled “Electronic device having expandable internal space” last week, along with 35-page documentation describing this implementation.

According to the patent documents, Samsung is looking to fit this smartphone with a sturdy back panel and a flexible upper body. All internal components of the phone are attached to the upper body. This flexible part can move slightly forwards to create a speaker resonance chamber between it and the back panel.

Samsung will likely fit multiple speakers in and around this movable part to achieve a pro-quality sound. Speakers will be placed on both sides of the phone for the stereo effect. A cooling fan underneath will help in heat dissipation.

The patent documents mention the use of a plastic polymer display. Samsung used this type of flexible display on the Galaxy Fold. The company has since introduced a more scratch-resistant Ultra Thin Glass (UTG) with the Galaxy Z Flip. The Galaxy Z Fold 2 also features a UTG panel. Since Samsung reserves the right to use any material it wants, this phone, if it sees the light of day, will likely get a UTG panel as well, or who knows, the company may also have a more advanced flexible display technology in the works.

Interestingly, there’s also a mention of stylus support. The current generation of Samsung foldable phones don’t support the S Pen. But there have been reports of the company working in this regard as well. So expect S Pen support to come to foldable Galaxy smartphones in the future.

Last but not least, this patent shows a phone with more of a rectangular body rather than a rounded one we are used to seeing on Samsung smartphones. Perhaps this a futuristic device and the Korean company is mulling some design changes as well.

When will this futuristic Samsung smartphone arrive?

As with any other patent application, there’s no way to confirm that Samsung is actually working on this smartphone design. However, this does show that flexible displays can open up a lot more possibilities for smartphone design and form factor.

OEMs are already exploring ways to enhance the sound quality on smartphones so there’s a good chance that this design by Samsung will see the light of day. However, that certainly won’t happen in a flash. This futuristic phone is literally one for the future. 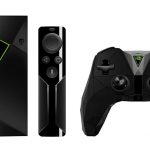 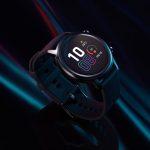 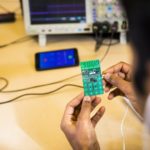