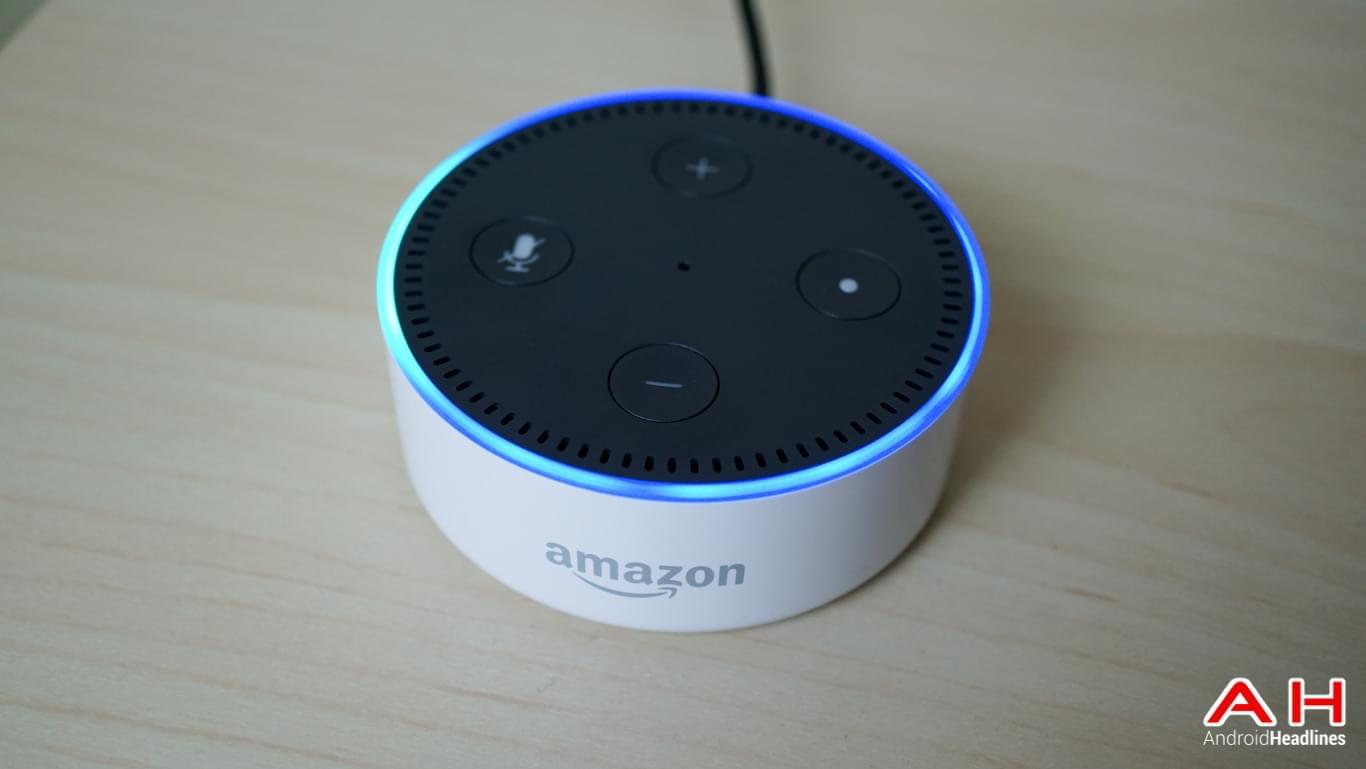 Whisper Mode Comes To Amazon Alexa, Here’s How To Enable It

In short: Amazon had teased that Whisper Mode was coming to Alexa, and now it is finally here. It is essentially a mode for Alexa to speak quieter to you, and also hear you while you are whispering. The mode is good for using while others are sleeping in your home, and you don’t want to wake them up but need to use Alexa to turn off the lights, or arm your alarm system or something like that. Now you can whisper to Alexa and she will be able to hear you. This is because of the many microphones that are included in Alexa-enabled speakers. Amazon actually previewed this feature as long as ago as last year. This was when Amazon opened its Speech Synthesis Markup Language for developers, and Amazon said that Alexa will “automatically learn the features of audio signals useful for detecting sound events or whispered speech.” Whisper Mode is using machine learning, so it will get better at recognizing your voice over time. But the real question here is, how do you turn it on? Let’s explain.

How to turn on Whisper Mode Using Amazon Echo 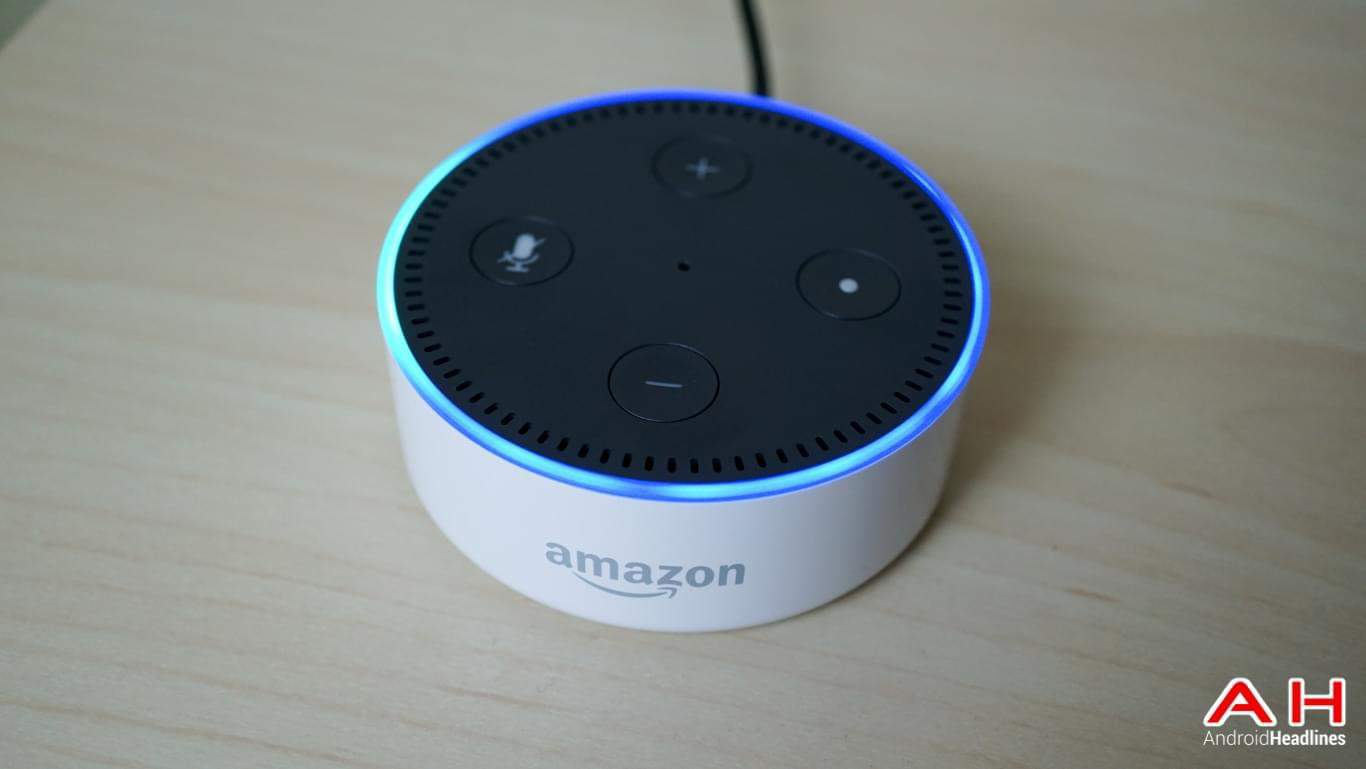 It’s very simple to turn on Whisper Mode using your voice on Amazon Echo. Simply say “Alexa, turn on Whisper Mode.” Afterwards, Whisper Mode will be turned on, and you’ll be able to talk to Alexa in your quiet indoor voice. Currently, Whisper Mode only appears to work on Echo devices. We have attempted to whisper to third-party speakers that have Alexa built-in (like the Harman Kardon Allure), but Alexa doesn’t whisper back.

How to turn on Whisper Mode Using Alexa App 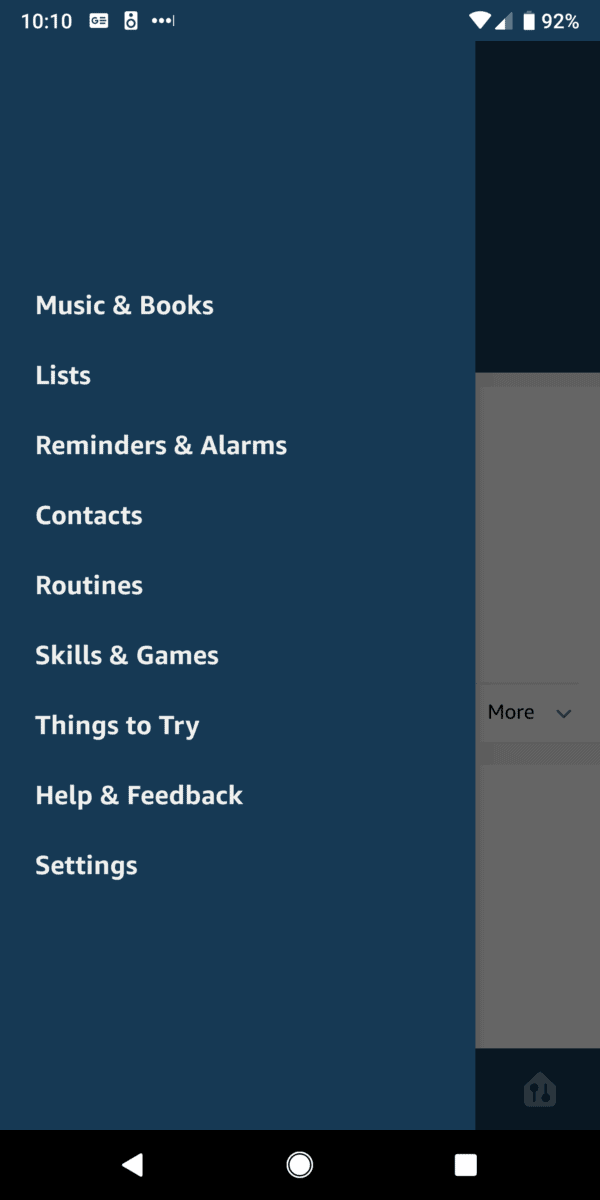 There’s a few more steps required to turn on Whisper Mode using the Alexa app – and most people will likely turn it on using their voice. First you’re going to want to go to the Alexa app and go to Settings. 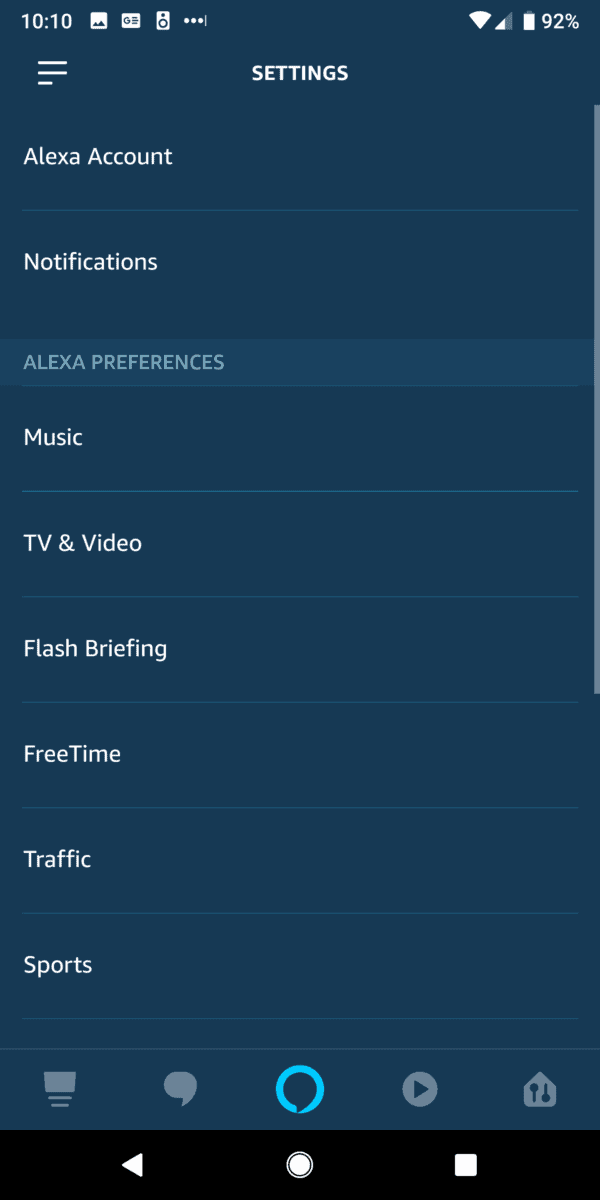 From there, you will want to tap on your Alexa Account, which will be the first option in the settings. This will give you the options for your Alexa account in general. 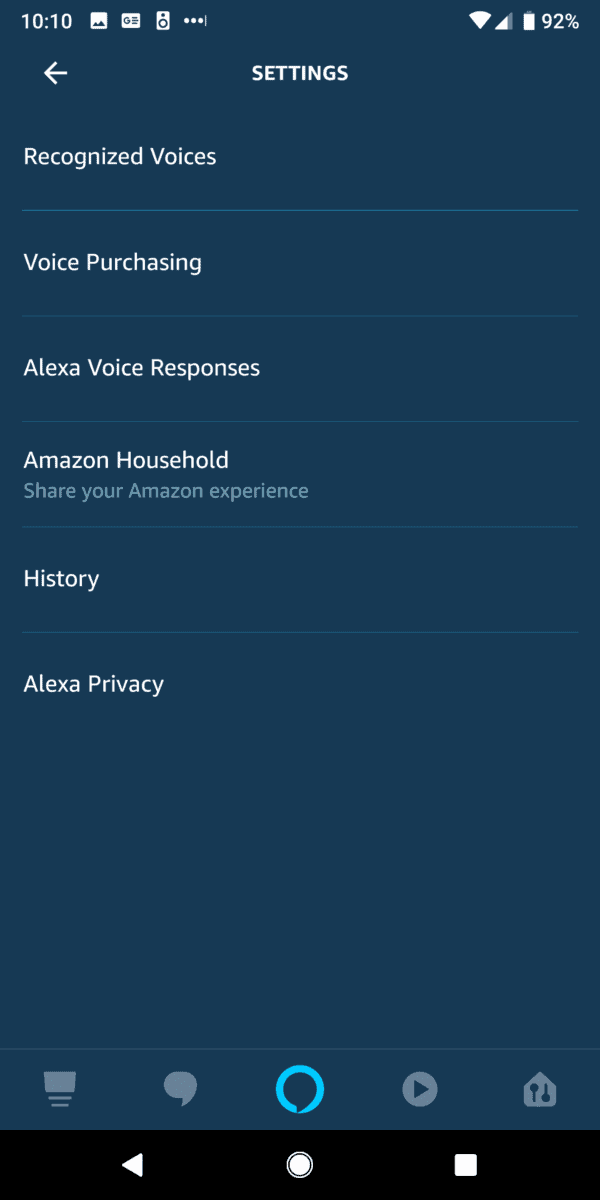 After that, you are going to tap on Alexa Voice Responses. As you can see from the image above, it should be the third option down, just below the “Voice Purchasing” option. 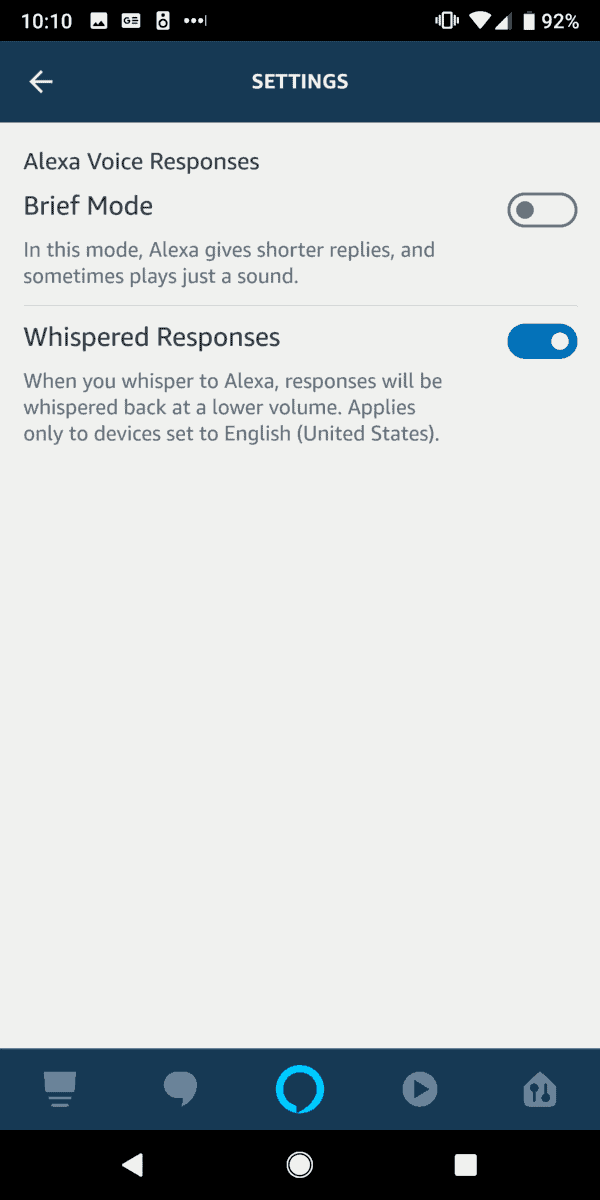 Now, just toggle on the “Whispered Responses” option. The setting does also explain what Whispered Responses actually is. It will whisper back to you when you whisper at Alexa, but it also only applies to devices that are set to English (United States), so it’s not quite US only but close enough. You can choose to toggle this on or off whenever you want. But remember that when you do not whisper to Alexa, she won’t whisper back. Whispering to Alexa is what triggers the whisper mode.

Background: Amazon first showed off Whisper Mode, or Whisper Responses, last year, but it was announced last month as arriving soon for Alexa. Now it’s finally here. It was a very much requested feature for Amazon Alexa (and Google Assistant, though Google doesn’t have this feature yet). There’s a pretty simple reason for why users have been requesting this feature, and that is because sometimes you’ll ask Alexa something – like the weather, or to set an alarm – and then she answers much louder (leading you to wonder when you turned the volume up so loud). Now with whisper mode, that’s no longer an issue, she’ll respond to you in a very low volume, and it actually sounds a bit creepy. But that’s fine as long as it’s not that loud.

READ  Users in many countries complain of the failure of Skype

It’s pretty incredible that Amazon is able to do things like this with Amazon Alexa, seeing as she is still able to hear you, even from across the room, while you are whispering. Of course, a big part of this is the eight microphones that are included on most Amazon Alexa smart speakers these days, and having those extra mics are definitely helpful. Compared to Google Home which only has two microphones, and when one decides to die, it makes it tougher to get the Assistant’s attention. That’s not an issue with Amazon Alexa, luckily. It likely won’t be long  until Google rolls out its own whisper or quiet mode for Google Assistant, seeing as Amazon has already done it. And the two usually roll out features pretty close together. Google may actually be able to do it better, considering it has been working on Artificial Intelligence and Machine Learning far longer, so they have even more experience with it.

Impact: Amazon Alexa is currently in the lead, as far as personal assistants go, at least according to most people. While Google is better for answering questions, due to the knowledge graph and it having the power of Google search behind it, Alexa is better at mostly everything else. That includes controlling smart home products, as well as adding in new features to make Alexa more helpful. Of course, a big part of that is due to the skills that Alexa has, and thanks to Amazon working with developers so closely. Amazon Alexa still has more functionality than most other personal assistants, and that is definitely not a surprise. Now with Whisper Mode here, it is going to really pull ahead.

Whisper Mode will likely be used by parents or those that have a lot of people living in their home, quite a bit. Imagine asking Alexa something only to hear her yelling the response to you and waking up your newborn baby. Definitely the last thing you want. While the whispering of Alexa might still wake up some people, since it’s not entirely quiet, is it much quieter than non-whispering Alexa. It’s unfortunate that it is only available in US English right now, but that is because Alexa needs to learn the voice cues for other languages when people are whispering first. It’s not an easy feature to roll out, especially for multiple languages. But we do know that Alexa is working on it, which is important. 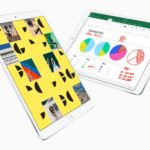 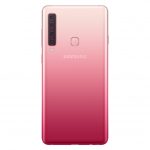 Tablet or laptop: which is better?